Total revenue jumped 26% to 1.3 billion euros ($1.5 billion), and gross margin expanded on a sequential basis to 25.8%. Costs also continue to rise, though, which led to an operating loss of 90 million euros ($105 million). That operating loss included a 32 million euro ($37 million) tax hit related to stock-based compensation and strong stock performance after going public.

Spotify incurred significant finance costs during the quarter, primarily related to changes in the fair value of its convertible notes as well as costs associated with its direct listing that occurred at the beginning of the quarter. Note that Spotify has since converted all of that debt to equity, and going public is also not a recurring event, so elevated finance costs should now be in the rearview mirror. 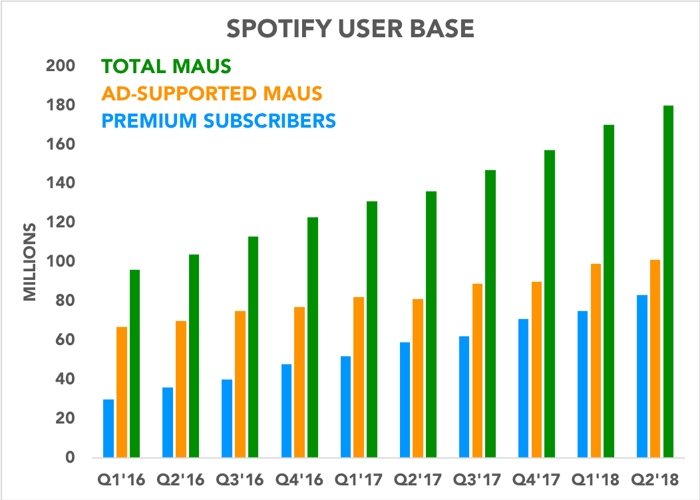 Premium average revenue per user (ARPU) continued to trend lower, in line with the company's strategy of growing family and student plans. Those plans include discounts, but also enjoy much higher retention rates, reducing premium churn. Churn declined by about 90 basis points compared to last year, to approximately 5%. 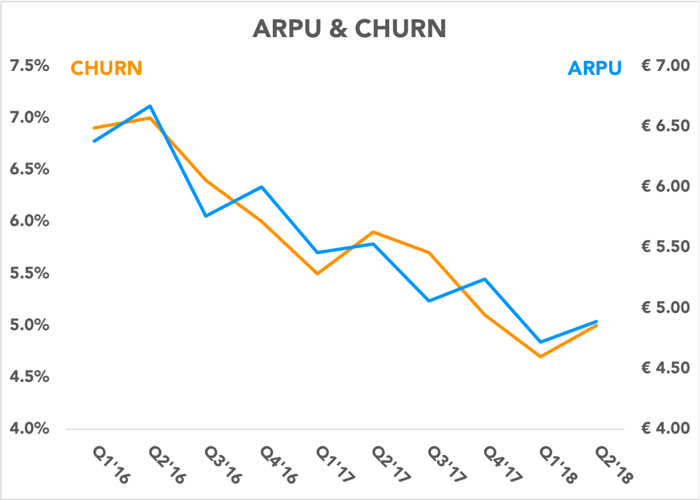 The trade-off between lower ARPU in order to reduce churn is well worth it for the long-term health of the business. CFO Barry McCarthy shot down any speculation that Spotify's U.S. churn has been rising due to competition from Apple Music, noting that Spotify has "seen improvement in the U.S.," including the most recent quarter.

About those direct licensing deals

Spotify has reportedly been wooing independent artists with direct licensing deals, which has the potential to reduce royalty costs while also expanding the number of creators on the platform. CEO Daniel Ek made it abundantly clear that Spotify is not interested in becoming a label, pointing to the underlying strategy of growing the number of artists available on Spotify. Here's a lengthy quote, but it's worth including in full as it's rather important to Spotify's long-term success.

I did want to address one thing that has been written about a lot over the past few weeks around Spotify signing direct licensing deals with artists. As we spoke about at our Investor Day, we're really building a two-sided marketplace that provides tools and services for labels and artists focused on promotion and marketing. And as a platform, we've always licensed music from rights holders both large and small, and we will continue to license music from whomever owns the rights. And we have been doing this for years because our goal is to get as much music onto the Spotify platform as we possibly can.

And licensing content does not make us a label nor do we have any interest in becoming a label. We don't own any rights and music, and we're not acting like a record label. Our agreements are specific to Spotify and are not exclusive. We want to grow the number of labels and creators on the platform as well as the number of creators using our tools and services.

In response to an analyst question about direct licensing, Ek later added that one of the biggest costs that labels incur is marketing and promotion. Spotify's tools actually help labels and artists market themselves more effectively and efficiently, giving them access to all of the tools and analytics services available on Spotify. "I think that this is a huge opportunity for all labels to become more effective," Ek said.

A "significant" investment gain on the horizon

Tencent's (OTC:TCEHY) music subsidiary, Tencent Music Entertainment (TME), is planning to go public soon, which could represent a significant windfall for Spotify since the two companies did an equity swap back in December. Spotify holds 8.5 million shares of TME, good for a 9% stake.

If and when TME goes public, Spotify will recognize a fair value adjustment to the carrying value of those shares, and the "gain would be significant." So significant, in fact, that it could allow Spotify to post positive net income in the quarter in which that event occurs. However, this would be a one-time event, and Spotify says it would return to red ink shortly thereafter.

The company just crushed its second earnings release as a public company, which is music to investors' ears.