It's Monday, and you'll no doubt be shocked to learn that Helios and Matheson Analytics (OTC:HMNY) is once again trading lower (just as it has for the last five trading days), with the stock down 40% as of 11:45 a.m. EDT.

Why is Helios down again, you ask? Well, there's no fresh news to explain the drop. My guess is that the blame today lies with the mass media, which spent most of the weekend widely publicizing the news we wrote about on Friday: that Helios ran plumb out of money on Thursday, was unable to pay theaters for all the tickets MoviePass members were buying, and had to take out an IOU to pay its bills. 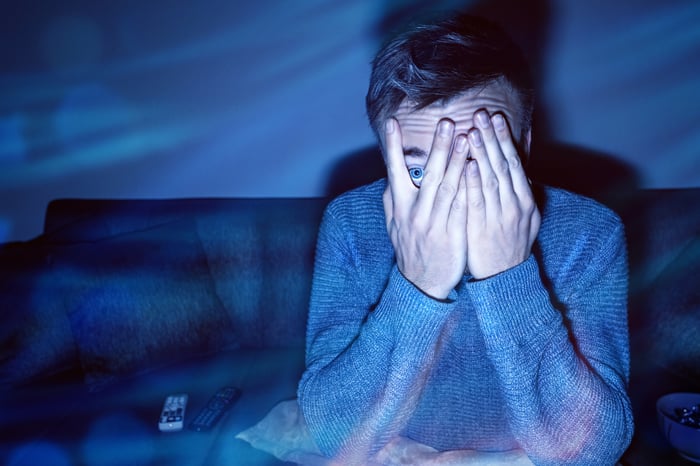 Is MoviePass a penny stock again? I can hardly bear to look and find out. Image source: Getty Images.

The promissory note that Helios secured Friday raised $6.2 million in cash to keep the MoviePass business on life support. But $1.2 million of that had to be immediately paid back to the lender. A further $3.1 million is due to be paid back later this week, and the company will probably be out of money again when the balance comes due on Aug. 5.

Thus, two scenarios present themselves: MoviePass runs out of money really quickly, and members can't use their passes again. Or MoviePass announces a big stock sale to raise cash to keep itself running -- probably as early as Tuesday or Wednesday, and in any event, before the close of the week -- and dilutes its existing shareholders down to effectively zero ownership.

No wonder the 40% drop left MoviePass stock just $0.21 away from becoming a penny stock again.