Wednesday was not a good day for Detroit automakers as they took turns reporting second-quarter results. Despite a strengthening American economy and consumers favoring more profitable vehicles, challenges continue to pop up for Ford Motor Company (NYSE:F), and its crosstown rivals.

"To have a quarter like this is striking," said James Albertine, an auto equities analyst with Consumer Edge Research, according to Automotive News. "Every time they turn over a rock, they find more problems."

With so much going on, here are three important takeaways for investors unable to keep up with all the news Wednesday.

With Ford's stock price stuck in neutral and investors demanding progress in profitability, the automaker dropped an eye-popping restructuring price tag in the second-quarter press release. A restructuring plan that will span three to five years is projected to cost Ford a whopping $11 billion in charges. Now, it must be pointed out that Ford is nowhere near as desperate as it was during the previous recession and, despite a 48% drop in net income during the second quarter, it's still solidly profitable. But analysts and investors expect more from management to protect the bottom line, and that pressure already forced the automaker to announce plans to cut $25.5 billion in costs by 2022. 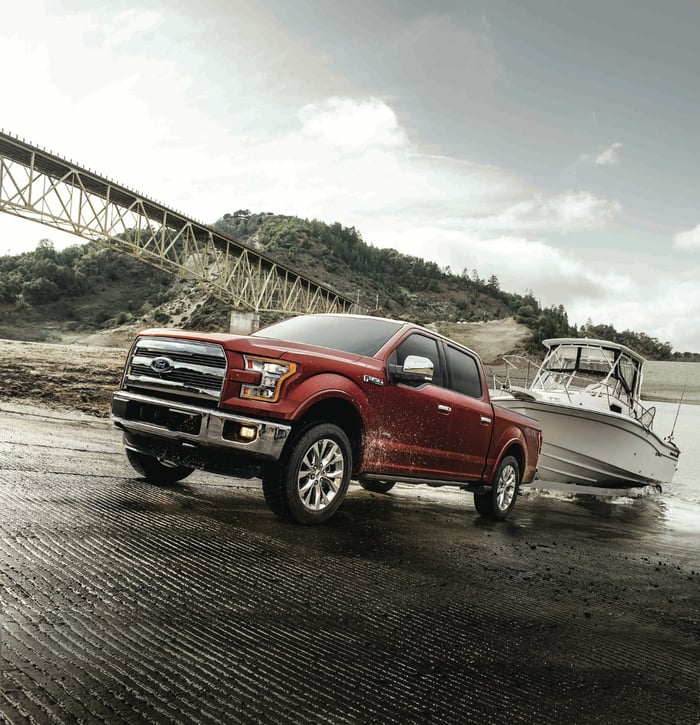 Management declined to give many details regarding the massive restructuring bill, or if it would include exiting any global markets or product lines. It makes sense for the automaker to double down on its more profitable products such as SUVs and trucks, and pull back investments in passenger cars, but that isn't as simple as snapping one's fingers. The issue is management's lack of details about the restructuring, outside of the $11 billion price tag, and that leads to the next takeaway: Wall Street is growing impatient.

One of the major takeaways for Ford investors became clear the instant the conference call went to its question & answer portion. Morgan Stanley analyst Adam Jonas was quick to throw a one-two punch. The first of two punches directed at CEO Jim Hackett, asked if he planned to be around to deliver important details during Ford's investor day – whether that's questioning Hackett's ability to keep his job, or the fact he's 63 and could retire at his leisure, is up to you. Jonas followed with a second punch directed at CFO Bob Shanks, after expressing frustration with the communication saying, "I really do hope you can reconsider the communications strategy, because it's just not good enough, Bob".

Jonas isn't the only investor or analyst frustrated with the lack of communication from Ford, although it's tough to expect the automaker to have all the answers immediately. That said, Hackett, throughout his young tenure at Ford, hasn't delivered a clear, detailed, and inspiring plan to improve the automaker's profitability, restructuring efforts and competitiveness in the driverless vehicle future. That level of uncertainty has Ford's stock price under $10 for the first time since 2012.

While Ford did take a tariff hit in the second-quarter from rising steel and aluminum prices, it cited trouble in Europe and Asia as the driving force behind its lowered guidance. Ford's adjusted earnings are now expected to range between $1.30 to $1.50 per share for the full-year, compared to the prior guidance range of $1.45 to $1.70 per share. Further, management noted it expects a "significant loss" in Asia thanks to lower pricing and an unfavorable sales mix in China, where its sales dropped a staggering 25% during the first half of 2018. To put Ford's Asia Pacific region struggles into perspective, which is largely China, look no further than the graph below, from the second-quarter. 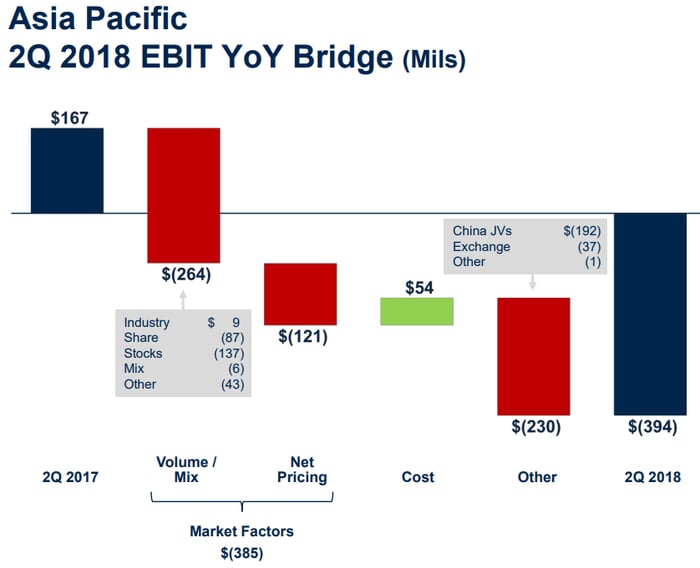 Ford's problems in China are many, including its go-to-market strategy and lower dealer profitability due to a stale product portfolio – and things may get worse before they get better. The automaker unveiled a plan to launch 50 new models in China by 2025, in hopes to grow revenue over that same time period by 50%. Management hopes that 60% of its products will be new or updated by the end of 2019. But for now, the region that was to become Ford's second pillar of revenue and profits is weighing on results.

To put it bluntly

Bob Shanks put it to reporters succinctly and accurately, "It was obviously a very tough quarter for us". Unfortunately for investors, it's going to be expensive -- although necessary -- to adapt and things in China could get worse if tariff tensions cause a consumer backlash on American goods, which is a real possibility. Patience is growing thin on Wall Street, and the automaker will need to develop a detailed and inspiring plan to turn things around, sooner rather than later.