Some investors think GE has fallen far enough. But these investments are far more likely to outperform.

Shares fell last year when new CEO John Flannery was appointed, fell further when he announced a dividend cut, and even fell again after a gloomy Q2 2018 earnings report. Shares are now down about 25% for the year...and that's on top of 2017's 44.5% price drop.

But with the company's stock price now just above a seemingly dirt-cheap $13/share, many analysts are wondering if it's time to jump back into GE to capitalize on a potential turnaround. Some have cited Flannery's tenure with the company -- especially in winning divisions and markets -- as a reason for optimism; others point out how far the stock price has fallen.

But if those are your criteria, I think you'll be better off ignoring GE and picking up shares of Apache Corporation (APA 2.88%), 3M (MMM 0.55%), or Cintas (CTAS 0.97%) instead. Here's what these three companies have that GE doesn't.

Is buying GE now a bright idea? Or will it just lead to underperformance? Image source: Getty Images.

A clear path back to growth

Another company whose share price has fallen throughout 2017 and during much of 2018 is independent oil and gas exploration and production company Apache Corporation. Like sales numbers in some of GE's industrial divisions, Apache's production numbers were falling. Unlike GE, though, Apache seems to have a very clear path to production growth.

One thing GE hasn't been able to really explain is how it will significantly grow its revenue once it sells off the divisions it's planning to dump. Slowing sales and margins in its power division are due to persistent market trends, and that outlook seems to be worsening as opposed to getting better. Even if the company's powerhouse aviation and healthcare units outperform handsomely, power is likely to be a drag on the company's bottom line.

On the other hand, Apache's primary product -- oil -- is currently enjoying high demand and big margins thanks to high energy prices. As the company ramps up production at its promising Alpine High play in the red-hot Permian Basin, Apache expects to be pumping more and more black gold through 2020. The company recently revised its production guidance upward, and at Alpine High expects a compounded annual production growth rate of more than 150% from 2017 through 2020.

Unlike GE, Apache has outlined a clear and actionable plan for growth, and as such looks like a better investment.

A man with a plan

The 56-year-old Flannery stepped into the corner office from his prior role as head of GE's healthcare division. Before that, he's held various positions within the company, including CEO and Chairman of GE India, and head of business development for GE. He's been with the company since 1987.

I think Flannery has been doing the best he can with the bad hand he's been dealt, but that doesn't change the fact that it's a bad hand. However, there's another large company with a new CEO who's in his late 50s and started with his company back in the late '80s, who -- also like Flannery -- led one of his company's major divisions, and before that, its operations in an Asian country. And that CEO has been dealt a decidedly better hand.

Meet 58-year-old Michael Roman, the new (as of July 1) CEO of materials science company 3M. Roman has worked at the company since 1988, and during his time with the company has led its industrial business group and 3M Korea. Despite the CEOs' similarities, though, the companies' performance is quite different: 3M just posted record sales and an upgraded earnings outlook in its second quarter.

Although 3M's stock has underperformed the market so far in 2018, the pullback offers an opportunity to buy a growing company that seems to be in much better shape than GE.

Rather than investing in a stagnant company on the hopes of future growth, why not invest in a company that's already growing by leaps and bounds? A company like uniform renter Cintas. A comparison of Cintas' and GE's revenue, EPS, and share prices over the last five years shows there really isn't much of a comparison: 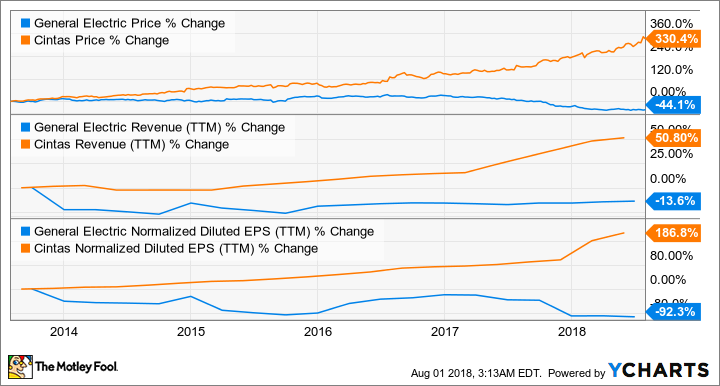 And Cintas continues to grow. In its recently completed fourth quarter of FY 2018, the company beat its guidance for both revenue and EPS. It's predicting further growth in FY 2019, and management believes the company can move up the ranks of the Fortune 500, which Cintas entered for the first time this year (it's currently sitting in the #500 slot).

Of course, nobody knows what's around the corner for any of these four companies. An unforeseen problem could cause Apache, 3M, or Cintas to underperform, just as some sort of radical turnaround, impressive acquisition or, frankly, a miracle could cause GE to outperform. And GE may indeed return to growth in 2019, but it's likely to be a long, hard slog until it gets there. And it seems more likely that GE will encounter headwinds than tailwinds on the way.

Which is why, for smart investors, Apache, 3M, and Cintas are much more sensible choices for your portfolio.