Please ensure Javascript is enabled for purposes of website accessibility
Log In Help Join The Motley Fool
Free Article Join Over 1 Million Premium Members And Get More In-Depth Stock Guidance and Research
By Rick Munarriz – Aug 3, 2018 at 9:42AM

Revenue growth finally stopped accelerating at 51job (JOBS), but it feels wrong saying that the Shanghai-based provider of online recruitment services is slowing down. 51job posted financials results after Thursday's market close, and while it's technically decelerating growth -- and its guidance calls for a continuing slowdown in top-line growth -- it's hard to knock the quarter that stands as 51job's second strongest revenue gain since 2010.

The dot-com darling's revenue rose 33% to hit a record $135.3 million for the three months ending in June. Three months ago, it was targeting just 27% to 31% top-line growth. This technically puts an end to an impressive streak of seven quarters of accelerating revenue spurts where year-over-year growth went from 10.2% at the start of the run to 33.5% in the first quarter of this year. 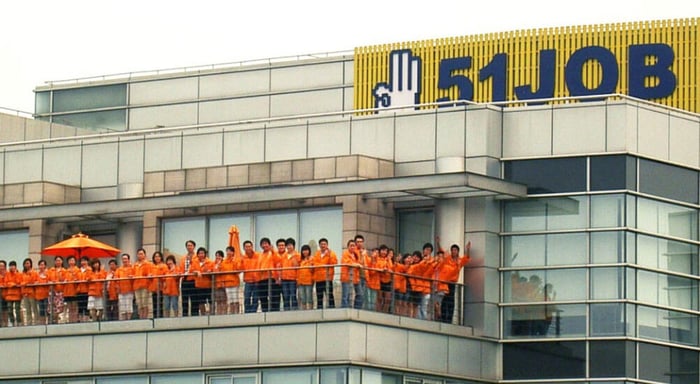 51job is exceling fairly evenly at both of its major businesses. Its 33% uptick in revenue for the second quarter is the blend of a 32.5% increase in its online recruitment services (accounting for 66% of 51job's business) and a 34% gain in other human resource related revenue (accounting for the other 34% of its top-line results).

An important point in 51job's performance is that its bread-and-butter online recruitment service was able to grow at a heady pace despite having fewer employers directly on its system. 51job closed out the second quarter with 377,831 unique employers on its platform, slightly less than the 380,717 clients assigned unique identification numbers on its system a year earlier. 51job is deliberately focusing on high-volume accounts, and it's paying off with a 33.5% spike over the past year in average revenue per unique employer.

The path down the income statement isn't as kind as it's been in previous periods. Gross and operating margins actually contracted this time around as a few line items outpaced its revenue growth. 51job reversed its profit a year earlier to report a net loss this time around, but that was the handiwork of one-time items in which currency translations and an accounting hit more than offset a large increase in local government financial subsidies. Adjusted earnings soared 72% to $0.82 a share -- well ahead of its earlier growth target -- but it may not be a fair comparison since that tweaked profit figure includes the spike in local government subsidies.

The new quarter is expected to show more modest growth. 51job is forecasting an adjusted profit of $0.56 to $0.60 a share on $136.8 million to US$141.3 million in revenue for the second quarter. In short, 51job is targeting 26% to 30% growth in Chinese currency. The dollar-based translation of that growth is lower given the way that the greenback has appreciated against the yuan in recent months -- something that is important in sizing up 51job's outlook against market expectations -- but there's comfort in knowing that 51job's growth is only decelerating slightly within China. Investors should also appreciate that 51job has been historically conservative with its guidance. Once again, 51job is getting the job done.