There's already been a lot written about the company's third-quarter raw numbers, but let's take a closer look at what Apple's leadership shed light on during the company's earnings call. Apple CEO Tim Cook highlighted a handful of areas where the company is outperforming, so let's see what he had to say. 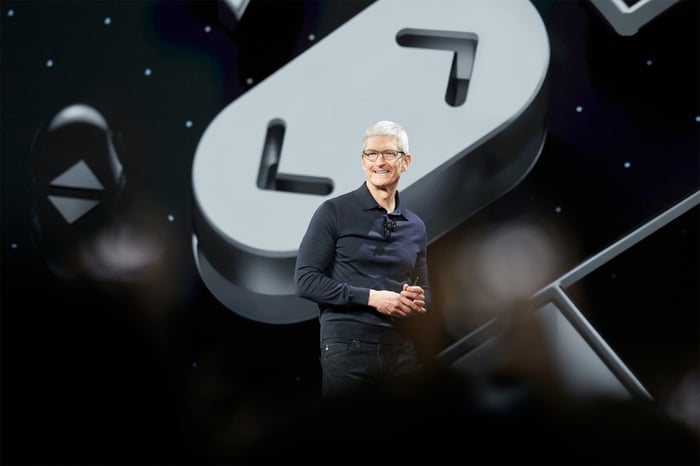 Cook kicked off his comments on the earnings call by saying that Apple's best-ever June quarter sales and earnings were "thanks to the strong performance" of iPhone, services, and wearables.

It's no secret that the company's services segment (which includes the App Store, Apple Pay, Apple Music, AppleCare, etc.) has become increasingly important to the company. Services sales jumped 31% year over year to $9.5 billion in the third quarter and are closing in on Cook's goal. "We feel great about the momentum of our services business, and we're on target to reach our goal of doubling our fiscal 2016 services revenue by 2020," Cook said.

He added that services growth was fueled by paid subscriptions, which are up more than 60% over the past year and have now surpassed 300 million. Cook also shed some light on the fact that subscriptions are becoming a very important part of the overall services segment, saying, "Revenue from subscriptions accounts for a significant and increasing percentage of our overall services business."

Investors should know that the services revenue in the quarter included a favorable one-time item of $236 million, which was the result of resolutions from various lawsuits. But even when this item was excluded, services revenue still hit an all-time record and grew by 28% year over year.

Cook also took some time to point out Apple Pay's growth as well. He mentioned that the service had "well over" 1 billion transactions in the quarter, which was triple the amount from the year-ago quarter. "To put that tremendous growth into perspective, this past quarter we completed more total transactions than great companies like Square and more mobile transactions than PayPal," Cook said.

2. iPhone selling prices are higher than ever

The iPhone is still the lifeblood of Apple's business, of course, and third-quarter iPhone revenue didn't disappoint. The company brought in 20% more revenue from the device family compared to the year-ago quarter, even though iPhone unit sales themselves were flat.

The increase in revenue came from Apple's ability to increase the average selling prices (ASPs) for iPhones, mainly because of the starting price tag of $999 for the iPhone X. Luca Maestri, Apple's chief financial officer, said on the earnings call, "iPhone revenue grew 20% year over year with iPhone ASP increasing to $724 from $606 a year ago driven by the strong performance of iPhone X, iPhone 8, iPhone 8 Plus across the world."

ASP jumping from $606 to $724 is quite a leap, and Cook shed some light on why Apple was able to command more money for its latest flagship device: "And so if you look at iPhone X in particular, it's the most innovative smartphone on the market. We priced it at a level that represented the value of it. And we could not be happier that it has been the top selling iPhone since the launch."

One analyst noted on the call that typical iPhone ASP growth is up 2% to 4% sequentially and asked what investors might be able to expect in the fourth quarter. In response, Maestri said, "On iPhone ASP, the only thing that I will point out is that obviously, we're exiting the June quarter at a significantly higher level than in the past and so that I think is important to keep in mind as we move into the September quarter."

That response sounds a bit like a non-answer, but investors should know that for ASPs to continue climbing at the rate they did in the third quarter, Apple would likely have to continue releasing higher-priced phones.

3. Don't panic about tariffs just yet

Finally, Tim Cook took some time to address what's been on many Apple investors' minds for a while now: the escalating trade war with China and its potential effect on Apple's business. The latest news is that the Trump administration may place a 25% tariff on $200 billion worth of goods imported from China.

China is a significant market for Apple, and Cook addressed a question about trade, saying that the first few rounds of tariffs haven't affected the company's products yet, but that he's watching the next round closely. "There is a fourth tariff which includes goods valued at $200 billion, also focused on goods that are imported from China -- that one is out for public comment, probably like everyone else we're evaluating that one and we'll be sharing our views of it with the administration and so forth before the comet period for that one is."

After saying that tariffs and their impact on macroeconomics are complex, Cook added that he's taking an optimistic view. "All of this said we're optimistic, as I've been the whole time that this will get sorted out. Because there's an inescapable mutuality between the U.S. and China that sort of serves as a magnet to bring both countries together. Each country can only prosper if the other does. And of course, the world needs both the U.S. and China to prosper for the world to do well. With that said, I can't predict the future, but I am optimistic that the countries will get through this. And we are hoping that calm heads prevail."

With Apple's fantastic third-quarter results, average selling prices for the iPhone higher than ever, and services revenue closing in on the company's goal, it's no wonder Cook is staying optimistic.