Apple (NASDAQ:AAPL) stock has soared recently, rising about 9% since the tech giant's expectation-crushing third-quarter results were released on July 31, and 22% year to date. This is great for shareholders. But does it mean investors who were considering buying but never pulled the trigger have missed out? Similarly, does the stock's pricier valuation mean shareholders should stop adding to their positions?

Despite the stock's sharp run-up, shares remain attractive. Not only does Apple stock look conservatively priced, but strong momentum across the company's business points to a bright future for the tech giant. 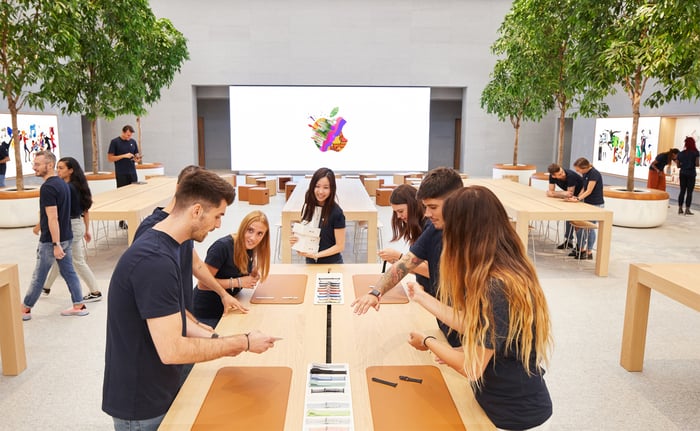 In three charts, here's why Apple stock continues to look like a compelling buy around $210.

First and foremost is Apple's accelerating revenue growth. Since returning to growth in the first quarter of fiscal 2017, Apple has not only delivered year-over-year growth in every subsequent quarter -- but the pace of growth has accelerated each and every period. 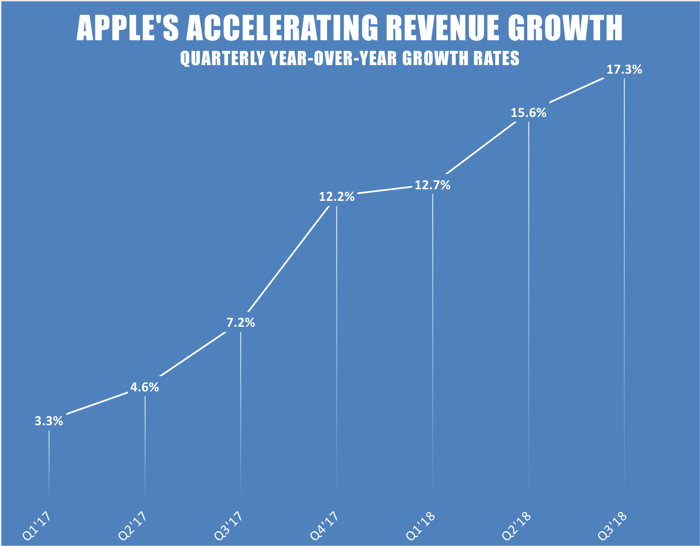 Thanks to fiscal third-quarter revenue that came in at the high end of management's guidance range, Apple's revenue for the period increased 17% year over year. This was up from about 16% year-over-year growth in the prior quarter, and extended Apple's streak of accelerating revenue growth to six consecutive quarters. It's remarkable that the tech giant is able to grow its top line, even as it brings in over $250 billion in annual revenue.

And it's encouraging that fueling this momentum is strong growth in every one of Apple's business segments -- it shows the company is executing well across its business.

Apple's slowest-growing segment during the past 12 months, Mac, registered 3% year-over-year revenue growth. But even this segment's performance was impressive: Apple's active installed base of Macs hit an all-time high in the company's most recent quarter.

Then there's Apple's iPhone segment, which has notably seen a resurgence in revenue growth thanks to higher average selling prices. iPhone products account for over half of Apple's revenue, and a 13% trailing-12-month revenue growth here points to the important product lineup's health.

But even if Apple's core iPhone segment loses its luster in the coming years, the tech giant has two hot segments ready to pick up any slack from maturing product lines and are thus poised to drive meaningful growth over the long haul.

One of these segments is services, or revenue from digital content and services like the App Store, iTunes Store, iCloud, AppleCare, and Apple Pay. The other is Apple's Other Products segment, which includes revenue from Apple TV, Apple Watch, Beats products, iPod touch, and other Apple-branded and third-party accessories. 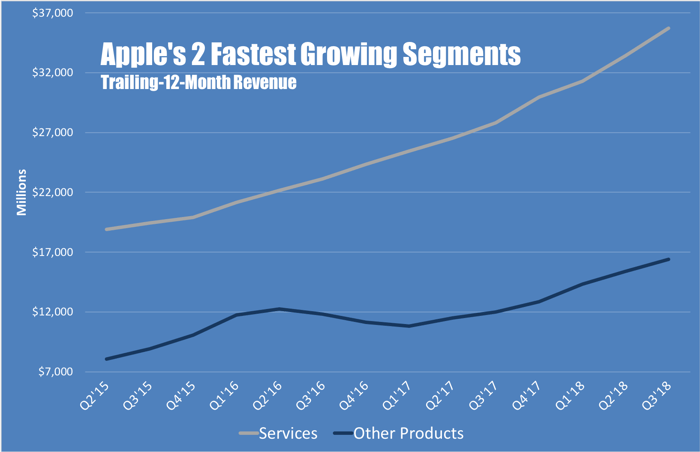 Both of these segments are growing at impressive rates. In Apple's just-reported third quarter, services revenue was up 31% year over year, while Other Products revenue increased 37%.

Defined as cash flow from operations minus capital expenditures, free cash flow is the cold, hard cash management has left over after it has taken care of its regular business activities and made investments in its future. Apple has loads of it, supporting the company's enormous share-repurchase program and fast-growing dividend.

Having raked in nearly $59 billion in free cash flow over the trailing 12 months, Apple is undeniably a cash cow. Its heady free cash flow is evidence that Apple's trillion-dollar valuation doesn't rest solely on investor exuberance. In fact, based on how Apple's price-to-free cash flow metric compares to those of Alphabet and Microsoft, it appears its smaller (but still massive) peers are the Wall Street darlings -- not Apple. 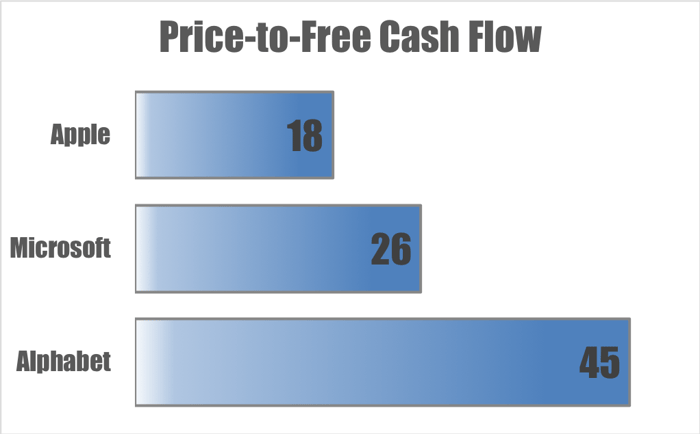 The combination of solid free cash flow, accelerating top-line growth, and an aggressive share-repurchase program easily supports a $1 trillion valuation. Sure, the company will need to continue executing well, but a valuation this conservative leaves plenty of room for occasional headwinds and even a decelerating growth rate over the long haul.

Fortunately, though, the health of Apple's iPhone business and the strong momentum the company is seeing from services and other products show healthy growth is still likely going to be the norm for a while longer.

No, Apple isn't the bargain of years past. But it's still an attractive stock at around $210.