Ad dollars follow eyeballs, and real estate agents have been willing to pay up to advertise on Zillow's platform. Premier Agent revenue jumped 22% to $230.9 million in the second quarter.

Zillow also began reporting results for its new homes segment, which includes its Zillow Offers home-flipping business. It generated a pre-tax loss of $12.2 million in the second quarter, as Zillow began buying houses directly from homeowners in Phoenix and Las Vegas.

CEO Spencer Rascoff commented on the early success of this new business line in prepared remarks:

Zillow Offers empowers sellers to receive a cash offer directly from Zillow. So far, the launch has gone extremely well. Almost every aspect of Zillow Offers -- from seller demand, to managing renovations, to promptly reselling the houses we own -- is going according to, or better than, plan. We are encouraged by the quantity of seller demand for a Zillow Offer, which has exceeded our expectations. Since launch, we have received more than 10,000 offer requests from potential sellers, representing an estimated $2.8 billion of real estate.

Yet despite these strong early results, Rascoff noted that home sellers are taking longer than anticipated to close after they accept an offer from Zillow. As such, Zillow scaled back its forecast of homes in its inventory for resale at year's end from between 300 and 1,000 to between 300 and 550. The company also lowered its full-year homes segment revenue guidance to $20 million to $40 million, down from $125 million to $255 million. 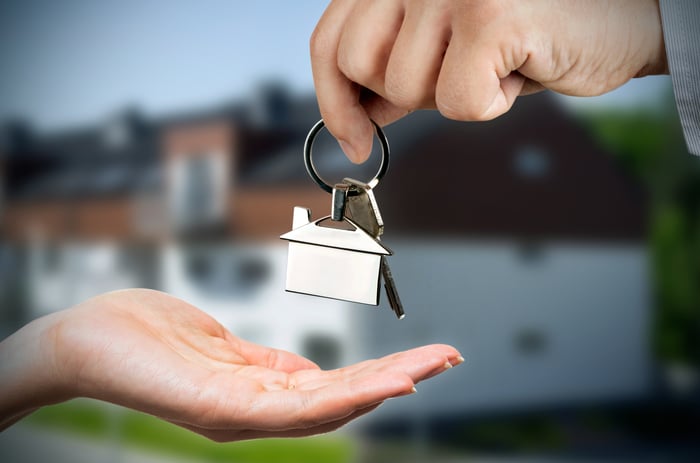 For the third quarter, Zillow expects total revenue of $337 million to $347 million and adjusted EBITDA of $65 million to $73 million.

Zillow also announced that it reached an agreement to acquire Mortgage Lenders of America, as part of its goal to simplify the process of buying homes through Zillow Offers.

"Getting a mortgage can be the toughest, most painstaking and time-consuming part of the home-buying process," Zillow Group President Greg Schwartz said. "Now that we are buying and selling homes through Zillow Offers, we believe that having our own mortgage origination service as an option for consumers will allow us to streamline the process for people who buy a Zillow-owned home."