The biotech company racked up a trio of clinical hits last month, sparking a double-digit rally in its shares.

After a prolonged losing streak, Celgene Corporation's (CELG) stock rebounded quite nicely last month by gaining 13.4%, according to data from S&P Global Market Intelligence. What sparked this rally?

Celgene's shares perked up in response to three positive late-stage trial readouts in July. Specifically, the company reported that its experimental anemia medicine luspatercept -- that's licensed from Acceleron Pharma -- struck gold in two late-stage trials for both myelodysplastic syndromes and beta-thalassemia early in the month. 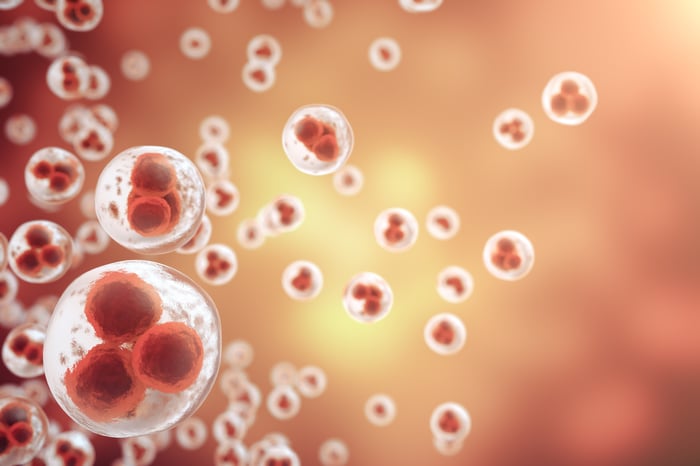 Towards the end of the month, Celgene also announced that its flagship drug Revlimid successfully met its primary endpoint in a late-stage trial when used in combination with rituximab as a treatment for relapsed/refractory follicular and marginal zone lymphoma.

Celgene's stock has been in a tailspin over concerns that the company won't be able to keep growing once Revlimid loses exclusivity in the coming decade. The biotech, after all, bumbled the regulatory filing for the blockbuster-in-waiting ozanimod earlier this year. The autoimmune disease candidate ozanimod is widely viewed as Celgene's next flagship medicine, thanks to its peak sales potential of between $4 billion to $6 billion.

This regulatory delay, however, might negatively impact the drug's commercial opportunity by enabling would-be competitors to close the gap from a developmental standpoint. So, Celgene's ability to bring other high-value clinical candidates along in rapid fashion is certainly welcome news for the company's shareholders.

Celgene plans on filing for luspatercept's regulatory approval in the first half of 2019. That's key because several experimental medicines and therapies are not far behind this drug for both of its proposed indications. Put simply, the drug's $2 billion peak sales estimate could evaporate fairly quickly if it can't maintain its first-mover advantage over a field of would-be competitors. That said, Celgene's all-important clinical program does appear to be back on track and that fact should bode well for shareholders going forward.