The company's long-running campaign to broaden its plane business gets a boost, but don't pop those champagne corks yet.

Textron's (TXT 3.19%) hope to broaden its aviation business's military chops got a boost when the company's AT-6 Wolverine was named a finalist in the Air Force's light attack aircraft competition. But the Wolverine, as well as the very concept of today's Pentagon buying a propeller-based attack plane, remains a far-from-certain proposition.

The Air Force on Aug. 3 posted notice of plans to acquire a fleet of light attack planes beginning in late 2019, with a formal request for proposal expected in December. The notice said that only the AT-6 and the A-29, a rival made by Embraer (ERJ 1.90%) and Sierra Nevada, will be considered. 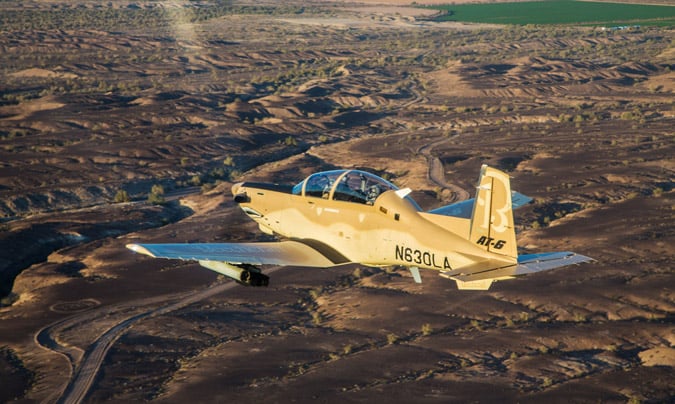 The notice does not say how many planes would be acquired, though some lawmakers have envisioned a fleet of about 300. With an expected unit price of about $20 million, a full order could be worth $6 billion.

The potential deal would be a shot in the arm for Textron, which via its ownership of both Cessna and Beechcraft is a major force in commercial and recreational aviation but has ambitions to expand its military might. Should the Wolverine prevail, the win would almost certainly make the plane an easier sell overseas and could boost the fortunes of Textron's Scorpion low-cost jet fighter program as well.

Do we need props in the jet age?

Even as it spends billions on high-tech jets like the F-35 Joint Strike Fighter and F-22 Raptor, the Air Force has remained intrigued by propeller aircraft, which, thanks to their slower speed, better fuel economy, and maneuverability, can hover over battlefields and provide close-in support. During the Vietnam War, the A-1E Skyraider was a mainstay, though the aircraft's high loss rate highlights the obvious downside of those slower speeds and low-altitude flying.

The modern version would have similar vulnerabilities, but its boosters envision it facing off not against modern anti-aircraft guns but instead as useful against terrorists and insurgents who are primarily relying on AK-47 rifles and other small arms. The light attack aircraft would also cost just a fraction of what a modern fighter does, both to acquire and to operate, and is seen as an affordable way for the United States and its allies to rapidly expand their aerial presence.

That idea still has a lot of skeptics, and Air Force spokeswoman Ann Stefanek told Defense News that despite the notice, the military has not yet made a final decision on whether to move ahead with the program. While the plane could be effective and relatively safe against counterinsurgents, critics argue that this is a very narrow use case that can also be addressed via Apache attack helicopters and existing planes such as the A-10 Warthog.

And with military technology quickly advancing and more sophisticated systems finding their way to an ever-larger number of combatants, it seems likely that even if insurgent groups today cannot easily best a light attack aircraft, the future risk to pilots would be substantial.

Assuming the Air Force does commit to buying the plane, the Wolverine is in for a fight. Though the A-29 suffered a crash with loss of life during a planned three-month Air Force flight-testing period earlier this year, it has been in service for more than a decade and is currently operated by nearly a dozen countries. The plane has fought drug smugglers for Brazil and FARC for Colombia and has done airstrike sorties for Afghanistan.

Not only is the A-29 far more battle tested, its multiple deployments mean there is a ready-made ecosystem built up around it and some precision U.S.-made weaponry, including laser-guided bombs, that is integrated to work with it. And while Embraer is already partnered with Sierra Nevada to sell the plane in the United States, the Brazilian company's recently announced commercial tie-up with Boeing also contemplates the two companies working together on defense, which means the A-29 might soon have a powerful new ally.

The Wolverine might not have combat experience, but the Beechcraft T-6 on which it is based is the primary trainer for the U.S. Navy and has more than 800 frames in use by the Pentagon as well as by NATO allies and elsewhere. It's a plane that the Air Force is very familiar with; it has hundreds of thousands of hours of flight time to prove its reliability and a reputation for durability.

Textron has added advanced armor to that design and an automated missile detection and countermeasure system to try to increase survivability, though the A-29 has similar measures.

Textron is a winner either way

As of now, I'd assume the A-29 is a slight favorite should the Air Force proceed to buy a propeller-powered attack aircraft, thanks to its international success. The Embraer offering came out on top the only previous time the two designs have battled, a 2012 deal with the Afghan Air Force, though that was before Beechcraft and the Wolverine were owned by the deep pockets of Textron.

Fortunately for Textron, the company has a lot going for it beyond its fledgling military platform business. The company's second quarter included strong results from its industrial operations and reason for optimism that the extended slump in business jets might finally be easing.

With new commercial bizjet models coming online over the next two years and the potential for increased demand at its Bell helicopter unit thanks to a rebound in energy prices, I think Textron is well positioned to outperform competitors even without a Wolverine win.

Think of Textron as a strong industrial conglomerate with a side bet on military aircraft. Buy it for those businesses, and celebrate the added upside should the Air Force decision go its way.