It's still early days for Fitbit (NYSE:FIT) in smartwatches, but there's no denying that the company has been pulling the right strings to make a name for itself in the space. The wearables specialist has made a solid transition from selling fitness trackers to smartwatches in a very short time.

Its first smartwatch, the Ionic, was launched last September, and now Fitbit is getting 55% of its total revenue from this device category thanks to the addition of a more pocket-friendly Versa smartwatch. In fact, Fitbit management claims that the Versa's North American sales eclipsed the combined sales of Samsung, Fossil, and Garmin's smartwatches.

This indicates that Fitbit is trying to position itself as a viable Apple Watch alternative, which, in my opinion, is a smart thing to do, as it could win big from the smartwatch market even if it ends up playing second fiddle to Cupertino. 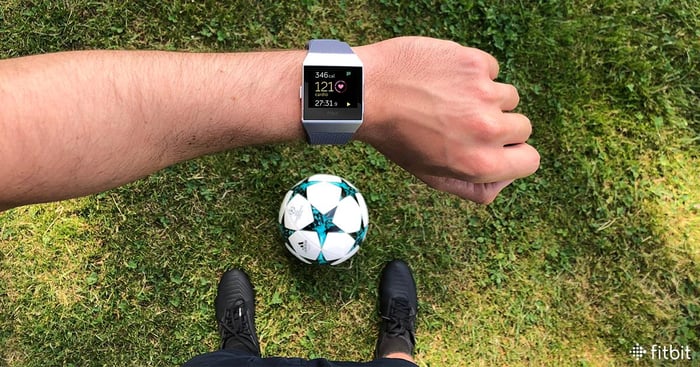 Playing to the base

Fitbit has established a massive user base thanks to its first-mover advantage in fitness trackers. The company had more than 50 million registered users at the end of 2016 before it stopped reporting this metric. At that time, 23.2 million users, or 46% of Fitbit's registered user base, were actively using its devices.

However, active user growth eventually slowed down in 2017 as Fitbit's device sales fell more than 31%. Not surprisingly, the company decided that it's best to stop reporting the registered user metric, which tracks those users who have either used a Fitbit device or subscribed to one of its services even once. Meanwhile, active users are those who have used a Fitbit device at least once in the past 90 days.

But what we do know is that Fitbit has a bank of at least 50 million registered users, and around half of them weren't using its devices as fitness trackers started going out of fashion. The trend, however, is changing thanks to Fitbit's transition into smartwatches. As it turns out, 40% of Fitbit's new device activations came from repeat buyers during the second quarter, and 51% of these repeat buyers were inactive for more than 90 days.

By comparison, 39% of Fitbit's repeat buyers were inactive for more than 90 days in the prior-year period when it had no smartwatches to offer. So it's clear that the two new smartwatches -- priced at different levels to appeal to a wider audience -- are helping the company bring old customers back into its fold while also bringing new ones into the ecosystem.

Fitbit is just getting started

Fitbit didn't spell out exactly how many smartwatches it sold last quarter, but it did state that it got just over half of its revenue from this category. This puts Fitbit's smartwatch revenue at $165 million for the quarter, representing an annualized revenue run rate of $660 million. Fitbit currently has two smartwatches on the market, one priced at $200 and the other one at $249.

The cheaper Versa smartwatch is the hot seller of the two. For simplicity's sake, if we assume Fitbit generates $200 from every smartwatch sale (which does not reflect the lower price paid by distributors), the company would have sold an estimated 825,000 smartwatches last quarter. At this rate, the company could end up selling an estimated 3.3 million smartwatches this year.

Assuming that IDC's forecast for smartwatch sales this year also holds true, Fitbit would end up grabbing around 8% of the smartwatch market in 2018. That's a good start given that 2018 will be its first full year of selling smartwatches. More importantly, Fitbit can go on to carve a bigger share of the pie for itself thanks to its existing user base and the launch of additional services to keep users hooked.

For instance, the company recently launched a dedicated feature for tracking the health of women, which received a warm response with 2.9 million sign-ups. Additionally, its Fitbit Coach subscription is reasonably priced, as users can get access to a variety of bodyweight workouts for just $40 a year.

At that average smartwatch price of $200, the company would easily pull in more than $2.5 billion a year from smartwatch sales, which will be a massive jump over the current annualized run rate. But remember that these are rough estimates. The key thing for investors to track is how well Fitbit can win over new and inactive users, just as it has already begun to do.