Please ensure Javascript is enabled for purposes of website accessibility
Log In Help Join The Motley Fool
Free Article Join Over 1 Million Premium Members And Get More In-Depth Stock Guidance and Research
By Harsh Chauhan - Aug 17, 2018 at 6:20AM

Losing this source of demand will knock the wind out of the company's sails.

Advanced Micro Devices (AMD -4.11%) crushed the best of Wall Street's expectations during the second quarter, thanks to strong demand for its Ryzen PC CPUs and EPYC server CPUs. However, the doubts about whether it can sustain its terrific momentum once certain tailwinds fizzle out should raise doubts in investors' minds given the company's outlook.

AMD revenue is expected to grow less than 4% year over year during the current quarter. By comparison, AMD's top line jumped 26% annually during the same period last year. This slowdown isn't surprising, as cryptocurrency mining is now moving to dedicated chips rather than GPUs. In fact, AMD got just 6% of its revenue from sales of GPUs (graphics processing units) to cryptocurrency miners last quarter as compared to 10% during the first. That should worry shareholders as AMD was the biggest beneficiary of mining-driven demand. 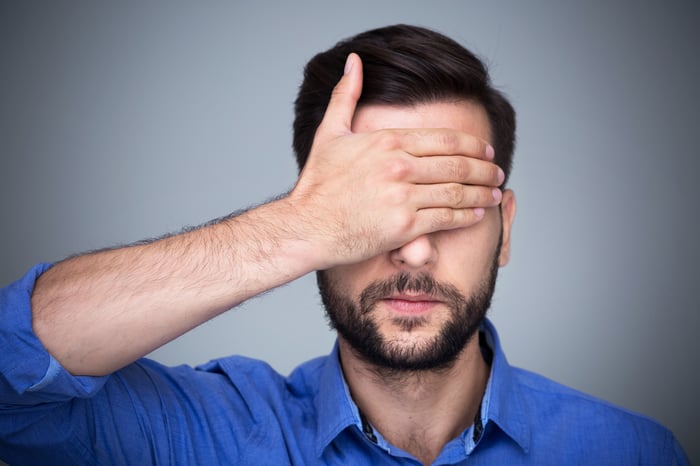 Low GPU prices are knocking the wind out of AMD

Investors were quick to praise AMD's latest results and the success of its new products, but they seem to be missing the fact that the company still gets a major portion of its revenue by selling GPUs. The company's computing and graphics business supplies nearly 62%, or $1.09 billion, of the top line, and it counts Ryzen CPUs and Radeon GPUs as its primary growth drivers.

The Ryzen CPUs, however, aren't playing that big a part in the grand scheme of things right now. They helped the chipmaker boost its CPU market share from 8% to 12% at the end of 2017, according to Mercury Research -- not a huge gain.

AMD reportedly sold an additional two million processors last year. Now, AMD's Ryzen CPUs are priced from $109 at the lowest to $999. The median pricing of AMD's CPUs was $234 in 2017, so the Ryzen CPUs possibly helped it bring in an additional $450 million of revenue (assuming the two million units were all Ryzen). By comparison, the company's computing and graphics revenue had increased over $1 billion last fiscal year.

With that in mind, it's likely that inflated GPU prices have been critical to the company's growth over the past year, as they probably did most of the heavy lifting to boost the computing and graphics business. A look at the following chart will make it clear why that was the case. 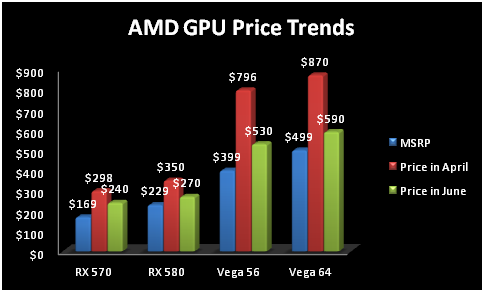 So cryptocurrency's impact on AMD was more than just the GPUs that it was selling to crypto miners, as the supply shortage caused by mining demand led to a massive price bump. This allowed AMD to generate strong GPU sales to video game enthusiasts as well, but as the chart and AMD's guidance show, that won't be the case going forward.

The GPU supply shortage is ending

There are several reasons GPU prices have started normalizing of late. First, sliding cryptocurrency pricing means that the profitability of miners has taken a hit. As such, miners who bought GPUs at extremely high prices are now being forced to sell them at lower prices to recoup some of their investment. This is increasing end-market supply, as gaming enthusiasts can get their hands on a decent GPU at a low price.

Additionally, the emergence of specialized cryptocurrency mining chips has led miners to shift their allegiance elsewhere, as the dedicated chips are more efficient. Meanwhile, fresh GPU supply is expected to come into the market, as AMD's rival, NVIDIA, is expected to launch its next-generation graphics cards this fall. The company is said to be building a million units of its new GPUs so that it doesn't run out of supply post-launch.

Not surprisingly, DigiTimes estimates that GPU prices fell another 20% in July, and the downward pressure will continue as new supply hits the market. In turn, AMD's revenue growth is expected to fall sharply going forward, with analysts forecasting top-line growth of just 8.5% in the next fiscal year.

That'll also hit the company's bottom line in a big way, which is why it doesn't make sense to buy AMD at its current valuation. The stock is too expensive trading at over 40x forward earnings, and without cryptocurrency juicing the results, AMD might be in for a period of tepid growth until its next major catalyst takes hold.