The Saudi fund that was thought to be backing Tesla's bid seems to be shopping around.

Saudi Arabia's sovereign wealth fund is seriously considering an investment in electric-luxury-car start-up Lucid Motors, according to a Reuters report.

That's significant for a few reasons, starting with this one: Tesla (TSLA 3.76%) CEO Elon Musk has been looking to the Saudi fund for financial support in his effort to take Tesla private.

Is the fund's interest in Lucid a sign that it's edging away from a deal with Tesla? Let's take a closer look.

Who is Lucid Motors?

If you haven't heard of Lucid Motors, here's a quick summary:

Lucid, based in Menlo Park, California, is a serious electric-vehicle start-up backed by investors from the U.S., Japan, and China. The company's chief technology officer, Peter Rawlinson, is a well-regarded industry veteran who was chief engineer on Tesla's groundbreaking Model S sedan. 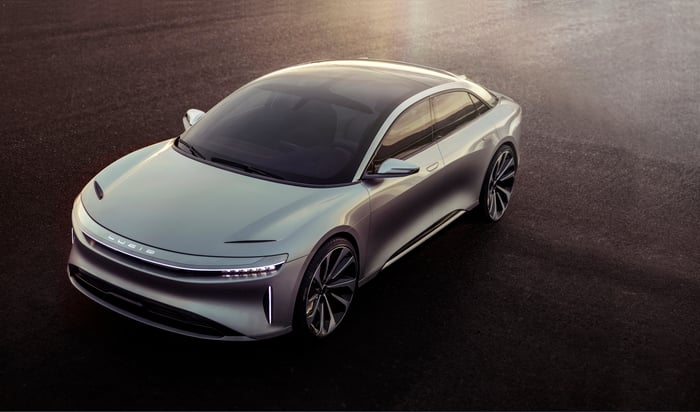 The Lucid Air is a luxurious high-performance electric sedan with impressive technical specs. Lucid hopes to put it into production in 2019. Image source: Lucid Motors.

Rawlinson and his team of industry veterans are aiming to put their first vehicle, a high-performance electric luxury sedan called the Air, into production next year, in a factory currently under construction in Arizona. Lucid expects to make 10,000 Airs in the first 12 months of production, and hopes to ramp up to 60,000 cars per year by 2022.

Your humble Fool spent some time with Rawlinson and a few other Lucid executives last year. I came away impressed: These folks know what they're doing. Simply put, Lucid has a credible team, a car that looks likely to sell, and a factory under construction. The one thing it may be lacking is the funding to fully deliver on its plan.

That may be where the Saudi fund comes in.

The Saudi fund and its potential deal with Lucid

Saudi Arabia's sovereign wealth fund, called the Public Investment Fund (PIF), is a $250 billion fund that has made a number of significant investments in technology companies -- including a stake in Tesla that is reportedly close to 5%.

According to Reuters, the deal under discussion with Lucid involves an investment of over $1 billion that would be made in several stages as the company hits a series of production milestones. The initial investment would be $500 million, and PIF would have a majority stake in Lucid once all of the stages are completed.

The negotiations between Lucid and PIF are apparently fairly advanced: Reuters reports that the parties have drawn up a term sheet.

Isn't the Saudi fund planning to invest in Tesla?

Well, as far as we know, the PIF and Tesla haven't drawn up a term sheet -- or even come close. Over the last week, it has become clear that Musk's Aug. 7 tweet claiming that he had "funding secured" for a deal to take Tesla private was, shall we say, overly optimistic -- at best.

It seems that PIF's managers had shown some interest in a Tesla deal, and Musk may have taken that interest to mean that a deal could be completed. But it appears that Tesla's board of directors was taken by surprise by Musk's tweet, and the company now appears to be in damage-control mode.

What does the fund want?

Despite the PIF's $250 billion size, the sum required for a deal to take Tesla private (likely at least $20 billion, possibly more than $50 billion) might be a daunting one for the fund, as it has reportedly already committed to several major deals.

The fund's goal may be to secure a significant stake in an electric-vehicle business to help the Kingdom of Saudi Arabia diversify away from its reliance on oil revenues. If so, Lucid is a bargain compared to Tesla. While Lucid doesn't have Tesla's huge volume ambitions, what it does have is a credible plan to become a niche provider of luxury electric vehicles -- and a team that stands a good chance of delivering on that plan, given sufficient funding. Lucid is also still an early stage business. If it were to jump in now, PIF would have a chance to help shape key decisions about the company's supply chain, manufacturing, product line, and so forth.

Tesla is much bigger, of course, and much closer to being a high-volume automaker. But Tesla comes with a lot of baggage, including billions in debt -- and a superstar CEO who is probably in over his head, but who may be very difficult to replace.

What does it all mean for Tesla?

There's nothing precluding the PIF from investing in both Lucid and Tesla, of course. But if nothing else, the reported status of its negotiations with Lucid (that term sheet) shows us that the fund is likely nowhere near ready to commit funds to help Tesla go private.

And since PIF is the only investor that is known to have shown interest in Tesla's go-private deal and that (probably) has sufficient capital to comfortably make the required investment, that calls the whole effort to take Tesla private at $420 per share (or any other price) into question.

Long story short: The pressure on Tesla just went up a notch.