Esports gets headlines, but mobile is where the money is.

It's easy to say that esports is the most important growth market for Activision Blizzard (ATVI -0.23%) given the popularity of esports and hundreds of millions in revenue flowing in from advertisers. I've pushed esports as an critical area for the company, and fellow Fools have done the same, but we may be missing a more important opportunity.

During the 2018 second-quarter conference call, "esports" was mentioned 15 times, while "mobile" was mentioned 23 times. Management may be telling us that the real growth story for Activision Blizzard is in our pockets. 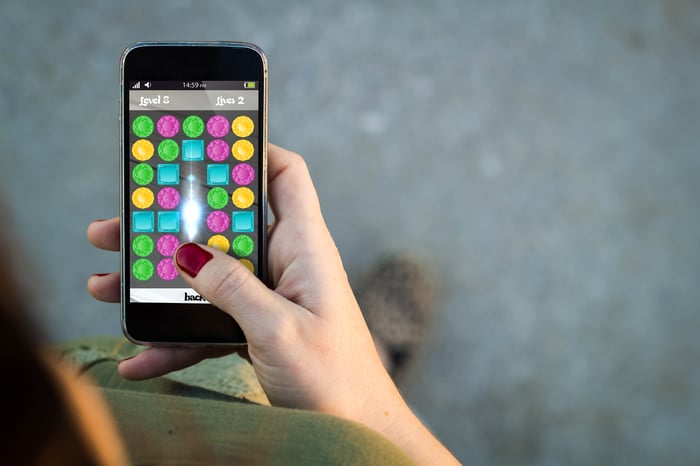 You don't have to dig too deep into the conference call to tell what CEO Robert Kotick sees as Activision Blizzard's best growth opportunity. He said this early in the call: "We're also making important progress across all our mobile initiatives, which will increase the reach of our games significantly." He went on to point out the scale difference between esports and mobile:

While esports give our existing fans a new and everlasting way to celebrate their favorite games and expands the appeal to broader audiences, our mobile initiatives will expand our access to our iconic franchises by making them available to hundreds of millions of new players around the world. We have multiple mobile initiatives under way, including some with partners with strong mobile experience and local market knowledge ... Today's Call of Duty mobile game announcement with Tencent is part of our effort to ensure our very best franchises are available to mobile audiences in all geographies.

To put the scale of mobile into perspective, Statista estimates that there are 4.6 billion mobile phone users worldwide compared to around 103 million Sony PS4 and Microsoft Xbox One consoles sold. No matter how you look at it, mobile is a much bigger opportunity if Activision Blizzard can get games right.

It isn't that esports isn't a focus for Activision Blizzard, it's that mobile is an even bigger focus for its financial future. Chief Operating Officer Collister Johnson said this to reinforce that point:

I would want to say that, for us, the bigger unlock over the near term is to broaden the global reach of our franchises through mobile. And as you've heard, we think it's a large opportunity. We have really deeply engaged communities who are really looking for experiences to have with them throughout the day. And when you look at our incubation pipeline, or when we look at it, we get really excited about what that future can bring. And we're -- as you heard in today's call, we're focused on expanding that area of our business, and we're really excited to take next steps over the coming quarters.

Management has given every indication that in the very near future, we should see the financial impact of mobile initiatives. The Call of Duty launch with Tencent and a product launch from King are the known commodities in mobile from Activision Blizzard. Given the number of people already using the company's mobile products, it's not surprising mobile is seen as an even bigger opportunity than esports for Activision Blizzard's management.

Mobile will make esports even bigger

The mobile initiative won't just be existing games like Call of Duty being ported into mobile, either. King Digital is a key component, with Johnson saying, "We also expect to progress on our other mobile initiatives in the second half of the year, including a major new launch from one of King's established franchises." It's clear that mobile is a bigger opportunity than we may be giving it credit for, and Activision Blizzard's management definitely sees it as an even bigger opportunity than esports are today.