Dividend investors are often lured by high yields, but more often than not, you'd be better off owning dividend stocks that can earn enough to back those yields, especially at a time when they may have lost favor with the market. In-the-know investors know this well and are always on the lookout for companies that are laying out plans to return a greater portion of money to shareholders, even if that means taking a bit of risk.

A risk-reward dividend investment worth considering

Jason Hall (Newell Brands): It's been an ugly couple of years for Newell Brands investors. In 2015, the company acquired Jarden, and about the best way to describe that move was value-destroying. Since the deal closed in April 2016, Newell's stock price has fallen by 49%. Taken from the peak a few months post-closing, investors have lost almost 59%.

To sum it up, it has been nearly a textbook case of a major acquisition gone wrong: failure to gain the benefit of "synergies" promised by management, loss of market share and declining sales from the combined business, and the inevitable infighting of executives and even the board as leaders clash over how to turn things around.

Sometimes that creates opportunity, even with the risk. I think that might be the case with Newell. 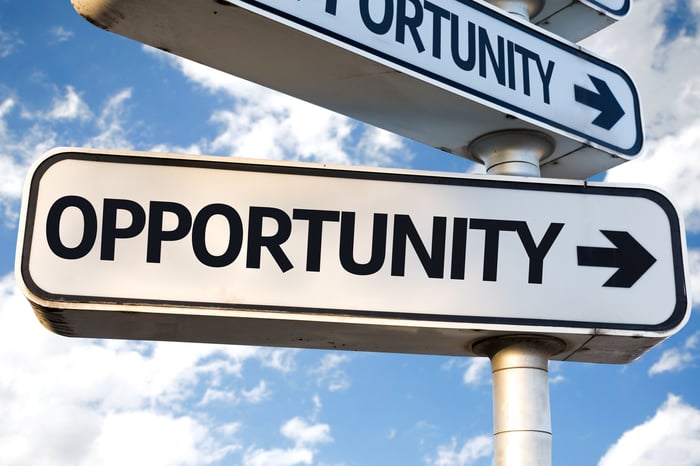 As things stand today, the company has a plan to move forward, but it involves divesting a substantial amount of its business. Factor in weak results from the segments it plans to keep as of last quarter, and the results aren't pretty. Wall Street, in fact, seems to be hating them. Furthermore, the continued deterioration in its operating results could put the dividend -- now yielding over 4% after the big sell-off -- at risk. At least on paper.

But within all the noise of asset divestitures, weak sales, and a murky future, Newell's plan to generate $10 billion to pay down debt and repurchase a whopping 40% of shares over the next 30 months could generate huge returns -- that's the potential reward. Or it could destroy more investor capital. That's the risk.

This dividend stock is on steady ground

Neha Chamaria (Cummins): Cummins' shareholders are well versed with ups and downs, given the cyclical nature of the company's business. But if there's one section of investors the company has consistently rewarded through thick and thin, it's income investors.

The North American trucking markets are roaring back to growth after a bumpy ride in the past couple of years, so much so that industry orders for the heavy-duty Class 8 trucks hit highs not seen since 2004 between January through July of this year. That bodes really well for Cummins, a leading engine maker with nearly one-third of the heavy-duty and almost three-quarters of the medium-duty truck market in its corner.

The risk is that economic conditions won't remain as strong forever, not to mention the looming threat to global trade as tariff wars heat up. Cummins has substantial operations outside the U.S., and tariffs could substantially drive the cost of raw materials higher.

Cummins has grown its dividends annually for more than 10 years now, and the pace is nothing to sneeze at: Its annual dividend per share increased almost 1,200% between 2006 and 2017. I don't expect Cummins to break its dividend streak anytime soon, which means in-the-know dividend investors might want to consider the stock's 20% year-to-date drop and 3.2% yield as an opportunity for the long haul.

These 5 Stocks Could Be the Next to Slash Their Dividends