Investors looking for value stocks should start with these leaders of unloved industries.

A good value stock is hard to find, especially these days. None other than Warren Buffett, the king of value investors, has lamented the lack of stocks and businesses selling at reasonable prices. Buffett summed up the dilemma, saying, "Prices for decent, but far from spectacular, businesses hit an all-time high."

With the price-to-earnings ratio of the S&P 500 near 25, stocks are considerably higher than the historical average P/E, at 15. However, there are still some value plays to be found in the market. You just have to know where to look. Keep reading to see why our contributors recommend AT&T (T -0.25%), Horizon Pharma (HZNP -0.56%), and Walt Disney Co (DIS -0.15%). 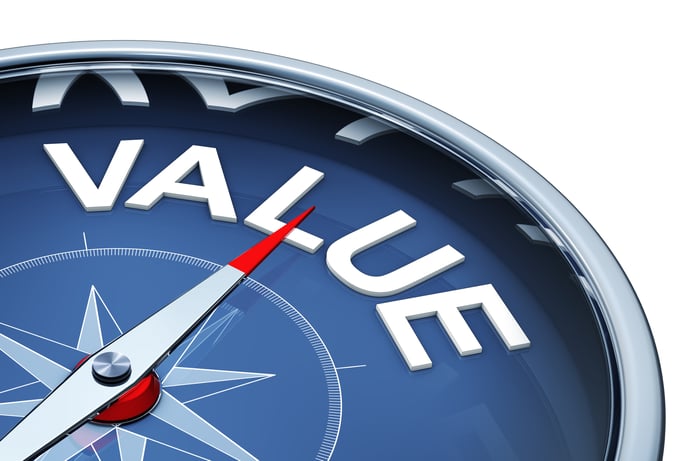 Travis Hoium (AT&T): The telecommunications business isn't getting much love from the stock market these days. Despite playing a key role in hundreds of millions of people's lives, wireless services are being priced like a commodity with very little growth potential, but I think that's about to change.

AT&T is one of the biggest wireless companies in the world with 89.2 million subscribers at the end of the second quarter of 2018. It also has over 1.1 million miles of fiber laid globally, and with DirecTV and Time Warner, it's also a major cable and content provider. The combination of all of these services makes AT&T a powerhouse built for a wireless future of on-demand content. That's why I think the stock is a steal at 9.3 times 2018 estimates and a 6.2% dividend yield even before considering growth.

It's on the growth front where I think investors are really underestimating AT&T. 5G is going to bring speeds usually associated with fiber networks to the wireless industry, enabling self-driving vehicles, virtual reality, and technologies we haven't even considered yet. This will increase the number of connections on wireless networks and should drive growing revenue as well. With one of the earliest 5G network launches, AT&T is set up for growth for years to come.

George Budwell (Horizon Pharma): Roughly three months ago, Horizon Pharma's stock was quite literally the cheapest revenue-generating biopharma in the entire market. The drugmaker was being castigated for its former life as a specialty pharma that profited from stately price hikes on medicines that could arguably be supplemented by generics.

Since then, the market has clearly decided to let Horizon out of the doghouse, so to speak. Thanks to the company's strategic decision to sail to the far safer shores of orphan and rheumatology drugs and away from controversial primary care medicines, Horizon's shares have appreciated by an astounding 40.4% year to date. But at about 11 times forward-looking earnings, Horizon's stock still doesn't appear to be fairly valued based on either its near- or long-term growth prospects.

During the second quarter, for instance, Horizon crushed consensus estimates for both its bottom and top lines thhanks to the surging sales of chronic gout treatment Krystexxa. That's key because Krystexxa's commercial launch is just getting under way in earnest, and it remains a long way off from achieving the company's peak sales estimate of $750 million. In short, this drug has a lot more room to grow, which should help to drive the drugmaker's top line higher in the near term.

Longer term, Horizon's growing orphan drug portfolio is expected to play a key role in creating value for shareholders. In particular, the drugmaker's experimental thyroid eye disease medicine, teprotumumab, is forecast to be a major revenue generator for the company in the coming decade, with peak sales pegged at $750 million.

All told, Horizon's stock comes across as incredibly cheap, given its below-average valuation for an orphan drug specialist as well as its strong growth outlook. As such, bargain-hunters may want to grab some shares soon.

Still the king of entertainment

Jeremy Bowman (Walt Disney Co): Walt Disney may have ceded the title of world's biggest entertainment company to Netflix, though it has since regained it, but investors may have overlooked the House of Mouse for too long.

I have been bearish on Disney at times as its legacy media business has hampered growth and delayed an overdue transition to streaming, but the simple fact is that Disney is a profit machine; it's diversified across businesses such as theme parks, cruise lines, movies, cable and broadcast networks including ESPN and ABC, and consumer products like toys. It owns valuable franchises such as Marvel, Lucasfilm, and Pixar, and at a P/E of 17, the stock has gotten too cheap to ignore.

With the prospective launch of Disney's streaming service, its release of ESPN Plus earlier, and the pending Fox acquisition giving it majority control of Hulu, Disney should be able to establish a strong position in the fast-growing streaming market.

Finally, despite the headwinds in its legacy media division, profits are still growing steadily. Through the first nine months of its fiscal year, earnings per share are up 21% to $5.67, partly due to a lower tax rate from the corporate tax cut, and revenue increased 7%.

Meanwhile, Disney is an established and reliable dividend payer, offering a yield of 1.5% today. The company will eventually emerge from this transitional era in a stronger position and with unbeatable brand assets -- especially if the Fox deal goes through. At this point, the stock is starting to look unreasonably cheap.