Ford Motor Company's (NYSE:F) management team has plenty on their plates in 2018. Rising aluminum and steel prices, possible tariff wars, Wall Street analysts questioning if CEO Jim Hackett will keep his job long enough to present the postponed investor day meeting and, of course, plateauing new vehicle sales in the U.S. market. Adding to those woes is Ford's passenger car sales. Just how bad is it, and what's driving the sales decline?

As the U.S. market plateaus, it was expected for automakers' sales to slow. True to that expectation, Ford's total sales have declined 2% this year through July. While that drop isn't eye-popping, glance over Ford's year-to-date sales chart and the outlier will quickly jump off the page. Ford's passenger car segment sales are down 14.5% through July compared to the prior year -- and getting worse with July's 27.1% year-over-year decline -- while its SUV segment is down only 1% year to date and its trucks managed to post a 5% gain thanks to its incredibly popular F-Series.

We know Americans have rekindled their love affair with larger SUVs and full-size trucks and are giving up their passenger cars, but is there more to it? The data in Edmunds' 2018 Q2 Used Car Report highlights one factor that is likely playing a major role: a widening gap between new-vehicle prices and used-car prices.

It's easy to get tricked by the broader numbers, as values for used vehicles overall hit record-high levels during the second quarter. But don't be fooled by that figure, because Edmunds' data shows that residual values of near-new cars -- 1- to 3-year-old vehicles only -- have weakened. In fact, that softness has helped create the widest gap between new and used average transaction prices the industry has ever seen. Essentially, consumers can opt for a near-new vehicle at a roughly 37% discount to the average transaction price of a new vehicle. That's a discount roughly 340 basis points greater than merely five years ago. In other words, the difference in value has increased roughly 25% over that time. 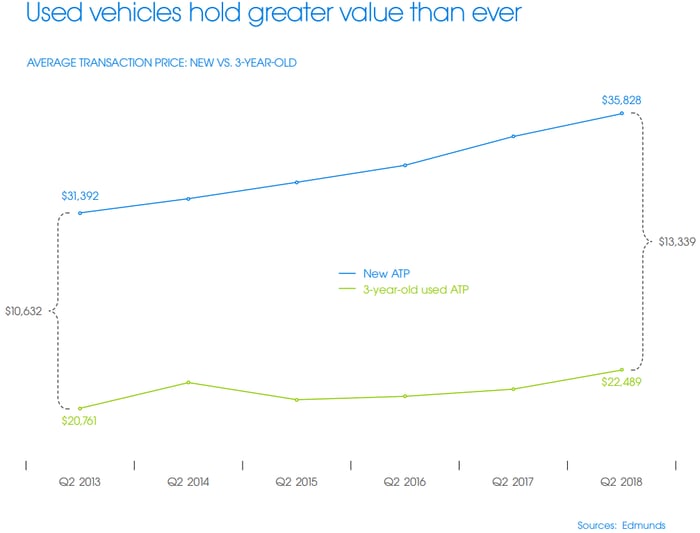 A widening price gap between new and used vehicles is bad news for Ford's new-car sales, as the near-new vehicles offer an excellent substitute product at an increasingly better value compared to the rising new-vehicle prices. Backing this notion is that 3-year-old vehicles are only sitting on dealership lots for 38 days, the lowest Edmunds has recorded for any quarter dating back to 2005. Demand for used vehicles is strong, but there is also a wave of off-lease units fueling supply of near-new units, which is keeping used pricing nearly flat.

The data gets worse for sales of Ford's cars because when you separate the data by vehicle segments, the greatest values for consumers opting for used rather than new are almost entirely cars. The top four rankings by the largest savings are all car segments. Starting from the top, purchasing a used luxury midsize car rather than new will save 48%, per Edmunds' report. The No. 1 ranking is followed by sports cars at 45% savings, then large and midsize cars at 43% and 41%, respectively. 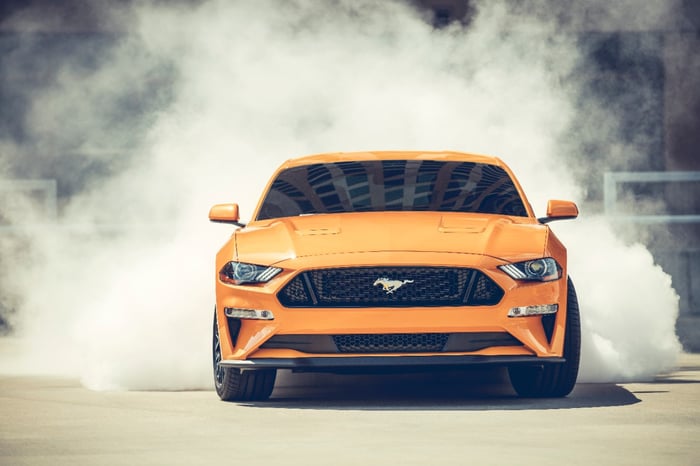 On the flip side of the value chart, you'll find large trucks offering 33% savings by purchasing used, and midsize trucks offering the least savings at 27% -- likely part of the reason demand for new trucks is much stronger, as the substitute product isn't as compelling. Midsize SUVs and compact SUVs are near the bottom of the value ranking as well, at 35% and 33% savings, respectively. Ford isn't the only brand struggling to send cars home with consumers, it's an industry wide phenomenon. However, Ford's sales could feel more pain as it switches its strategy and ends production of nearly all sedans in North America over the next few years, in favor of developing newer and more profitable crossovers, SUVs and mid-size trucks.

Yes, Ford's car sales are definitely bad and a concern that forced management to kill nearly all of its sedan models from its North American lineup and turn its attention to producing more profitable units like the returning midsize Ranger truck and Bronco in the years ahead. And debates have been waged about whether focusing most of its attention in North America on SUVs and trucks is foolish and repeating past mistakes. But if there's a silver lining in this data, it's that used SUVs and trucks aren't nearly as compelling as substitutes for new versions, which is hugely important for Ford's bottom line, as those new-vehicle sales keep the lights on in Detroit and carry much juicier margins. In fact, many investors don't realize just how important the F-Series alone is to the folks at the Blue Oval.

For shareholders, there are two takeaways from this data. First, keep in mind that while Ford's monthly and quarterly sales may be difficult to look at thanks to plunging car sales, the bottom-line strength of the company will continue to be powered by the segments that are currently healthy: SUVs and trucks. Second, it's important to keep abreast of data such as the Used Car Report from Edmunds because if near-new SUVs and trucks ever become a compelling substitute product for new vehicles, it could create problems for Ford's SUV and truck sales -- and that could be a massive problem for the company's profitability.