Just over a year ago, Facebook (NASDAQ:FB) officially launched its Watch platform, which the social networking juggernaut hopes can grow into an online video destination to rival YouTube. Since the release, Facebook has slowly added to the content catalog, which includes both user-generated content as well as professionally produced videos. Instagram has also launched IGTV as part of the company's broader push into video advertising.

Facebook has just announced that it is rolling out Watch all around the world. 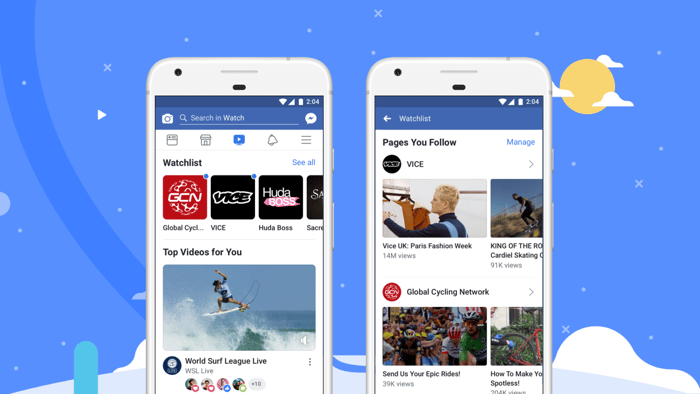 Facebook says that it has made the Watch experience more social over the past year in various ways, including displaying videos your friends may have interacted with, seeding shows "that have audience participation at their core," and adding videos from Pages to the Watch platform. Facebook also says that Watch now has over 50 million monthly active users (MAUs) within the U.S., requiring those users to watch just a minute of content to qualify as a MAU. Total time spent on Watch has soared by 14 times since the beginning of the year, according to Facebook.

Naturally, Facebook is hoping that a social angle can differentiate Watch from YouTube. While YouTube has long had a comments section that is infamous for being toxic -- where efforts to bring accountability by using real names there failed spectacularly years ago -- it's also true that most YouTube viewers aren't interacting with real acquaintances. That's where features like Watch Party, launched just last month, come into play. Watch Parties are a way for users to watch videos in real time together. On the earnings call that took place on the same day that Watch Parties were announced, CEO Mark Zuckerberg said the feature was already getting "real traction" during its testing.

The Ad Breaks program is being expanded in an effort to bolster monetization for content creators, and Facebook is also adding other tools to its suite of creative tools.

The broader challenge is that many Facebook users still aren't even aware of Watch's existence, highlighting the uphill battle that the company faces in building the brand. MarketWatch notes that half of adult Facebook users don't know what Watch is, citing data from The Diffusion Group. That data was derived from a survey of over 1,600 users.

It probably didn't help that Facebook initially buried Watch in its mobile app sidebar, but the social network has since added a dedicated Watch tab to the bottom of the app's interface. A year in, 50 million MAUs is a decent start, but not nearly where it needs to be for Watch to be a relevant player in the highly competitive space for your attention. For context, Facebook has 241 million MAUs in the U.S. and Canada.

Furthermore, a 14-fold increase in time spent doesn't mean much without knowing the absolute base that the growth is coming off of, and Facebook isn't disclosing Watch daily active users (DAUs), which would also provide greater detail around the platform's engagement. Zuck has also railed against passive video consumption recently, but I doubt the company would complain if Watch usage was predominantly passive, as encouraging people to be more socially interactive around videos in real time is easier said than done.

Expanding Watch internationally should help the company grow MAUs on the platform, which should encourage more creators and advertisers to get on board, but Facebook still has a long way to go before it can challenge YouTube's sheer dominance.