Please ensure Javascript is enabled for purposes of website accessibility
Free Article Join Over 1 Million Premium Members And Get More In-Depth Stock Guidance and Research
By Rich Smith - Sep 6, 2018 at 11:50AM

California steps in to save the company, and Wall Street takes notice.

Pacific Gas & Electric, the company now officially known as PG&E and having yet another designation for its stock ticker -- ( PCG -1.09% ) -- has had a tough year.

In December, PG&E stock plunged after management announced that PG&E would suspend payment of its 4% dividend because of "uncertainty related to causes and potential liabilities associated with the extraordinary October 2017 Northern California wildfires." Between that and other declines, PG&E shares have underperformed the S&P 500 by 50 percentage points over the past 12 months.

But one analyst thinks that underperformance is at an end. 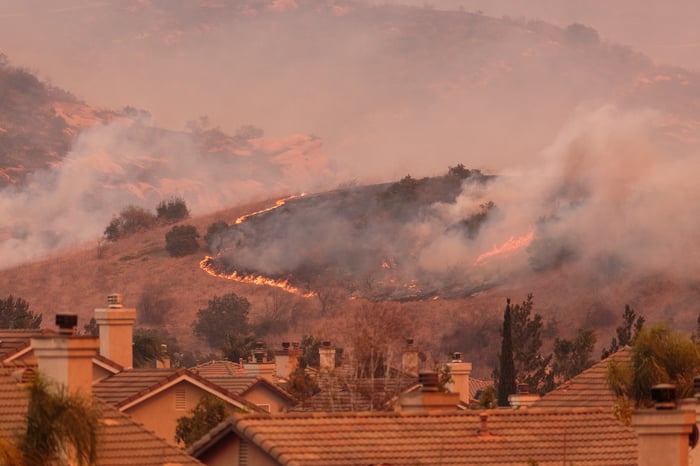 What went wrong for PG&E

Let's review. In 2017, an event now known as the October Fire Siege saw California plagued by a series of more than 100 wildfires across Sonoma, Napa, Mendocino, Butte, Humboldt, and Lake counties in Northern California, requiring more than 11,000 firefighters to combat them.

CNBC reports that California blames PG&E equipment -- specifically, power lines contacting fallen trees -- for causing "at least 16" of these wildfires, resulting in billions of dollars' worth of fire damage, thousands of homes destroyed, and multiple fatalities. PG&E has suffered credit downgrades and is facing higher insurance premiums as it tallies up its potential liabilities. In Q2 2018, it took a $2.5 billion charge to earnings in anticipation of paying legal damages, and has been forced to scale back its expansion plans as money becomes tight.

The news could get even worse. Fitch Ratings says it thinks PG&E could ultimately be held liable for as much as $15 billion in total damages from the October Fire Siege and other wildfires for which the company may be held responsible. Other pundits say the bill could reach as high as $17.3 billion.

Now for the good news (for PG&E investors). Last Friday, California's legislature passed a bill that helps to limit PG&E's liability for damage caused by wildfires. Among other measures, the bill permits the utility to float bonds backed by rate increases to be paid by its customers, to raise money to pay damage claims. It also helps finance infrastructure improvements by PG&E through utility rate hikes.

The Wall Street Journal says passage of the bill "reduces the risk of a PG&E bankruptcy," which is clearly good news for shareholders.

California Governor Jerry Brown has indicated he will sign the bill.

After taking a few days to digest the news, this morning, Argus Research announced it's upgrading PG&E to buy and assigning it a $54 price target, indicating it sees 15% upside in the stock.

"[T]he company's recent California legislative victory will reduce its liability for last year's wildfire as its earnings outlook improves," Argus reasons, according to TheFly.com. Yet even with the bankruptcy risk removed, the analyst notes that investors are still valuing PG&E stock at only 12.3 times forward earnings -- more than a 30% discount to the average valuation among utility stocks.

On top of that, Argus sees it likely that PG&E will soon announce a timeline toward reinstating its dividend, the lack of which is surely a drag on the stock given how much income investors rely on utility stocks for dividend income. A return to 4% dividend payments, while a drain on profits, would almost certainly make PG&E look more attractive to dividend investors.

And yet, despite all of this, I have to admit that I'm leery of taking Argus' advice and buying PG&E shares. On the one hand, yes, California has taken (or is about to take) a big bankruptcy worry off of investors' minds. On the other hand, though, I don't see this business as particularly attractive even with bankruptcy off the table.

PG&E, although technically profitable, burns cash in most years. Last year -- the first in five to see PG&E generate positive free cash flow -- the company generated just $336 million in FCF, or about $0.20 per $1 in reported GAAP profit. In each of the four previous years, the company burned cash. PG&E carries a huge debt load -- more than $17 billion net of cash on hand, and that's before the company takes on even more debt to pay its wildfire-related legal obligations.

Growth-wise, analysts forecast only a 4% long-term growth rate for the company, and with its operations being located in the state perhaps best-known for subsidizing solar panels that take customers off the electric grid, I don't see that changing any time soon.

Long story short: Even if PG&E isn't a bankruptcy candidate after its wildfires, I just don't see the stock as a compelling buy.