If it ain't broke, don't fix it. The grammar isn't correct, but the principle usually is.

My single greatest investing mistake over 20-plus years of buying stocks is selling too soon. I could tell you about a too-long list of stocks that I sold only to later kick myself for doing so. I won't go into that, though. Instead, allow me to share with you my three biggest stock holdings right now: Apple (NASDAQ:AAPL), Align Technology (NASDAQ:ALGN), and Alphabet (NASDAQ:GOOG) (NASDAQ:GOOGL).

All three of these stocks have had their ups and downs since I bought them. But they've grown to become my biggest holdings because I stuck with them. Here's why I plan to hold on to Apple, Align, and Alphabet for a long time to come. 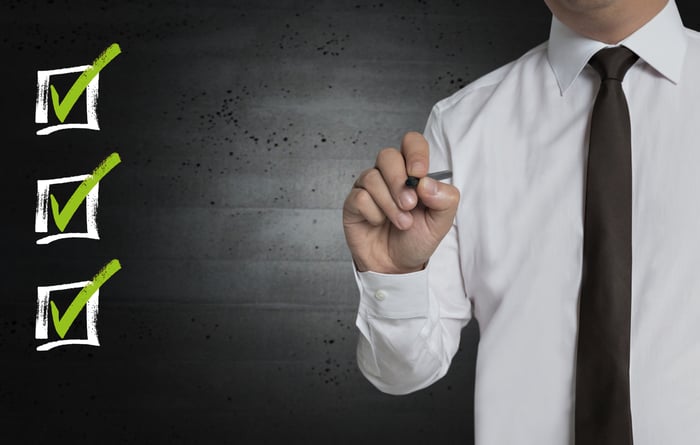 I have owned Apple for a longer period than any other stock in my investing portfolio. My Motley Fool colleague Brian Feroldi, also a longtime Apple shareholder, wrote in June listing 10 reasons why he was selling his Apple stock after being a self-described "fanboy" for nearly 20 years. Brian, as he always does, made some great points. I'm not selling my Apple shares, though. Why?

For one thing, I agree with Warren Buffett (who has continued to buy more Apple shares) that Apple claims an extraordinarily strong customer ecosystem. To use another of Buffett's favorite words, Apple has a strong moat. It's a moat that I can see by just looking around. Everyone in my immediate family uses iPhones and iPads. Most of my extended family and friends own iPhones. And when it's time to get a new phone, nearly all of them will buy the latest iPhone. Sure, some Apple customers will switch to other products. I'm betting that most won't.

I am also enamored with Apple's mind-boggling free cash flow. The company generated over $58 billion in free cash flow over the last 12 months. Apple will use most of that cash flow in one of four ways: investing in developing new products, making strategic acquisitions, buying back shares, or boosting its dividend. All four of them hold the potential to make me more money as a shareholder.

Speaking of new products, I think that augmented reality could be a huge new market for Apple. The company is clearly making a big bet on augmented reality technology, one that I suspect will pay off enormously over the next five years.

After several years of liking Align Technology, I finally bought the stock in late 2017. So far this year, Align is one of the biggest winners in my portfolio, soaring nearly 70%. A few years ago, that kind of big jump might have tempted me to "lock in some of the gains" by selling shares of Align. Now, however, I view selling as giving up on potential future gains.

My view is that Align has plenty of opportunities to keep its stellar track record of growth going. International markets rank near the top of the list. In the second quarter, Align opened an Invisalign treatment planning facility in Germany, which claims the largest population in the European Union. The company should also see increased sales in emerging markets.

Just as important, though, is the potential for Align to treat more severe types of misalignment of teeth. Invisalign aligners can currently be used for only around 60% of orthodontic cases. Align should be able to expand its addressable market significantly through innovation.

Google parent Alphabet is one of my favorite stocks. In fact, when I was asked last month to identify a stock that I would recommend buying and holding for the next two decades, Alphabet was my immediate response.

There are two things that I especially like about Alphabet. Like Apple, the company has a really strong moat. I don't see anyone knocking Google or YouTube from their market dominance. That means Alphabet -- again like Apple -- should be able to count on generating a large free cash flow for years to come.

I'm even more excited, though, about Alphabet's multiple paths to grow earnings. Home automation should be a growth opportunity for the company's Nest products. Alphabet is quietly becoming a leader in healthcare with its Calico and Verily subsidiaries.

Self-driving car technology presents the greatest opportunity of all for Alphabet. The company's Waymo business unit already ranks as the front-runner in developing technology for self-driving cars. Investment bank UBS even predicts that the self-driving car market will total $2.8 trillion by 2030, with Waymo capturing 30% of the market. That's an $840 billion opportunity for Waymo if UBS is right.

What would change my mind

Could I change my mind and sell any or all of these stocks? Sure. But it would require a fundamental change in the reasons why I bought the stocks in the first place. For example, if some technological innovation threatened to render iPhones, Invisalign aligners, or the Google search engine obsolete, I'd sell. If any of the companies had a major scandal that undermined my confidence in the management team, I'd sell.

There's also the possibility that I could be convinced that putting my money into another stock would generate significantly greater long-term returns. For now, though, that's not the case. I have no need to fix my investments in Apple, Align Technology, or Alphabet. They're not even close to being broken.