Activision Blizzard's (NASDAQ:ATVI) senior leadership team explained the most important aspects of its growth strategy to analysts during the company's second-quarter earnings call. Here are the major points for long-term investors.

Virtually all of our content is based on intellectual property we own, and created by our wholly owned studios in the U.S., Canada, Europe, and Asia and staffed by the most talented programmers, designers, artists, and animators in the world. We are in a privileged position. We have a direct digital connection with our customers. We are a creator of premium content, and we have multiple monetization models at scale.

As the owner of valuable intellectual property in the form of its popular game franchises, characters, and storylines, Activision Blizzard has many ways to win. Its games can be accessed on game consoles, personal computers, and mobile devices in almost every country in the world. In turn, more than 350 million people consume Activision Blizzard's content each month, spending roughly 50 minutes per day interacting with its games.

Moreover, the digital entertainment giant can monetize its IP via game sales, in-game content purchases, subscription services, and in-game advertising. With these diverse revenue streams, Activision Blizzard is well-positioned to profit from the growth of the global gaming industry in the years ahead.

Activision Blizzard is winning in esports

Last weekend, the Overwatch League held its inaugural grand finals event at the Barclays Center in New York. The event was the culmination of a very successful inaugural season. Our incredibly talented employees built a global competitive league from the ground up. And in our first season alone, we brought celebrating our players to a new level, our live event and viewing experience and world-class production quality on par with the best of professional sports.

Activision Blizzard partnered with 12 team owners for the first season of its Overwatch esports league, including respected traditional sports owners such as Robert Kraft of the New England Patriots. It also signed media rights deals with streaming and broadcast leaders Amazon and Disney. Better still, its championship event at Barclays Center -- home of the NBA's Brooklyn Nets and NHL's New York Islanders -- sold out, and was watched on TV and online by millions of viewers worldwide. 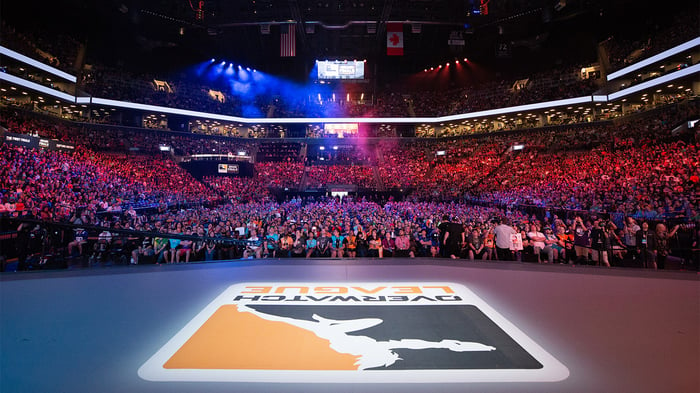 Activision Blizzard intends to develop additional esports leagues in the future based on the success of the Overwatch League, which is on pace to generate nearly $1 billion in revenue for the company. As such, Activision Blizzard is perhaps the best way to play the surging growth of esports and competitive gaming.

A massive opportunity in mobile

While esports give our existing fans a new and everlasting way to celebrate their favorite games and expand the appeal to broader audiences, our mobile initiatives will expand our access to our iconic franchises by making them available to hundreds of millions of new players around the world. We have multiple mobile initiatives underway, including some with partners with strong mobile experience and local market knowledge.

In terms of global reach, the opportunity in mobile gaming dwarfs that of traditional game consoles. As an example, Activision Blizzard's King Digital Entertainment mobile business reported 270 million active users in the second quarter, compared to 45 million and 37 million for its primarily console- and PC-focused Activision and Blizzard segments, respectively.

To better seize this opportunity, Activision Blizzard is partnering with Chinese gaming titan Tencent (OTC:TCEHY) to bring its popular Call of Duty game to China's massive gamer base. During the call, Activision Blizzard president and chief operating officer Collister Johnson said that the deal would bring "the best-selling console franchise of the last two decades to tens of millions of Chinese mobile gamers."

The Tencent partnership, combined with a major new game launch from one of King's franchises, should help to accelerate Activision Blizzard's mobile growth in the second half of 2018 -- and further expand its already impressive global reach.

On a trailing 12-month basis, operating cash flow of $2.08 billion is up modestly over [the] prior year. We paid a cash dividend of $0.34 per common share, which was up 13% year over year.

Activision Blizzard's highly profitable operations allow it to produce robust cash flow; it generated more than $0.25 in free cash flow for every dollar in revenue over the last year. It also possesses a strong balance sheet, with nearly $5 billion in cash reserves. Together, these allow Activision Blizzard to reinvest in its business, pay down debt, and still be able to reward shareholders with a rising dividend income stream.

Dividends account for only about half of Activision Blizzard's free cash flow, and the previously mentioned growth drivers are likely to boost its profits in the coming years; investors can expect additional dividend increases from this gaming leader.