There have been several studies over the years to support the conclusion that companies that steadily increase their dividends tend to outperform the broader market over the long term.

Activision Blizzard (NASDAQ:ATVI) is one of the leading video game makers in the world with 352 million monthly active users. Its game franchises span popular titles like World of Warcraft and Overwatch, and even include one of the top grossing mobile games, Candy Crush.

Activision is no Dividend Aristocrat, but it is a Dividend Challenger with the potential to be an elite dividend payer over the long term, thanks to its ability to generate loads of free cash flow and capitalize on significant growth opportunities in esports.

Activision currently pays a dividend yield of 0.45%, which is not much compared to the S&P 500 index's average yield of 1.8%. But a few characteristics about Activision should greatly appeal to dividend growth investors.

The game maker first declared a dividend of $0.15 per share in 2010 and has increased it every year since then, as you can see in the following table:

One of the most important considerations in identifying a good dividend growth stock is to evaluate the payout ratio, which shows the percentage of a company's annual profits distributed to shareholders as dividends. Specifically, the payout ratio is calculated by dividing total dividends paid annually by a company's net income (the calculation can also be performed by dividing dividends paid per share by earnings per share). Some of the largest companies in the S&P 500 index regularly increase their dividends while sporting payout ratios anywhere from 25% to 75%. Activision's payout ratio currently stands at 51%, meaning it pays out roughly half of its annual net income in the form of dividends.

While the traditional payout ratio calculation using net income is helpful, free cash flow can sometimes be the better metric to use in the denominator because it shows the actual amount of cash left over for dividends after all cash obligations have been met and reinvestments in the business have been made.

Ideally, we want to see that a company is not only committed to increasing its dividend over time (which Activision has done), but also has the potential to increase the percentage of free cash flow that is allocated to dividend payments. In 2017, Activision paid out 11% of its free cash flow as dividends. And the year before that it paid out 10%.

If Activision were to triple its payout to 30% of free cash flow, the company would still have a relatively low payout and its dividend yield would be about 1.50% -- much closer to the S&P 500's yield. One reason Activision doesn't pay out that much is because it's a relatively small organization with much more growth potential than the average large-cap company found in the major indices, so reinvesting a portion of its attractive cash flow in itself remains a priority.

Even after reinvestment in the business, Activision still generates plenty of free cash flow (about 28% of annual revenue) that it can distribute back to shareholders in the form of dividends or share repurchases. As you might guess, making video games doesn't entail huge capital expenditures.

The interesting thing about Activision is that its payout ratio on a free cash flow basis has actually declined since 2010, even though the dividend per share has more than doubled. The company's dividends per share increased due to share repurchases, which reduced the share count by 38%.

Activision's payout ratio declined because free cash flow has grown 61% since 2010, while the amount of dividends paid has only increased 35%. One could argue that the company has raked in cash faster than management can dish it out.

Incidentally, the bulk of the 38% share reduction came in 2013 when Activision bought back Vivendi's controlling stake in the company. This was a special circumstance, and may not happen again, but it shows that management is willing to buy back a meaningful amount of the company's shares if the situation warrants it.

Even leaving out the possibility of future share repurchases or increases in the payout ratio, Activision has demonstrated the ability to grow revenue and free cash flow over many years, as this chart shows: 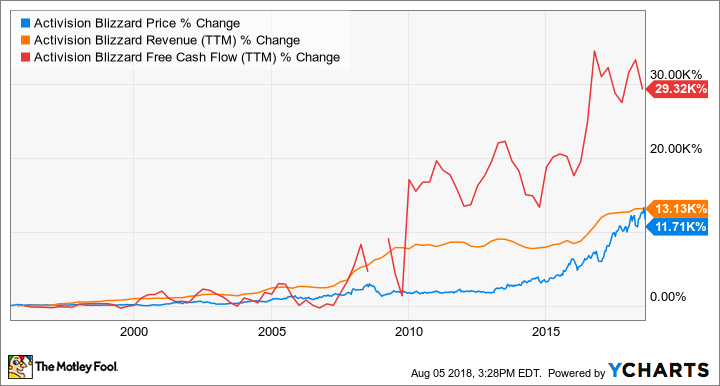 The video game market is growing about 11% per year, according to gaming industry data research provider Newzoo. That tailwind, combined with Activision's knack for producing great games that attract large player bases, in addition to exciting growth initiatives in esports and consumer products, will likely power further growth in free cash flow over the long term -- and climbing dividend distributions.

One more thing shareholders should be aware of regarding Activision's dividend is the company's $4.4 billion of long-term debt, which resulted from the acquisition of mobile game maker King Digital Entertainment in 2016. Shareholders don't need to worry, however, as there's more than enough cash on hand to cover this obligation ($4.857 billion), and management is planning to pay down as much as $1.8 billion of the debt during the third quarter of this year. The company should be able to reduce debt and still increase its dividend given its low payout ratio and the roughly $2 billion in annual free cash flow it generates.

Recently, Moody's and Standard & Poor's rating agency both upgraded Activision's credit rating. On the company's first-quarter earnings conference call, CFO Spencer Neumann said, "Each [of the major ratings agencies] has now upgraded our rating three times in about 2.5 years as we continue to demonstrate the strength, diversity, and recurring nature of our business."

Indeed, with over 300 million players spending an average of 50 minutes per day playing the company's games, Activision is in a great position to continue monetizing its gaming brands, while growing free cash flow and hiking dividends over the long term.