Earlier this summer in June, I discussed significant factors underpinning El Pollo Loco Holdings Inc's (NASDAQ:LOCO) stock price recovery -- namely, the staunching of losses originating from an ill-fated expansion in Texas and the initial actions of new CEO Bernard Acoca. Since then, shares of the citrus-marinated, fire-grilled chicken fast-casual chain continue to revive: With a boost from second-quarter 2018 earnings issued last month, "Loco" stock has now ascended more than 33% year to date. 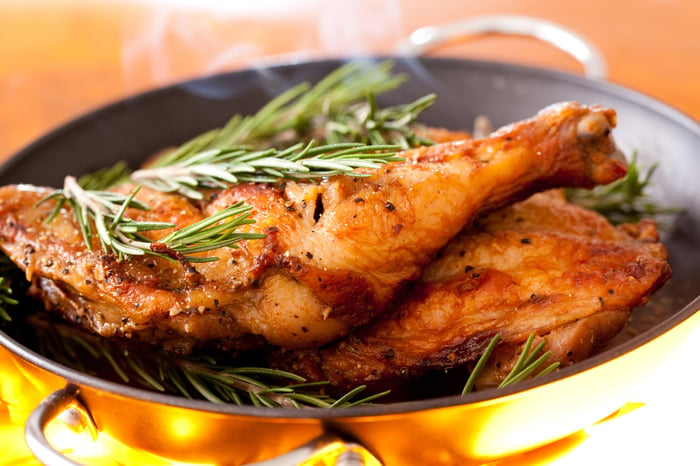 El Pollo Loco's second-quarter financials demonstrate the stabilization of restaurant contribution -- i.e., restaurant revenue less direct restaurant expenses like food, labor, and occupancy costs. This is primarily due to a tighter control over direct expenses in the current year versus 2017.

Consequently, restaurant margin (restaurant contribution divided by revenue) of 19.5% through the first two quarters of 2018 slightly exceeds management's full-year projected range of between 18.7% and 19.3%. This is despite higher wage expense due to labor law changes in California, where most of the company's restaurants are located.

Systemwide comparable sales also have firmed up, decreasing just 1% through the first six months of the year against a projection of flat "comps" for the entirety of 2018.

For some insight on the components of the slight dip, we can look at company-operated stores. While traffic at company-operated restaurants has decreased 2.1% year to date, average check size has improved 0.3%, for a total comps decline of 1.8% at locations the company runs.

This bump in check size reflects management's decision to concentrate on $5 value offers while avoiding rounds of steeper discounting, characterized by the $3, $2, and $1 value deals that quick-service restaurants (QSRs) are currently putting forward. El Pollo Loco focuses on the fast-casual market, and while it's vulnerable to QSR activity in a highly promotional environment, management's call to stick with higher price points on value deals will serve the organization's bottom line over a longer time horizon.

El Pollo Loco recently commissioned a consumer survey to learn more about the company's customer base and growth opportunities. During the second-quarter earnings call, Acoca relayed that, while the final results of the research won't be available until October, management has already derived extremely useful information to help tweak the organization's marketing approach.

Preliminary results indicate that, while the Loco brand has broad appeal, the company's most faithful demographic still tends to be comprised of Hispanic customers. The brand also resonates with families (30% of daily sales are comprised of family meals), as well as consumers who seek healthier, cleaner-label food when dining out.

As a result, El Pollo Loco has already increased Spanish-market advertising, while tilting its promotions and value offerings toward family meals. Acoca shared that comps in the first month past the reporting period (i.e. July) were quite strong, and management is optimistic about its ability to pull in higher traffic to stores, going forward.

As I described in detail in March, the brunt of Loco's impairment charges from an all-in expansion into the Texas market were taken last year. The company wrote off nearly $28 million of assets in Texas in 2017, alongside roughly $5 million of impairments in California and Arizona.

While El Pollo Loco still is periodically writing down bad assets -- including a $4.0 million charge last quarter covering the closure of two additional restaurants in Texas and an impairment charge on an Arizona location -- it's also resuming expansion at a reasonable pace and with more thoughtful investment. Most of the company's new units feature the contemporary "Vision" format, which hearkens back to the company's ethnic Mexican roots, while placing its signature kitchen grill more prominently within customer sightlines.

The chain expects to open 15-18 new restaurants in 2018 between company-operated and franchised locations. CEO Acoca has signaled that the development team is working on a 2019 pipeline but isn't yet ready to share an expansion count for the coming year.

I believe that El Pollo Loco will pick up its development pace in 2019. This is one of the key pieces of information that could catalyze further gains when the chicken franchise next reports earnings in early November.