It's been a weird year for Corning (NYSE:GLW), which saw its stock hit highs near $35 a share in January, only to plunge 18% a month later after reporting a big quarterly loss.

It would take Corning stock another eight months to recover to the prices it enjoyed back in January -- a level only finally reached this month after an earnings report of another color entirely showed Corning's revenues rising and its earnings surging once again. Now, with Corning's head finally back above water, one analyst is stepping forth to predict that Corning will outperform the market over the coming year. 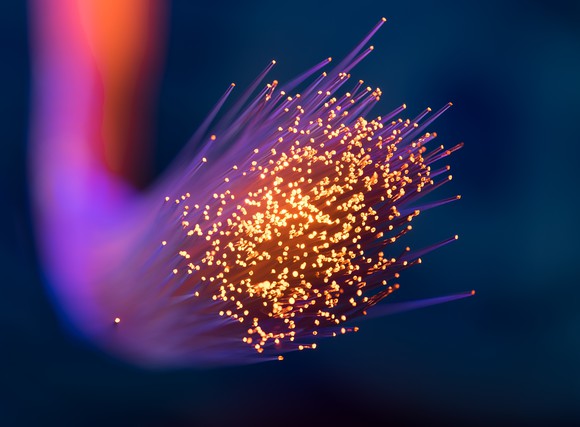 Fiber optics are beautiful -- but how viable will they be in the age of 5G internet? Image source: Getty Images.

This morning, analysts at investment megabanker Citigroup announced they're upgrading Corning stock from neutral to buy. Citi's assigning the world's most famous glassmaker a $40 price target, according to a new write-up on TheFly.com.

If they're right about that, investors can expect to enjoy a near-12% profit from owning Corning stock over the next 12 or so months. Throw in a modest 2.2% dividend yield, and the total profit potential from this one could be as much as 14%.

But is Citigroup right? That's the real question.

Citi sees "multiple vectors" for Corning to grow revenues, margins, and profits, but two stand out above the rest. On one hand, the analyst sees "better display pricing" as a trend that can boost both sales and profit margins in Corning's Display Technologies division, the company's second largest with trailing sales of $3 billion, and already its most profitable with an after-tax profit margin of 27.7% (according to data from S&P Global Market Intelligence).

The prospect of even stronger sales and even stronger profit margins on those sales sounds propitious for Corning. It's also probably correct. Last quarter, Corning management commented that "the pricing environment in Display Technologies is the best in more than a decade." (Albeit, investments made to capitalize on the demand for display glass reduced profits from this business by 15% year over year.)

At the same time, though, Citi cited "optical demand strength" as the second leg of its buy thesis -- and it's here that I take issue with Citi's forecast.

Is past prologue -- or not?

On one hand, yes, Optical Communications glass (used for fiber optics) is undeniably one of Corning's greatest strengths -- today. With sales of $3.5 billion last year, it's Corning's biggest business, even if its 9.6% profit margin means it's not necessarily the most profitable. Optical Communications also got a whole lot bigger last quarter, with sales rising 16% year over year and after-tax profits up 17%.

That being said, all of the talk these days is about how "5G" wireless internet is going to upend the business of delivering internet to consumers in the next few years. Verizon is supposed to launch its "5G Home" internet service in just a couple of weeks, and T-Mobile won't be far behind.

Granted, even with its "technical and economic advantages" over fiber, not everyone is convinced 5G wireless will completely replace fiber optic internet using Corning cables. FierceWireless, for example, believes it's more likely that the two technologies will prove to be complementary. Even if that's true, though, high-speed internet service delivered by 5G is certain to soak up at least some of the demand for internet bandwidth, which would otherwise flow through Corning's optical communications glass. To the extent it does, it's going to crimp growth in this Corning division -- perhaps enough to negate Citi's buy thesis.

If Corning stock were trading at some incredible discount to intrinsic value, of course, this might not be a concern. Any risk to an investment can be absorbed -- if the price is right.

My problem with Corning stock, though, is that it's not a particularly cheap-looking stock right now. Corning has reported no net GAAP profits over the past 18 months of earnings reports. Although the company is free-cash-flow positive, with only $348 million in cash generated over the past 12 months, Corning stock is trading for more than 81 times free cash flow. And with its cash generation so weak, Corning's cash reserves have been falling, and its debt levels rising, for more than a year now.

Long story short, the stock's unattractive valuation, combined with my own doubts about one-half of Citigroup's buy thesis, make it impossible for me to recommend Corning at today's prices. Citi is wrong to recommend it.