Even losing its COO can't stop the red-hot shares of the arts and crafts marketplace operator.

Etsy (ETSY 4.56%) is one of this year's biggest and more surprising winners in the stock market. Shares of the arts and crafts marketplace operator have soared 147% in 2018. And it seems as if events that might sometimes be seen as bad news are being interpreted by the market as stock-propping positive developments.

The stock hit another all-time high on Thursday, climbing 3% on the day, after the company announced that a key executive was leaving. COO Linda Findley Kozlowski will leave Etsy to pursue other opportunities by the end of the year.

Someone in senior leadership bolting for greener pastures is often seen as a red flag. And Etsy also declaring that it doesn't expect to name a replacement could've been spun by Wall Street as a reason to sell the stock. As great a job as CEO Josh Silverman has done to turn things around at Etsy, do we really want to give him even more to do? But Teflon-coated bulls are winning this game right now. 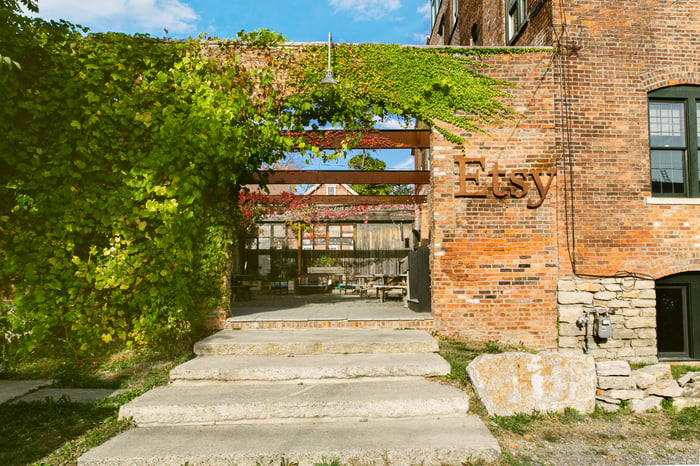 The art of crafts

Etsy's rally over the past year is generally well earned. The dot-com darling has rattled off five consecutive quarters of accelerating revenue growth, and that's something you don't see very often given life cycles where deceleration is the default factory setting. Etsy's 30% top-line surge in its latest quarter is its strongest showing in nearly two years. It's doing right by its investors.

However, the stock is also being given the benefit of the doubt. Etsy shares soared 28% three months ago after the company announced that it would be jacking up its selling fees. The entrepreneurial artisans who have set up camp on the online marketplace are now paying Etsy a transaction fee of 5% on gross merchandise sales, up from 3.5%.

It's true that stocks tend to behave favorably when companies raise prices. Higher fees boost margins and exude corporate confidence. However, if Etsy had boosted its transaction fees a couple of years earlier -- when the stock was under fire with the launch of Amazon Handmade and the emergence of other digital platforms -- it would've been written off by investors as a bad tactical move.

Analysts are loving Etsy. Tom Forte at D.A. Davidson and Laura Champine at Loop Capital are boosting their price targets to $59 and $65, respectively, despite the COO's exit and a stock that has arguably outpaced its fundamentals by roughly tripling over the past year. Champine is encouraged by Etsy's plans to invest in marketing and improving the user experience in the hopes of boosting buyer frequency. Forte is spinning Kozlowski's departure as Etsy leadership being confident that it can do more with less by doing away with the COO role.

Etsy is hitting it out of the park these days. Its platform's popularity keeps growing, and Etsy's getting better at convincing merchants on its site to pay up for other services (the 55% spike in services revenue in its latest quarter outran the 20% pop in gross merchandise sales). The long-term rally is justified, but sometimes you have to wonder if some of the daily upticks might be overdone.