LaCroix maker National Beverage (NASDAQ:FIZZ) recently posted first-quarter earnings for its 2019 fiscal year. In the quarter, revenue grew 12.6%, while gross profit increased 10.7%. This is a break from the recent past, in which National Beverage's gross profit regularly outpaced its top line due to the growth of its higher-margin sparkling water brands.

This quarter reversed the trend, as cost of sales per case rose 2.1%, lowering gross margins from 40.2% a year ago to 39.5%. Management attributed the margin decline to rising aluminum and freight costs. These costs have hit the entire packaged food and beverage industry.

The lower overall company growth rate was due to declines in carbonated soda, which not only fit with the current industry trends, but is also attributable to the company shuttering its private-label soda operations last year, affecting year-over-year results.

So how big could LaCroix (and thus the Power+ segment) get? CEO Nick Caporella hinted at a couple of ways in which the company is looking to accelerate LaCroix's growth. 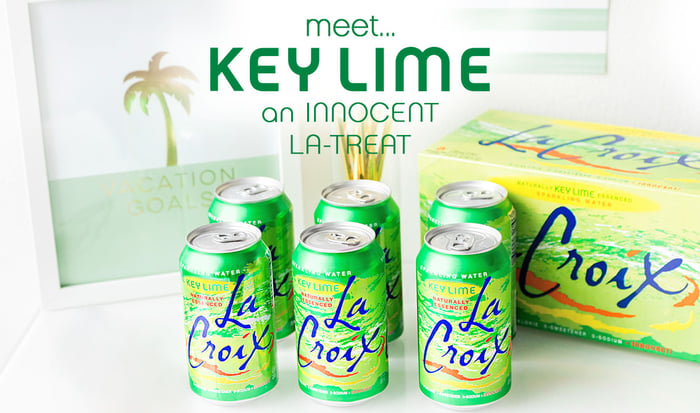 In the company's quarterly press release, Caporella said: "We are also exploring packaging and distribution options to expedite the introduction of our sparkling waters into additional channels and markets. LaCroix's overwhelming acceptance in Canada (affectionately pronounced as 'LaKwah' by our French-influenced friends) 'fuels' our quest to spread the Innocence of LaCroix beyond our borders to satisfy the healthy consumer."

The mention of "overwhelming acceptance" in Canada is new as far as I can tell. La Croix appears to have only entered Canada in June 2017 through Whole Foods, now owned by Amazon. Since the company doesn't disclose sales by geographic segment, we will have to take Caporella's word for it that the brand has been enthusiastically embraced by our neighbors to the north. Of course, there's no reason to doubt this. LaCroix is seemingly popular everywhere in America across the health-conscious millennial set.

(According to the drink's website, it's pronounced La-CROY; "rhymes with 'enjoy' " and is gluten-free, vegan and Kosher. The "Natural Flavors" are "derived from the natural essence oils extracted from the named fruit" and they have no sugars or artificial ingredients.)

The entry into Canada pairs with a May 2017 distribution deal with Hudson News, which stocks thousands of smaller retail outlets in the Northeast, outside of the big-box stores and grocery stores that already carried LaCroix.

LaCroix isn't sold outside the U.S. and Canada, but the company appears to be making incremental progress on geographic expansion. I'd really like to see the company be more aggressive in this regard, but we will have to wait for more disclosures. National Beverage doesn't give much detail or hold conference calls, which is the setting in which analysts ask questions of management. But I don't see any reason why the brand can't be popular overseas.

Caporella also hinted at new Latin-inspired products, perhaps fueled by ambitions to enter Mexico or Latin America. Caporella was quoted in the press release as saying, with a chuckle and a smile, "we are engaged in a launch to captivate the 'scent' of exciting, Hispanic 'hip' LaCroix innovations ... what better place than Miami to try our new experience. Our pipeline is in 'motion' as they say in Little Havana -- so stay tuned for exciting news as we move the 'rhythm' into our very own Miami. Momentum, all the way to Havana ..."

I'm not exactly sure what Caporella is describing here (as is often the case). It appears, however, that the company will be launching new Latin-themed sparkling water drinks, and then testing them in Miami in the near future. National Beverage is based in Fort Lauderdale, Florida.

The company in 2014 launched the LaCroix Curate flavors, which combine flavors in a sleeker-looking can. Curate uses Latin-inspired marketing, giving Curate flavors Spanish- or French-inspired names such as Cerise Limon (Cherry Lime) or Pomme Baya (Apple Berry). Curate means "cure yourself" or "take care" in Spanish.

Since Curate has been around for almost five years, it will be interesting to see if the company is planning to build on this product extension or launch an entirely new brand segment.

The key to National Beverage's stock is LaCroix, and the key to LaCroix's success will be branded product extensions as well as geographic expansion. It seems that management gets that, as Caporella so colorfully informed us.