Let's play a quick game. See if you can guess which company I'm talking about in the two examples listed below:

Company 1: An innovative internet company took the country by storm, but found it couldn't properly facilitate online transactions without its own proprietary digital payments platform. With the credibility of the parent company on the line, the new platform enabled seamless purchases to be made across the parent company's site, smoothly paving the way for increased sales and profitability.

Company 2: Realizing that small and medium-sized businesses were underserved but made up the backbone of the country's economy, this company began selling affordable hardware devices that allowed micro-merchants to accept card and digital payments. As the popularity of these devices grew, this payment company began expanding its ecosystem, offering other services these small businesses sorely lacked.

If you guessed these scenarios applied to PayPal Holdings and Square -- congratulations! Those are perfectly good guesses...but wrong. Both examples actually apply to the same company and describe how PagSeguro Digital Ltd. (NYSE:PAGS) began to move in on the Brazilian payments industry. 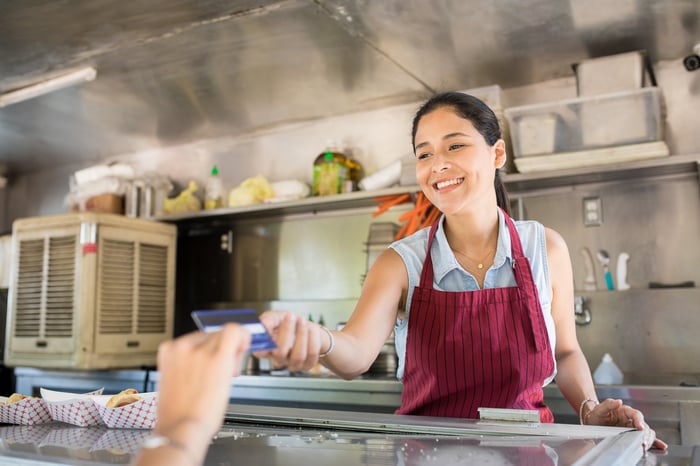 Credit card and digital payment acceptance is rapidly growing in Brazil, a trend PagSeguro believes it can capitalize on. Image source: Getty Images.

UOL, Brazil's largest internet content producer, started PagSeguro as a way to empower e-commerce in the South American country in 2006. In 2013, smartly sensing the need for smaller merchants to be able to accept more payments at the point of sale, PagSeguro began rolling out mobile products that could make this happen. The devices gained popularity because, unlike incumbent industry players in Brazil, PagSeguro did not rent out its hardware but allowed merchants to acquire the devices through installment payments. PagSeguro soon began building out its ecosystem with other apps and features, including enabling P2P payments, an app that allows customers to add minutes to their mobile plans, and a bill-payment app. Earlier this year, UOL spun off PagSeguro and, though the stock price has not performed particularly well since its IPO, there is reason to believe that story might be about to change.

In fact, here are three reasons why investors looking for an international growth story may want to consider PagSeguro for their portfolios.

Brazil is the most populous country in South America, with a population of about 209 million, about four times more than the second most populous country on the continent, Colombia. Brazil is also home to the region's largest economy by GDP. Yet for the size of the population and the country, only 68% of the country's adult population has a bank account, according to the World Bank. Those who hold a credit card make up only 32% of the country's adult population, and only 42% of Brazilian consumers used a debit card to make a purchase in 2015.

Despite these limitations, e-commerce in the Latin American country continues to grow. Between 2011 and 2016, e-commerce in Brazil grew at an annualized 18.9% rate but still accounts for only 3.6% of all transactions, less than half the percentage in the U.S. Brazil sports around 122 million internet users who spend about 26 hours per month online. In 2016, 48 million of the internet users made an online purchase, a 22% increase over 2015's total.  As access to mobile networks grows, online access will also increase as a matter of course. As of May 2017, 98% of Brazilians had access to 3G wireless networks and 76% to 4G. Brazil's economic make-up, technological infrastructure, and current trajectory combine to paint a picture of a market where digital and electronic payments are about to explode over the coming years.

With the fertile field of Brazil's market, you would want to see rapid growth from PagSeguro, and when the company reported its second-quarter earnings, that's exactly what investors got. PagSeguro's revenue grew to 1 billion reals ($242 million), a 79.8% increase year-over-year, while net income rose 177% over last year's second-quarter total. This explosive growth in net income was at least partially driven by the company's net margins improving to 22.7%, a 7.9-percentage-point increase over 2017's Q2.

The company's total payment volume (TPV) rose to 16.9 billion reals, a 106.8% increase year over year, primarily due to the 3.5 million merchants using PagSeguro's platform, a 69% increase year-over-year.  The 417,000 merchants PagSeguro added this past quarter was the most it has ever added in a single quarter.

One of the primary ways PagSeguro has achieved such magnificent growth is by increasing the functionality of its platform for both merchants and consumers. For instance, the company recently launched apps letting consumers pay their mobile accounts or other bills from the platform. Another recently launched feature allows merchants to accept payments using a QR code, a particularly attractive feature in a market such as Brazil, because all that is required for a merchant to accept an electronic or digital payment is a smartphone.

[W]e know that by being only a payment solution ... at some point, you cannot differentiate from your competitors. So what we have in mind is to have a more robust digital account where the merchants can come to us. They can have payments and they can also use additional services. Some of the services [that] we launched [are] going to be only for stickiness and some of them [are] going to be to increase our revenues and our bottom line. But none of them is going to hurt our profitability or net income. Even if you think about the bill payment, it is a service that we launched and we make some revenues from that. For every bill that we collect, we receive a flat fee. The Mobile top-up is the same. So it's a way to increase the stickiness and, at the same time, make some money.

With a growing ecosystem and plenty of room for growth in an emerging economic market, it is no wonder PagSeguro is experiencing such explosive growth. The company believes it is only participating in about 3% of its total addressable market, leaving lots of green fields for potential further growth. As the company's stock price has sputtered out of its IPO gate, this might be a time for investors to take advantage by finding a place for this international growth opportunity in their portfolios.