Is the "pot-com" bubble about to pop? That's probably the biggest fear for investors who have already jumped into marijuana stocks or have considered doing so. After all, Tilray's (NASDAQ:TLRY) share price has skyrocketed 270% in just one month. Canopy Growth (NASDAQ:CGC) and Aphria (NASDAQOTH: APHQF) stocks have more than doubled during the same period. Cronos Group (NASDAQ:CRON) isn't too far behind with an 80% gain.

Could marijuana stocks be doomed for a colossal collapse along the lines of what happened with the dot-com bubble in 2001? I think so -- at least for many of the stocks. Here's why a gloomy outlook appears to be warranted. 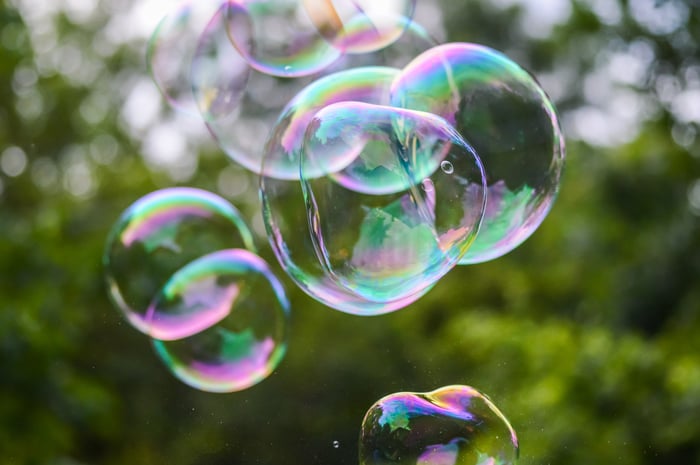 First, it's important to understand just how astronomically high the valuations of marijuana stocks are right now. Based on trailing-12-month revenue, the stocks of the top 10 cannabis growers by market cap have an average price-to-sales (P/S) ratio of 201. Tilray is the most expensive of the group with a P/S ratio close to 318.

The response to criticism about these marijuana stock valuations has been to point to the growth prospects for the companies. And that's the right response. Investors care much more about the future than they do the past. That's especially true for stocks participating in a fast-growing market like the cannabis industry. Because of this rapid growth, it makes sense to look ahead to where marijuana stocks' P/S ratios might be over the next few years.

The best source for cannabis industry projections that I've seen is The State of Legal Marijuana Markets, published by Arcview Market Research and BDS Analytics. I used the growth projections for marijuana markets in Canada and the rest of the world other than the U.S. to calculate a ballpark estimate of what the average P/S ratio for the top 10 marijuana stocks might be in 2022. Here's how this future P/S ratio for the top marijuana stocks compares to the valuations for related industries. 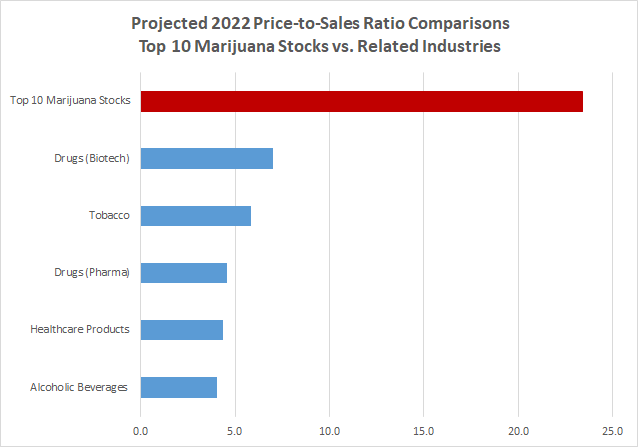 The cannabis industry is similar to each of the other industries shown on the chart in different ways. Including the drug industries for biotech and pharma, as well as the healthcare products industry made sense because the global cannabis market outside of the U.S. and Canada is primarily focused on medical marijuana. However, since recreational marijuana markets share some similarities with the alcoholic beverages and tobacco markets, these industries also were included in the comparison.

Even with tremendous growth in the Canadian and global marijuana markets in the coming years, the top marijuana stocks still are likely to be at least three times more expensive than every other related industry. And that assumes the prices of these stocks stay at current levels.

I do need to mention that the P/S ratios for the various industries come from January 2018 data collected by New York University's Stern School of Business. The P/S metrics for the biotech, pharma, and healthcare products industries are probably somewhat higher now than they were earlier this year. However, the P/S ratios for the alcoholic beverages and tobacco industries likely are lower based on a quick look at several top stocks in each industry.

Is a collapse inevitable?

Based on the projected valuations, I think many marijuana stocks will drop significantly in the not-too-distant future. I don't believe that investors will continue to give the stocks of marijuana growers valuations that are so far out of line with all other comparable industries.

However, there are three scenarios that could change the dynamics for some marijuana stocks. The biggest game changer would be if the U.S. legalizes marijuana at the federal level -- or at least revises federal laws to give autonomy to states when it comes to marijuana legalization.

By 2022, the global marijuana market outside of the U.S. is projected to be roughly $8.6 billion. But if the U.S. was included, that total jumps to $32 billion. The ability to compete in the U.S. cannabis market would provide enough growth potential that marijuana stocks might not look nearly as expensive in comparison to other industries, as the chart showed.

Another possibility is that international marijuana markets grow much more quickly than expected. This, too, isn't out of the question. Even though Arcview Market Research and BDS Analytics think that the United Kingdom will be the second-largest marijuana market outside of North America within a few years, things are moving more quickly than most anticipated in the U.K. It's possible that the market there and in other countries with sizable populations could be bigger than anyone projects right now.

Then there's the potential for massive consolidation among Canadian marijuana growers. Aphria CEO Vic Neufeld has predicted a "squeeze scenario" over the next few years where "the strong will survive, but the weak will not." Clearing the field of a lot of the players currently competing could, at least in theory, prevent the surviving stocks from suffering a collapse.

I think that volatility for marijuana stocks over the next few years could be as sky high as their current valuations. Investors who can't grin and bear it through major swings should stay away from these stocks.

Having said that, the cannabis industry is here to stay. And it's going to be a really large market -- much larger over the next 15 years or so than the 2022 projections from Arcview and BDS Analytics. The companies that are competitive globally and have strong financial positions should be able to prosper over the long run. Close relationships with major companies outside of the cannabis industry, such as Canopy Growth's partnership with Constellation Brands, should be very helpful on these fronts.

Just as some of today's biggest tech winners emerged from the dot-com bubble, I suspect there will be some big winners among the current crop of marijuana stocks. The bad news, though, is that the landscape is likely to be littered by big losers, too.