The biopharmaceutical sector is expected to be one of the most profitable areas for investors over the next decade. Ground-breaking technologies such as next-generation gene-editing systems, artificial intelligence, and machine learning are already being used to tackle an array of high-value chronic diseases, after all.

Not surprisingly, biotech titans Celgene (NASDAQ:CELG) and Biogen (NASDAQ:BIIB) are among the leaders in this ongoing biopharma revolution. So, with that theme in mind, let's attempt to gauge which of these top biotechs is the more attractive long-term buy for investors right now. 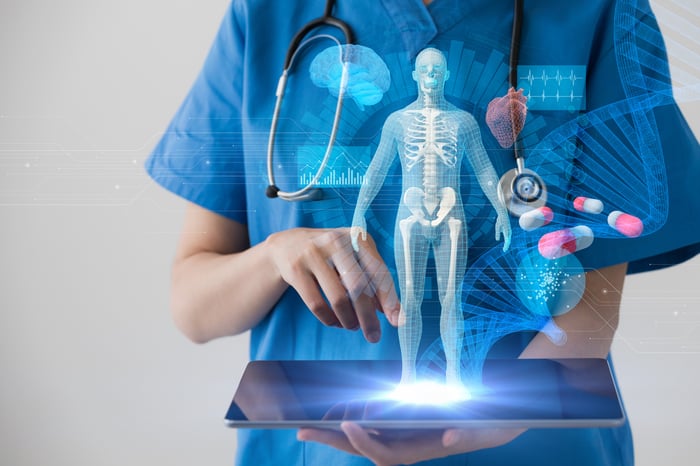 Though Celgene's stock fell to a three-year low this summer, the biotech's underlying business remains extremely strong. For instance, its flagship cancer franchise -- consisting of the triple threat of Abraxane, Pomalyst and Revlimid -- is on track to rake in a staggering $13.5 billion in revenue this year. Moreover, its emerging anti-inflammatory segment -- headlined by the plaque psoriasis treatment Otezla -- is expected to contribute a healthy $1.5 billion to its total annual revenues in 2018.

These two key business segments are expected to boost the biotech's top line by a noteworthy 11.5% in 2019, and keep revenues growing by double-digit percentages for at least the next five years. To achieve that, Celgene plans on bringing a whopping five new blockbusters -- drugs with sales topping $1 billion per year -- to market within the next 12 to 18 months.

Turning to the specifics, the biotech's hematology-oncology franchise is on course to turn in regulatory filings for luspatercept, fedratinib, and the cell-therapies liso-cel and bb2121 -- all before 2020. Celgene is also working toward resubmitting ozanimod's FDA application for relapsing multiple sclerosis in early 2019. That's key because ozanimod is widely expected to garner a sizable chunk of its multibillion-dollar market.

The one downside for this biotech, though, is that it doesn't have a particularly great balance sheet -- at least not compared to some of its closest peers. At the end of the second quarter, for instance, Celgene had a mere $3.4 billion in cash and cash equivalents, thanks to its super-aggressive business development strategy and its enthusiastic share repurchase program.

As such, the company may have to take on more debt if it chooses to pursue additional opportunities in the near-term. That's a serious problem, as it already sports an enormous debt-to-equity ratio of 620. Put simply, Celgene can ill-afford a major clinical or regulatory setback right now.

Biogen is in the midst of a major portfolio churn. Sales in its industry-leading multiple sclerosis franchise have started to slow down in a big way, thanks to a slew of new competing treatments.

On the bright side, Biogen and its partner Ionis Pharmaceuticals (NASDAQ: IONS) have had stunning success with their relatively new spinal muscular atrophy medicine Spinraza. But even with this red-hot drug under its umbrella, the biotech's top line is still expected to fall dramatically next year. Spinraza also face a significant competitive threat from Novartis' experimental gene therapy AVXS-101, although Biogen doesn't seem to think that novel treatment will become a showstopper until well after 2020.

One of Biogen's key problems is that it has taken an ultra-conservative approach to business development, making its pipeline overly reliant on high-risk assets such as the Alzheimer's disease candidate aducanumab. If Biogen's bet on Alzheimer's pays off, it should transform the company into one of the fastest-growing biotechs. But this high-value indication is well-known for being a tough nut to crack: From 2002 to 2012, 99.6% of experimental Alzheimer's drugs failed in clinical trials.

On the plus side of the ledger, Biogen's conservative approach to pipeline development has kept it from taking on too much debt. As things stand now, its debt-to-equity ratio of 48 is one of the lowest among large-cap biotechs. So, if the company does come up snake eyes in Alzheimer's disease, it should have the financial capacity to buy revenue through a bolt-on acquisition.

While both of these top biotechs could produce stellar returns on capital over the long term, Celgene comes off as the more attractive buy at the moment. It has a far deeper pipeline than Biogen, giving it a much better shot at bringing multiple new growth products to market in the coming decade. Of course, that could change in the blink of an eye if Biogen decides to go on a shopping spree. But Celgene is unquestionably ahead of Biogen in terms of pipeline development at this stage.