Please ensure Javascript is enabled for purposes of website accessibility
Log In Help Join The Motley Fool
Free Article Join Over 1 Million Premium Members And Get More In-Depth Stock Guidance and Research
By Rich Duprey - Sep 17, 2018 at 9:33AM

A new R&D facility dedicated solely to electric vehicles signals that the motorcycle company is serious.

Arguably the most remarkable item contained in the Harley-Davidson (HOG -6.92%) roadmap for the future published at the end of July was the number and type of electric vehicles it plans to produce.

Not only did More Roads to Harley-Davidson highlight the much-touted LiveWire electric motorcycle scheduled for release next year, but it also showcased four other vehicles due by 2022, albeit all concept in nature, that even include electric-assisted bicycles -- bikes (literally) that require you to pedal but with the effort helped along by battery power.

And to show just how committed the motorcycle maker is to an electrified future, it just announced it was opening a new research-and-development facility in Silicon Valley that will initially focus exclusively on electric vehicle technologies such as batteries, electronics, and EV design.

You have to admit it's a dramatic evolution for a motorcycle company that built its business and reputation on gears, grease, oil, and gas. 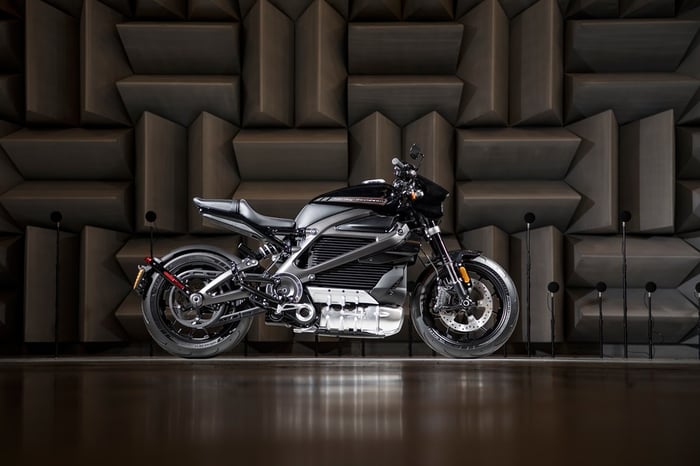 The focus on a portfolio of electrified motorcycles and bicycles is part of Harley-Davidson's strategic vision to attract more riders to the brand. It has said that over the next 10 years, it wants to bring in two million new riders, build 100 new models, and grow its international business to half of its total sales volume. The new electrics should help all three.

Although new smaller-engine-displacement models of less than 500 cubic centimeters, targeted for foreign markets, will garner the lion's share of Harley-Davidson's $225 million to $275 million capital investment plan through 2022, electric vehicles are expected to receive a good chunk as well.

E-bikes are growing in popularity around the world, mostly in China, where tens of millions are sold annually, but also increasingly in Europe. The market analysts at Navigant forecast global e-bike sales are expected to grow to $24.4 billion by 2025, a 55% rise from the $15.7 billion in revenue seen in 2016.

North American growth will be much less than elsewhere in the world, but with 16 million regular bicycles sold annually, in-country growth is seen as having big potential.

Not much spark in electric motorcycles

Still, that's potentially a problem for Harley-Davidson as it tries to force a market here. Fewer than 1,000 high-power electric motorcycles like the LiveWire were sold in North America and Europe last year, and just 5,000 to 6,000 mid-power bikes were sold. While 1.8 million lightweight urban bikes were sold, they also have the slowest growth rate. There's nothing to suggest buyers will turn to Harley-Davidson for their electric vehicle needs when they're already being serviced by existing manufacturers who have substantial experience in the space and more credibility in being enviro-friendly.

Harley did partner with electric dirt bike manufacturer Alta Motors earlier this year, taking an equity stake in the company, but rumors recently surfaced that the two have all but parted ways in recent weeks.

Industry site Asphalt & Rubber says it's learned that rather than co-producing two electric motorcycles under the Harley brand, Alta Motors will develop the next generation of its well-regarded Redshift brand on its own, or perhaps with a new partner. A&R also speculated Harley could go it alone as well, writing, "Developing its own electric technology, its own models, and its own foreign infrastructure and dealerships abroad, this could be just the start of Harley-Davidson investing in a more solid future, as it quietly sunsets its baby-boomer centric business plan over the next five to ten years."

With the announcement of a new R&D center in Silicon Valley for which it is now actively hiring, it could very well mean the motorcycle giant has a new vision of its electric future. Harley-Davidson is certainly proving it is committed to electric vehicles and willing to make a radical departure from its past, but whether that is what it actually needs to recharge sales is something investors can only wait and see.