Earlier this year, Walmart (NYSE:WMT) escalated its battle with Amazon.com (NASDAQ:AMZN) by purchasing a majority stake in Flipkart, one of India's leading online retailers, for $16 billion. This was an important acquisition for Walmart. If Amazon had succeeded in its bid for the e-commerce portal, it would effectively have controlled about 80% of the country's fast-growing online sales.

In typical Amazon fashion, the company struck back in a move designed to give it a bigger presence in this rapidly expanding market. Amazon, together with Indian private equity firm Samara Capital, has acquired More -- one of India's most well-known supermarket chains -- for 42 billion rupees (about $581 million, at current exchange rates), according to a report by CNBC18 in India, citing a press release from seller Aditya Birla Group. Neither Amazon nor Samara Capital have commented on the report. 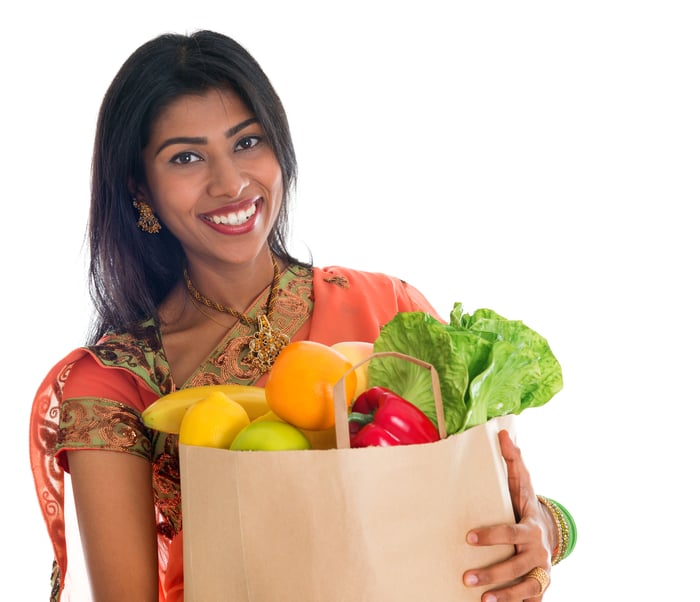 The More retail chain consists of 523 More supermarkets and 20 More megastore hypermarkets, making it one of the largest supermarket chains in India. In July, reports surfaced that Samara Capital planned to take the floundering retailer private for about $626 million. More grew its revenue by 20% to $610.46 million in 2017, but it reported a loss of $93.79 million.

Amazon will reportedly be taking a 49% stake in More, while Samara Capital controls the remainder. The joint venture was necessary to comply with India's regulations that allow foreign companies to own up to 51% of local retail operations once they have received government approval.

The move into brick-and-mortar grocery stores is an increasing part of Amazon's growth strategy, as evidenced by its $13.7 billion acquisition of Whole Foods last year. Several developments over the past year have given some insight into how Amazon plans to use its growing physical retail empire to promote the rest of its ecosystem. Similar to those found in its bookstores, the company added displays in Whole Foods that feature its Alexa-powered devices, including its Echo smart speaker. The company also instituted pickup and returns of Amazon packages in stores, began offering two-hour grocery delivery from Whole Foods, and started providing discounts to Prime members shopping at the retailer.

Earlier this year, Amazon rebranded and expanded its existing online grocery business in India as Prime Now. The service offers Prime subscribers same-day, two-hour delivery of a number of products, such as electronics and small appliances, as well as groceries and other consumable products.

These moves are further evidence of India's place as the latest e-commerce battleground, pitting Amazon against Walmart-owned e-commerce platform Flipkart and BigBasket, India's largest online food and grocery store. Recent metrics show why retailers are keen to capitalize on the increasing opportunity in the country that hosts the world's second-largest population.

India has the world's fastest-growing major economy, up 7% last year, while the global economy grew at just 2.9%. India is also expected to be the world's third-largest economy by 2027, surpassing Japan. That growth is supported by the country's 1.3 billion consumers, and its middle class is expanding at one of the fastest rates worldwide. Another advantage is the country's young and tech-savvy population --  two-thirds of the country's residents are under the age of 35.

Those factors mean that India will be one of the key consumer markets going forward, and Amazon just expanded its foothold there in a big way.