Please ensure Javascript is enabled for purposes of website accessibility
Log In Help Join The Motley Fool
Free Article Join Over 1 Million Premium Members And Get More In-Depth Stock Guidance and Research
By John Ballard – Sep 21, 2018 at 6:00AM

Shares of semiconductor stocks have outperformed the broader market over the last three years, as chip companies have found new avenues through which to apply core processing technology to a broad range of new industries. Himax Technologies (HIMX 1.65%) and NVIDIA (NVDA 0.32%) are two companies that are benefiting from this trend.

Himax makes touchscreen controllers and display drivers for TVs, tablets, mobile devices, as well as car navigation. It's currently investing heavily to ramp up new technologies like 3D sensing, which management believes is about to accelerate over the next few years across the smartphone market and a range of other applications.

NVIDIA controls an over 60% share of discrete graphics processing units (GPUs). Its GeForce line of GPUs is a favorite brand among PC gamers. Lately, NVIDIA has experienced booming demand for its chips in the data center market, and it also has a promising future supplying its DRIVE AGX computing platform for self-driving cars.

Let's compare both companies across several key areas to determine which stock is the better buy for investors today. 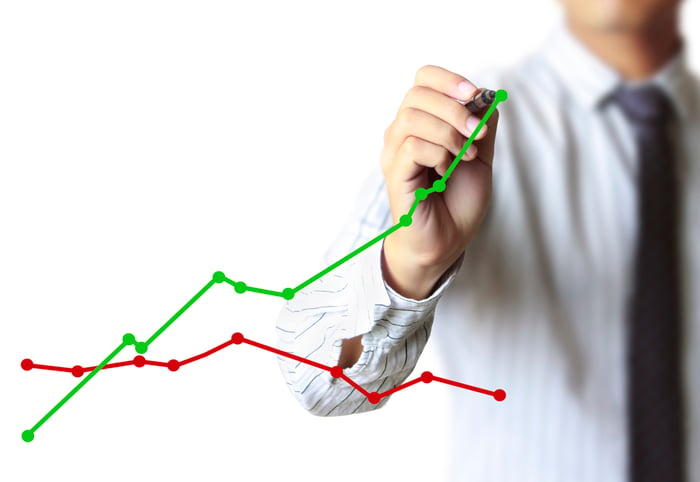 Which has the stronger balance sheet?

Himax is a much smaller company with a market cap of $1.06 billion, whereas NVIDIA's market cap is $168 billion. While NVIDIA has four times as much cash as debt, Himax is the opposite, with more debt than cash. NVIDIA is clearly in a much stronger financial position, as you can see in this table.

Which is growing faster?

Himax's revenue grew 19.5% year over year in the second quarter driven by strong demand for its display drivers used in 4K TVs and smartphones. Net profit was $1.4 million, an improvement over the year-ago loss of $1 million.

However, Himax generated less revenue over the last year than it did in 2008, which shows how cyclical its business is and why its future will depend on non-driver products like 3D sensing.

Himax kicked off its leadership role in 3D sensing when Apple featured the technology in last year's debut of the iPhone X. That's just the beginning of this breakthrough technology as Himax is set to roll this out to Android phones (which is a much larger market than iPhone) over the next year. Management believes its 3D sensing technology will have a "broad range of applications that go beyond smartphones such as Internet of Things, automotive, augmented and virtual reality, and robotics." As such, analysts expect Himax's revenue and earnings to accelerate through next year.

As for NVIDIA, soaring demand for GPUs in gaming and data center sent revenue up 40% year over year in the recent quarter, while earnings climbed 92%. The company saw growth across every market, including artificial intelligence applications and self-driving cars.

NVIDIA's revenue has more than doubled over the last five years. Earnings have climbed even faster as a result of increasing selling prices for GPUs and sound cost control, which has pushed margins higher.

Himax could really get the ball rolling over the next few years, but for now, the numbers don't lie.

Which stock is cheaper?

This is a close call. Both stocks currently trade for about the same trailing P/E ratio (as shown in the table below). NVIDIA is a tad more expensive on a forward-looking basis, trading at 34 times expected earnings, as compared to Himax's forward multiple of 31 times. Despite Himax's lack of growth historically, investors are clearly expecting both companies to post strong growth going forward, which explains the high valuations.

Himax looks cheaper, but when we consider growth, NVIDIA has a much lower PEG ratio, giving the graphics specialist the edge.

Himax currently sports a dividend yield of 1.64%, while NVIDIA's yield is 0.22% since the stock price has rapidly risen in recent years. 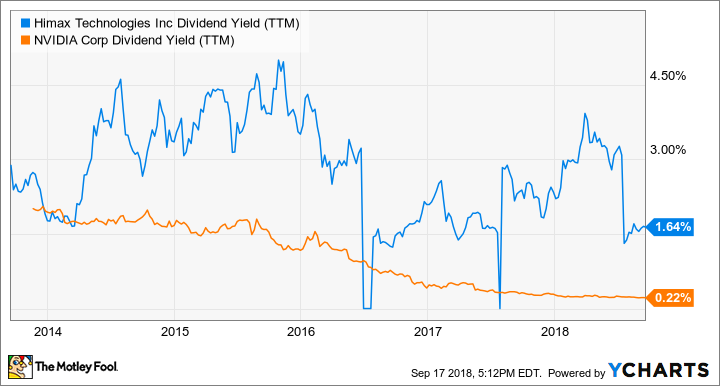 As for the payout ratio, Himax paid out 61.7% of last year's profit in dividends this year. (Note: Himax pays out an annual dividend, as opposed to quarterly like NVIDIA.) Management determines each year how much to pay out based on the prior year's profit.

On the other side, NVIDIA currently pays out only 8.61% of its annual earnings in dividends. Himax is paying a higher yield, but its annual dividend has fluctuated with earnings, whereas NVIDIA has a more consistent record of earnings growth. Plus, NVIDIA's low payout ratio provides management with a lot of wiggle room to increase the dividend in the future.

This one is a toss-up, because it's a question of whether an investor is looking for dividend growth (NVIDIA) or a higher amount of up-front income (Himax).

NVIDIA is the safer choice for investors today. Himax has some promising technology, but it's difficult for me to pick a stock that has failed to deliver consistent growth. NVIDIA has been delivering the goods, and it still has room to grow, given that the market for data-center GPU accelerators is expected to grow 50% per year through 2023 to reach $21.2 billion, according to research from MarketsandMarkets.

Considering all of this, NVIDIA is the clear winner.