The out-of-favor hotel listings site comes through with its biggest quarterly gain as a public company. A private stock sale helped trigger the rally.

It didn't take much for Trivago (TRVG 0.00%) investors to be treated to the biggest weekly gain in the travel website operator's brief but rough life as a publicly traded company. Trivago stock soared 26% last week, after PAR Investment Partners boosted its position in Trivago.

The Boston-based private equity firm added to its position by buying 7 million shares in a private transaction last week. PAR Investment paid $4.47 per share to buy the shares from Trivago's selling founders and former managing directors. It's a great deal for PAR. The shares closed out the week trading 35% higher than the private transaction price that settled just four days earlier. Whether the market sees this as the passing of selling pressure or sensing that PAR may now turn up the heat on the activism front, last week's pop makes it clear that the market likes the deal. 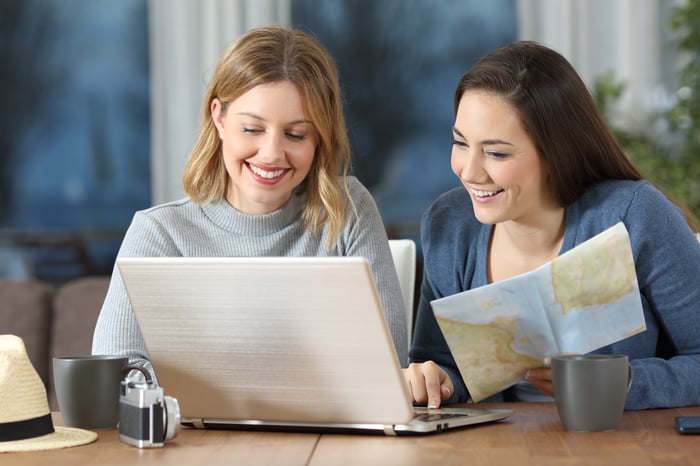 Trivago's been public for nearly two years, and it may be a surprise to some that it's never had a bigger weekly performance than last week's 25.7% surge. Trivago's had a couple of weeks where it approached a 20% pop, but it never crossed north of that mark. Even Trivago's IPO in late 2016 was a bit of a dud, with the stock rising less than 8% on its first day of trading.

The uninspired trading in the past has been warranted. The lodging metasearch specialist had been seeing decelerating revenue growth and notched year-over-year declines in revenue in its two most recent quarters. In its latest quarter, Revenue took a 21% hit as double-digit percentage declines in qualified referrals and revenue per referral compounded the misfortune. Trivago's loss also widened.

The brutal second quarter saw the stock hitting an all-time low in late July. The stock has soared 50% since that low, though it's still trading for just a little more than half of its IPO price.

Investors will want to figure out PAR Investment Partners' intention, but last week's big share purchase is a good sign. We were already seeing at least one sign of a potential turnaround in this summer's otherwise dreary financial update: Trivago's return on advertising spend improved sequentially, a big deal since its two largest advertisers have been paring back their bids for leads. Last week's move set the stage for activism or stability, and at this point either option is preferable to the status quo.

Editor's note: This article has been republished to correct and clarify information about PAR's stake and Trivago's revenue trend.