Intrexon wants to make it easier for companies to create products that are high in cannabinoids.

Do Intrexon's pot plans make it a stock to buy? 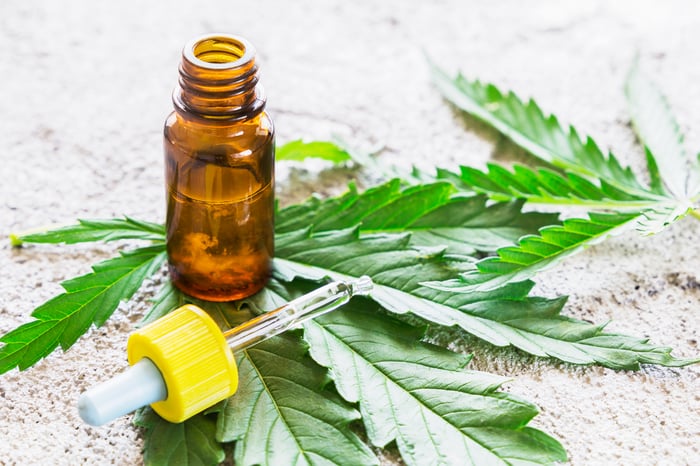 The success of the recreational marijuana markets that have been up and running longest is significant. For example, Colorado's marijuana sales were $1.5 billion in 2017, and since its market opened for business in 2014, the state has generated tax revenue on total sales of more than $5.3 billion.

The U.S. market, however, remains hamstrung by laws prohibiting marijuana at the national level. It's still a Schedule 1 controlled substance in the U.S., so cannabis companies have limited access to tax benefits and banking services.

That's only scratching the surface of the global opportunity, though. The worldwide pot market, including the black market, is valued at an eye-popping $150 billion by the United Nations.

A new way to create cannabinoids

Cannabinoids are the naturally occurring chemicals in cannabis plants. The most common cannabinoids are tetrahydrocannabinol (THC), which is responsible for marijuana's euphoric effects, and cannabidiol (CBD), which has garnered a lot of attention for its ability to control seizures in epilepsy patients.

In many respects, creating consumer products that are high in THC or CBD represents the most attractive opportunity for marijuana companies.

Finished goods, such as cannabis oils, can be differentiated by brand, allowing companies to charge premium prices. And since cannabis is a source material for finished goods, any drop in cannabis commodity prices because of oversupply can benefit cannabis companies manufacturing finished products by improving their profit margins.

Extracting cannabinoids requires more effort than selling dried flower, though. So companies, including Intrexon, are looking for easier ways to create cannabinoids that can be used in products. Specifically, Intrexon is researching a process that creates cannabinoids using engineered yeast rather than the cannabis plant. If they're successful, then they could theoretically provide extract to the makers of finished marijuana products more cheaply.

Intrexon isn't alone in thinking yeast can be used this way. As fellow Motley Fool Keith Speights has pointed out, Cronos (CRON 0.00%) is working on a similar approach with Ginkgo Bioworks. Also, Hyasynth reported it had fermented yeast to produce cannabinoids in 2016, and earlier this month, Organigram invested $10 million in it to work together on the approach. Additionally, German researchers have been working on the approach since they first reported an ability for yeast to produce THC in 2015.

Clearly, Intrexon has some competition in this area.

The question here doesn't appear to be "Can it be done?" but more specifically "Can it be done at scale?" Despite the complexity, extraction techniques are proven and increasingly efficient. For this approach to unseat traditional extraction, companies will need to demonstrate that they can make enough commercial- and industrial-grade cannabinoids to meet demand at a lower cost than existing methods. That's not going to happen anytime soon. According to Intrexon, it could be years before this approach is commercialized, and for that reason, it might be best to focus on other marijuana investments.