Triton shares fell as much as 13% in early trading before rallying to close down "only" 10.9%. Seaspan fell by 10% before bouncing back to close down 3.2%. Costamare closed down 5.5%, after having fallen twice as far earlier in the day. 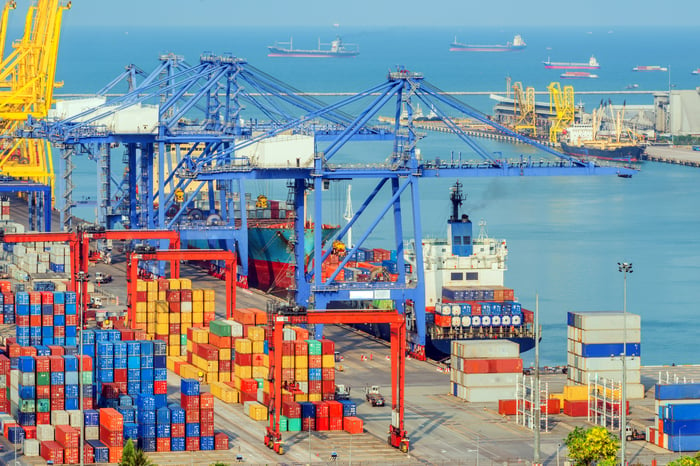 Why the sudden sell-off, and why did investors later relent on -- well, on at least two of these stocks? The first question is by far the easier to answer.

Seaspan owns, charters, and manages container ships, as does Costamare. Triton buys, leases, and sells "various types of intermodal transportation equipment" to shippers. Each company, therefore, has a strong connection to the shipping industry. Unfortunately for them, Wells Fargo worries that the trade war between the Trump Administration and much of the rest of the world is not going to be good news for the container shipping business. At the same time, new International Maritime Organization regulations restricting the use of high-sulfur diesel fuel in cargo vessels are expected to raise the cost of shipping and ding profits across the industry.

What's curious about the market's reaction to Wells Fargo's report is this: Of the three stocks named above that Wells downgraded, it actually only attached an underperform (i.e., sell) rating to one of them -- and that one was Seaspan, which by day's end had suffered the smallest loss of all.

In contrast, Wells Fargo only downgraded Triton and Costamare to market perform (hold), yet both those stocks suffered worse than Seaspan did. (A fourth company in the industry, Textainer Group, also was tagged underperform by Wells. But its 5.2% loss for the day was about the same as Costamare's.)

Considering that when all is said and done, Wells Fargo's downgrade didn't unveil any truly new information (we've all heard plenty about tariffs and trade wars these past few months), I think I can see why investors eventually got over their panic, and began buying back these shares before close of trading.

As for why Triton in particular still ended the day down more than 10%, but no one else did, I honestly don't see the logic behind that one.