Please ensure Javascript is enabled for purposes of website accessibility
Log In Help Join The Motley Fool
Free Article Join Over 1 Million Premium Members And Get More In-Depth Stock Guidance and Research
By Travis Hoium - Sep 30, 2018 at 6:33AM

GE is in a perfect position to acquire its way to renewable energy dominance.

General Electric (GE 2.37%) is facing a number of challenges, but its biggest may be turning around an energy business that can't seem to overcome a slowing fossil fuel power generation market. The $35 billion power business, which includes building and maintaining fossil fuel power plants, shrunk 19% in the second quarter of 2018 to $7.6 billion in revenue and net income plunged 58% to $421 million. 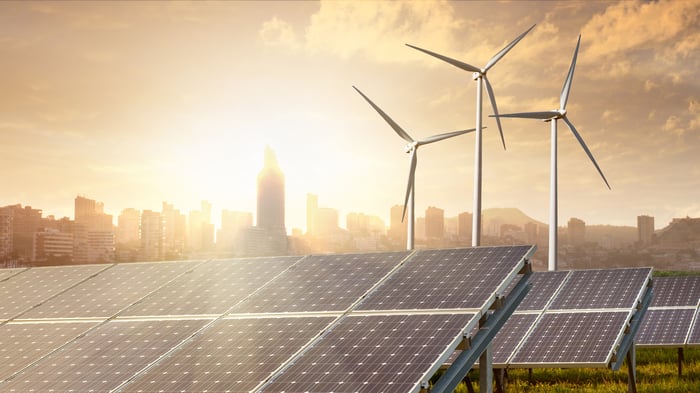 Why renewable energy assets work together

GE already has a large wind energy business, which generates about $9 billion in revenue annually. But wind revenue has stagnated because cost reductions are offsetting any volume growth the industry may have. Wind is growing overall, but that doesn't mean revenue is growing at GE Wind.

To supercharge growth, I think GE should add complementary revenue streams from solar, energy storage, and even EV charging. The easiest way to get into these markets is by acquiring the industry's leaders.

First Solar (FSLR 4.19%) is the industry's leading utility-scale solar panel supplier and its most profitable company long-term, not to mention $2.0 billion of cash sitting on the balance sheet. Buying First Solar would give GE a strong position in utility-scale solar, which is the largest solar market in the U.S. and worldwide.

SunPower (SPWR 4.61%) is a leader in high-efficiency solar panels, which are ideal for residential and commercial solar applications, where space is a constraint. SunPower has faced challenges trying to develop its own solar projects and competing against companies like First Solar in utility-scale projects, but it has strong margins and an improving competitive advantage in high-efficiency solar, which would complement First Solar's business under GE's umbrella.

SolarEdge (SEDG 7.43%) is the part of this trio of companies that doesn't make solar panels. It makes power optimizers, inverters, and energy storage products, which convert direct current electricity from solar panels to the alternating current used in electrical devices. SolarEdge has become a critical control interface for solar customers and a leader in value-add components in solar installations.

The current market cap of First Solar, SunPower, and SolarEdge is $5.2 billion, $1.1 billion, and $1.9 billion, respectively, or $8.2 billion combined. Even if we assume a premium of 30%, the three solar industry leaders could be added to GE for less than $11 billion.

Better than the sum of their parts

GE has had success over the years putting together pieces of a business that others couldn't do under one roof and extracting value from them. Think about the combination of turbines with power plant building and financial services, on which the company built its business for decades.

I think GE can do the same with wind turbines, solar panels, solar components, and inverters. Being able to come into any situation with the lowest-cost option, whether that's wind, solar, or a combination of the two, would be a unique offering and allow GE to play in any market. Owning the key parts of the supply chain would also allow GE to control the design process, rather than installers putting different components together in the field.

No company has built the potential scale and financial muscle GE can bring to the table if all of these renewable energy assets are under one roof. I think acquiring First Solar, SunPower, and SolarEdge would create a renewable energy juggernaut when combined with GE's wind business. That's just what the market needs right now, and it could drive much-needed future growth for GE.