October 2 wasn't a very good day for owners of Stitch Fix (NASDAQ:SFIX). Following the company's fiscal fourth-quarter earnings release after market close the afternoon before, the company's stock took an absolute beating, finishing the day down a painful 35% in very heavy trading.

On the surface, there were a few things that weren't "great" when compared against expectations. The company reported 23% revenue growth and 25% more active accounts than last year's quarter, both down from last year's results and below estimates set by Wall Street analysts who cover the company. Furthermore, it was a step backward from a blowout third quarter that raised expectations even higher as it drove the stock price up over 40% in August alone. 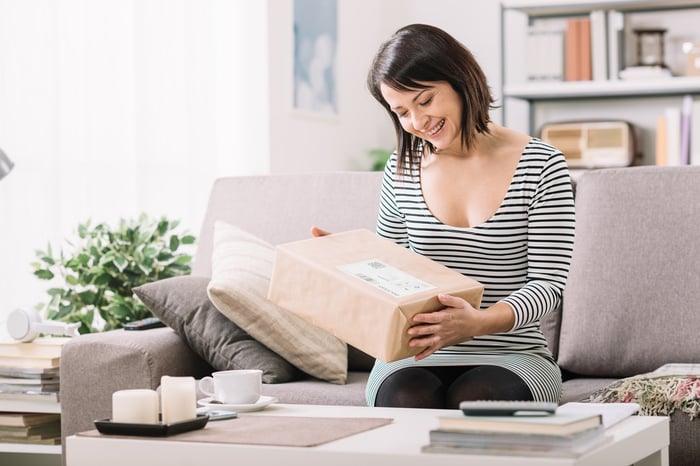 So what happens when you combine high expectations, a recent surge in the stock, and a "disappointing" quarter? In short, it's a pretty good recipe for a stock market beatdown. But that doesn't mean it's time to head for the exits. On the contrary, investors would likely do far better by simply taking a deeper look at the results and what management is doing (and saying they will do next) to learn more about the company. After all, today's sell-off could actually be a buying opportunity for investors with a long-term outlook.

A closer look at some key metrics

While producing 20%-plus growth rates in sales and active clients -- a key measure of customers signed up for regular shipments of custom apparel orders -- is nothing to sniff at, the market's reaction is at least partly due to the deceleration of growth from prior quarters. Stitch Fix's third-quarter sales were up 29%, and its active client count was 30% higher than the year-over-year number.

Furthermore, there were some concerns over the sequential numbers. Sales increased less than $2 million from the fourth quarter to the second, and the active client count of 2.7 million was essentially unchanged.

It's this second measure -- active clients -- that probably most concerned investors. After all, the biggest recent fear for Stitch Fix is that competition, particularly from e-commerce behemoth Amazon.com, would start to erode its competitive advantage and draw clients away. This was the first time it didn't report a sequential increase in active clients since going public.

Unfortunately, this proved to be a bigger concern for investors than Stitch Fix's continued profitability. The company reported strong GAAP earnings after losing money a year ago. Profits also surged sequentially, doubling from the third quarter to the fourth.

How Stitch Fix says it can continue to drive growth

Growing active users is critically important to Stitch Fix's long-term prospects, and management was clear on the earnings call that this is a priority. But leveraging its existing user base is also a critical part of the strategy. Founder and CEO Katrina Lake highlighted this in her prepared remarks on the earnings call, pointing out the early success with the "Style Pass" service:

To date, Style Pass has outperformed the results from our pilot as we continue our disciplined rollout of the program. As of Q4 2018, the number of Style Pass clients grew nearly 60% compared to the prior quarter, Q3 2018. In addition, we have found that Style Pass clients spend more per fix, receive Fixes more frequently, and have higher satisfaction ratings compared to non-Style Pass clients. Services in new initiatives such as Style Pass add flexibility to our offering, allowing us to drive increased client satisfaction, and also serving as a strong catalyst for client reengagement.

Lake further elaborated that since 2014, the company has been able to reengage over 1 million clients with initiatives including Style Pass. The company is also taking steps to expand into new categories, launching Stitch Fix Kids in the fourth quarter, with Lake saying, "To date, we've received strong interest from our existing clients who have signed up their children with early positive feedback on the offering."

Stitch Fix also announced what will be its first big step to expand outside North America. The company says it will enter the United Kingdom market "by the end of" its fiscal year 2019.

Over the past several quarters, Stitch Fix has made improved cash flows and adjusted EBITDA -- earnings before interest, taxes, depreciation & amortization -- a priority. This certainly showed in the fourth quarter and for the full year. Full-year operating cash flows were $72 million, up 89% year over year, while adjusted EBITDA was up more than fourfold in the fourth quarter. For the full year, free cash flow more than doubled, from $21.5 million to $55.6 million.

But looking ahead at fiscal 2019, management is guiding for a big reduction in adjusted EBITDA, from $53.6 million last year to a range between $20 million and $40 million next year. CFO Paul Yee offered more detail on the earnings call:

Our adjusted EBITDA guidance, on the other hand, reflects the people and infrastructure investments we're making to support our international expansion. The investments, combined with the launch of our Kids category, represent the vast majority of the decrease in adjusted EBITDA year over year.

Looking ahead: More competition, but more opportunity, too

There's no doubt that the mash-up of technology, data, and interest from consumers will drive more competition in the multibillion-dollar global apparel industry. And while that will assuredly mean Stitch Fix must work harder to retain customers and gain new ones, competition is a bullish indicator, not a bearish one.

The big question is how effective the company will be at leveraging its growing pool of data on all of its customers, and turning that data into more engaged clients who regularly spend money. Moreover, can it apply its expertise to establish a foothold in new international markets, too?

There were certainly a few things that bear watching closely in the fourth quarter, but the company expects to deliver 20% to 22% sales growth in the first quarter of 2019, and full fiscal year 2019 sales growth between 20% and 25%, with revenues approaching (or potentially surpassing) $1.5 billion.