Less than a month after big data and machine learning specialist Cloudera (NYSE:CLDR) reported earnings that sent its share price galloping higher, Mr. Market is shouting, "Giddyup!" once again -- and for good reason: Yesterday, Cloudera announced it is merging with data management company Hortonworks (NASDAQ:HDP) in a $5.2 billion deal that will form "the industry's first enterprise data cloud from the Edge to AI." 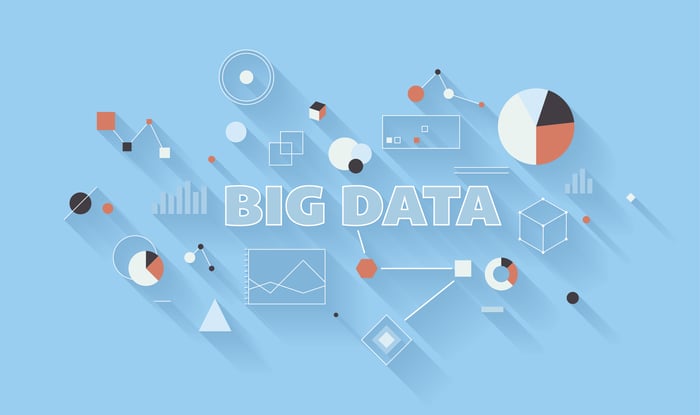 Big data is a complicated concept to grasp. In contrast, this merger is actually pretty straightforward. Image source: Getty Images.

Let's start with the details of the deal. In a joint press release, Cloudera and Hortonworks described their deal as "an all-stock merger of equals" -- but one company is slightly more equal than the other. The new company will be owned 60% by Cloudera shareholders, and only 40% by Hortonworks shareholders. Cloudera will be issuing 1.305 shares of its own stock to trade for every one share of Hortonworks currently owned by the latter's shareholders.

This is why Cloudera is winning the upgrades today -- it's the one that will survive post-merger.

The companies promise that this deal, which they describe as "complementary" (a term probably intended to defuse antimonopoly concerns), will accelerate "innovation in IoT, streaming, data warehouse, hybrid cloud, machine learning/AI." Together, the two firms will have annual revenue of $720 million initially, and expect to begin using that revenue to generate $150 million in positive cash flow in 2020. Helping them to bridge the gap from now to cash flow positivity, Cloudera/Hortonworks will boast a balance sheet brimming with $500 million cash and no debt.

What Wall Street thinks about this merger

Analysts, as I say, are ecstatic. Here's a short summary of some of the comments coming down off the Street today:

DA Davidson, one analyst who upgraded Cloudera stock to buy today (Nomura was the other), argues that as it crunches the numbers, it's not inconceivable that a combined Cloudera/Hortonworks could generate sales of as much as $1.17 billion in 2020, and earn an 18% free cash flow margin on those sales. (More important even than operating cash flow, free cash flow is a measure of a company's cash profits after deducting capital spending requirements. Davidson is thus predicting that Cloudera might generate as much as $210 million in cash profits, turning Cloudera's promise of $150 million cash flow into a lowball estimate.)

Before I answer either of those questions, let's be 100% clear here: Currently, neither Cloudera nor Hortonworks is generating anywhere near the numbers they are promising to generate two years hence. To the contrary, over the past 12 months, the sum total of Cloudera and Hortonworks' operating cash flow has been negative $26.7 million. Their free cash flow is negative $50.1 million -- and for that matter, their combined GAAP profit is a $360.5 million loss.

So before you read any further, if you're considering buying into the merged Cloudera/Hortonworks, you have to take a leap of faith that the numbers they are promising will bear out.

That being said, let's assume that things do work out as planned. Cloudera and Hortonworks say their "combined fully diluted equity value" after the merger will be "$5.2 billion." Capital spending by the two companies is running a bit below $25 million combined right now. Assuming that doesn't go up to much after the merger, therefore, free cash flow might be $125 million ($150 million cash flow minus $25 million capex) in 2020.

Is $5.2 billion too much to pay for $125 million in free cash flow? It works out to a free cash flow multiple of 41.6, which does seem high to me. Still, considering that before this deal was announced, investors were happily paying half that price -- $2.6 billion -- for a Cloudera stock with no free cash flow, I can see how many investors might be pleased with the new valuation, assuming everything works out as planned in 2020.

And if things work out even better than planned -- if Cloudera generates, say, the $210 million in FCF that Davidson is predicting?

Why, then I'd say investors will be downright elated.