Shares of Turkish telecom Turkcell Iletisim Hizmetleri (NYSE:TKC) plummeted 10% to close at $4.42 per share on Thursday -- then proceeded to slide more after-hours. Perhaps worse for investors trying to figure out how to react to this news: There was no obvious reason for the decline. 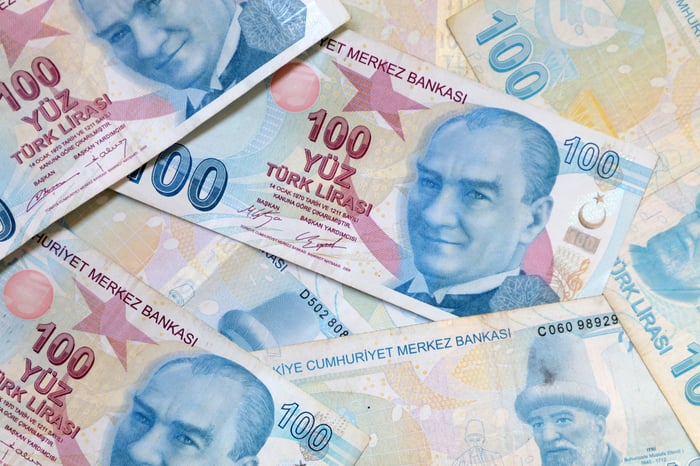 Today's stock slide at Turkcell may have begun with a weakening lira -- but that may not have been the only catalyst. Image source: Getty Images.

Well, actually, there were a couple of items that might have contributed to the slide. For one thing, the Turkish lira, which has been a continuing thorn in Turkey's side these past several weeks, took another turn for the worse on Thursday, devaluing from an exchange rate of 6.05 lira to the USD to as bad as 6.20 lira over the course of the day.

For another, Turkish international news channel TRT World reported today that, apparently fed up with the European Union dragging its heels on accession talks to bring Turkey into the EU, Turkish President Recep Tayyip Erdogan is mulling the possibility of asking his voters to decide whether they really want to be in the EU at all in a referendum.

There aren't a lot of details available on exactly what Erdogan is contemplating -- would a "no" vote in the referendum be binding? When would the vote be held? Even the prospect that Turkey might vote to move further away from Europe, however, may be contributing to investor unease today.

Combined with the weakening lira, that could explain why investors are 10% less enthused about owning Turkcell Iletisim Hizmetleri stock today.