Weight Watchers (NASDAQ:WW) doesn't want you to associate it solely with dieting anymore because consumer concepts about healthy living have evolved to incorporate wellness; fresh, natural ingredients; and a more holistic approach to individual well-being. The weight-loss industry giant now wants to be known by the slimmed-down initials WW, with a new tagline: "Wellness that Works."

President and CEO Mindy Grossman was quoted in a press release as saying, "No matter what your goal is -- to lose weight, eat healthier, move more, develop a positive mind-set, or all of the above -- we will deliver science-based solutions that fit into people's lives." 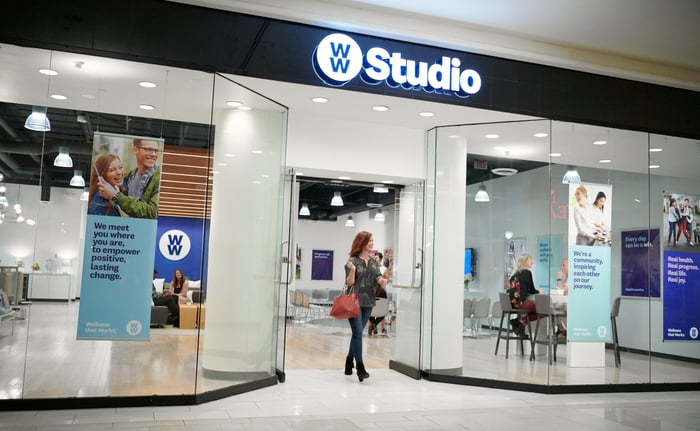 There are a few problems with the change, however, beyond the fact that the new name has twice as many syllables as the old one (making it less easy to say) and the initials apparently don't stand for "Weight Watchers" or even the company's new tagline. In fact, the BBC reported that Grossman couldn't explain what the letters stood for, but said they were simply the company's "marque."

When Yum! Brands transitioned Kentucky Fried Chicken to KFC, it ended up with a streamlined name. Same with Qurate Retail Group (formerly Liberty Interactive) when it changed the Home Shopping Network to HSN. By not claiming the new name is an acronym of the old, WW seems to be trying to bury all connection to "weight" as the phrasing people use switches to be more about "health." (People are still likely going to call it Weight Watchers, though.)

The bigger issue for the brand, though, is that even though it says it is distancing itself from mere weight loss, dieting is still core to its mission. It has not done away with its points-based weight-loss program but merely added or updated other features, such as its system for awarding points for performing activities like walking or doing an intense workout or assigning "wins" if you track your meals or attend a meeting. Wins can be redeemed for products and services.

This all ought to be seen as a positive development, since the company is trying to reach people regardless of how they're approaching wellness. But because the branding changes are in response to groups advocating for body positivity, the shift is being criticized as merely cloaking a weight-loss program in the language of wellness.

A slim chance at growth

Obesity remains an expensive problem in this country. The CDC says 40% of the U.S. population is obese, and that obesity costs $147 billion annually in medical costs. Body Mass Index -- which is a person's weight in kilograms divided by the square of their  height in meters -- is used by the CDC to define obesity. Dieting might not be the ideal method of weight loss, and it has fallen out of favor among many because of its failures, but encouraging healthy behaviors is a good thing. And there's a huge opportunity to sell to those who want to be healthy, those who want to lose weight, and those who want to do both.

WW has positioned itself with a foot in both the wellness and the weight-loss camp, trying to make its programs resonate with those seeking health rather weight loss and still encouraging people to diet and use its programs to do so. By trying to please everyone, it might satisfy no one.

Revenues at Weight Watchers rose 28% last quarter as it added 1 million new members, leading it to raise guidance for the year. Although its stock is 63% higher than where it started in 2018, shares are trading 32% below where they stood before Weight Watchers issued its earnings report.

That's due in part to concern that growth could soon plateau and likely helps explain why Weight Watchers is undertaking this metamorphosis. Although it has been slowly reimagining itself for some time as an organization that's more than simply a diet, the new change carries risks beyond antagonizing critics. Changing its name and disavowing its association with Weight Watchers ruins decades' worth of brand building in exchange for generic messaging that might have little practical positive impact on membership growth and financial performance.