The U.S. Navy analog to the Air Force's larger AWACS (airborne warning and control system) aircraft, Northrop's Hawkeye serves as a flying "quarterback" for the air squadrons it leads, warning them of approaching threats, and dispatching fighters and bombers to attack targets in combat.

But it's not just the U.S. Navy that uses Hawkeyes -- several U.S. allies fly the plane as well. Japan is the most active user outside the U.S., including 13 Hawkeyes in its Air Self-Defense Force already. And as we learned earlier this month, Japan is set to grow its fleet of these "mini-AWACS" significantly over the next few years. According to a Defense Security Cooperation Agency (DSCA) notification to Congress, Japan intends to purchase "up to nine (9) E-2D Advanced Hawkeye (AHE) Airborne Early Warning and Control (AEW&C) aircraft," along with the spare engines, installed radio, radar, GPS, and other equipment needed to outfit them fully and keep them flying consistently. 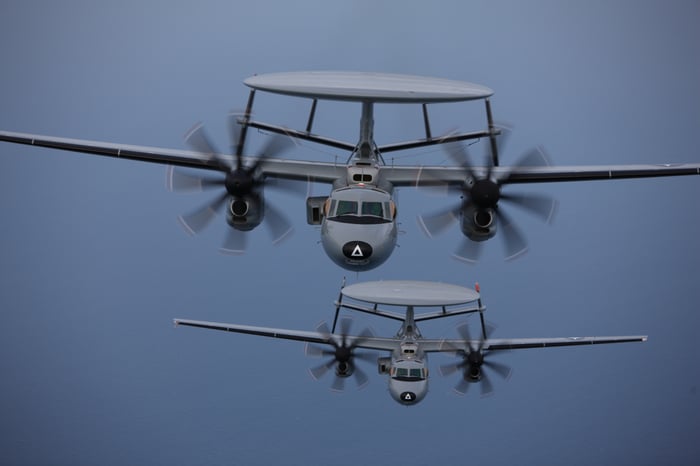 But what does it mean to Northrop Grumman stock?

Northrop's aerospace systems division is the company's largest by revenue -- and it's growing in importance with wins such as this Advanced Hawkeye contract and, even more important, the B-21 bomber contract that it won in 2015. Although much of the focus on Northrop Grumman as a stock lately has revolved around the company's acquisition of Orbital ATK and the effort to become a major player in space, the truth is, with only $400 million in revenue last quarter, "innovation systems" (Northrop's new name for its space division) remains essentially a bit player.

This is why the sale of Advanced Hawkeye aircraft to Japan may not be as big a deal as first meets the eye. Certainly, 10.5% of $3.135 billion in sales will earn a pretty penny for Northrop -- about $329 million once the planes have been delivered. On one hand, success in selling Hawkeyes is illustrative of a broader trend at Northrop. On the other hand, the company has halted and reversed its decline in sales. Total revenue at the company is up 8% over the past three years in fact.

What's easy to miss here, though, is the fact that within the overall sales number, sales of lower-margin aerospace products are growing much faster than sales of higher-margin Mission Systems products. Specifically, from 2014 to 2017, aerospace sales surged more than 20%, while mission systems sales grew just 3.5%.

This trend is continuing in 2018. Over the last two quarters, aerospace sales surged 10% year over year in Q1, then 11% in Q2. Northrop's more profitable mission systems division, however, saw sales eke out only a 3% gain in Q1 -- and less than 1% growth in Q2.