Shares of Ford Motor (NYSE:F) have been battered in recent years, as a bloated cost structure and suboptimal product portfolio led to underwhelming sales and earnings results. Ford stock recently fell to yet another multiyear low after the company reported a double-digit sales decline in the U.S. for the month of September.

In fact, Fiat Chrysler (NYSE:FCAU) surpassed Ford to take the No. 2 sales spot in the U.S. auto industry last month. Yet September was an atypical month for the industry, and Fiat Chrysler is doing unusually well right now thanks to the strength of the Jeep brand. In context, Ford's September and third-quarter sales results look quite solid.

As usual, cars were the weakest part of Ford's vehicle lineup, with sales plummeting more than 25% last month. Sales declines for the Focus and C-MAX models (which have gone out of production for the U.S. market) contributed to the sales weakness. But the Fiesta, Fusion, and Taurus models all posted steep sales declines as well. 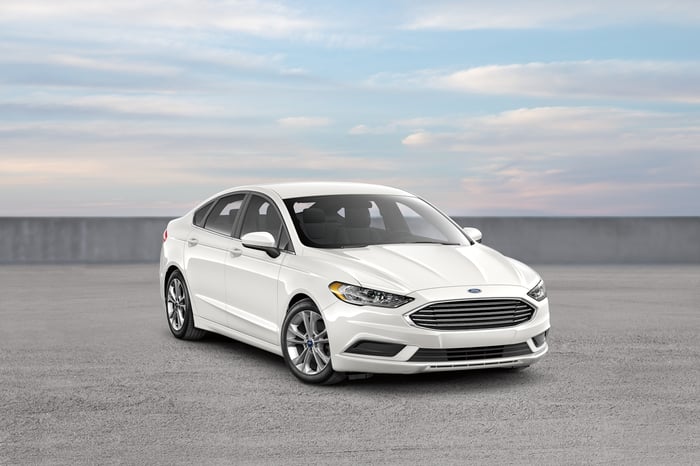 Sedans like the Ford Fusion have fallen out of favor in recent years. Image source: Ford Motor Company.

By contrast, crossover and SUV sales held up quite well in September, slipping just 2.7% year over year. Ford's results in the truck market came in somewhere in between, with deliveries falling 9.9% last month.

A tale of two hurricanes

A year ago, Ford got a big sales bump in the Houston area during September, driven by pent-up demand triggered by Hurricane Harvey, which brought widespread flooding to the area in August 2017. This created a very tough year-over-year comparison for Ford. Indeed, sales in the Houston region dropped by 44% last month, accounting for about a third of the company's September sales decline.

By contrast, during September 2018, Hurricane Florence swept through the Carolinas. Florence didn't cause the same level of devastation as Hurricane Harvey did last year, but it still depressed sales in the affected areas last month.

Tight supply of F-150 trucks also likely contributed to Ford's September sales slowdown. Ford's truck inventory is currently down by more than 30,000 units year over year and well below historical averages. This reflects the lingering effect of a fire at a supplier factory in May.

Fiat Chrysler did post much better results last month despite facing many of the same headwinds as its rivals in the U.S. market. Total deliveries surged 14.7% year over year to 199,819 units, surpassing Ford.

The Jeep brand continued to be the star for Fiat Chrysler, with sales up 14.1% last month. Jeep now represents 42% of the company's mix in the United States. Ram pickup sales rose 10%, helped by supply constraints that are limiting production of other automakers' full-size pickups. And the Dodge brand posted a surprising 40.6% surge in September, as sales of the Caravan minivan more than quadrupled year over year.

Fiat Chrysler's level of outperformance last month was unusual. However, it has been gaining market share all year, with year-to-date U.S. deliveries up 6.4% in a down market.

Adjusting for some of the unusual factors that impacted sales last month, Ford's performance seems satisfactory. For example, sales were down just 3.4% compared with September 2016. This comparison to two years ago eliminates the distortion caused by Hurricane Harvey in 2017. Ford also pulled back on incentive spending last month, which contributed to the sales drop.

And looking at the third quarter as a whole, Ford's U.S. deliveries slipped just 3.5% year over year. This compares very favorably with General Motors' 11.1% sales decline during the same period.

Considering that several of Ford's top-selling models are nearing the end of their lives, some level of sales weakness is to be expected. As Ford rolls out highly anticipated new models like the Ranger midsize pickup and Bronco SUV along with all-new versions of popular nameplates like Escape and Explorer over the next year, sales and earnings should rebound swiftly.