Ford Motor Company (NYSE:F) will report its second-quarter earnings results after the U.S. markets close on Wednesday, July 25. Here's a look at what to watch for when the Blue Oval reports.

Wall Street analysts polled by Thomson Reuters expect Ford to report earnings of $0.34 per share, on average, down from $0.56 per share in the second quarter of 2017. They also expect Ford's automotive-segment revenue to drop to $36.2 billion from $37.1 billion in the year-ago period. 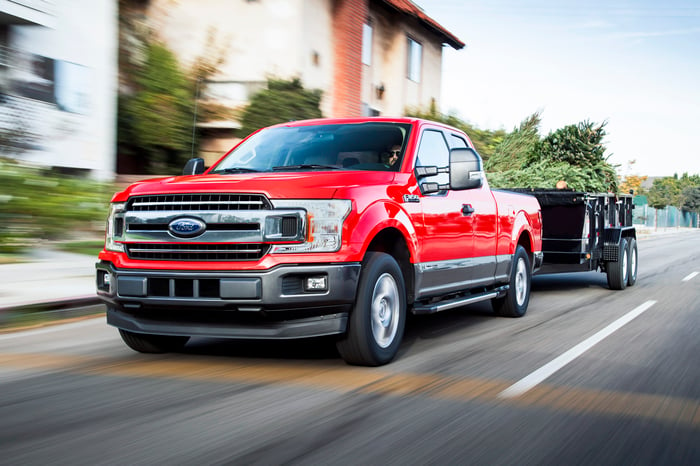 As is so often the case, the F-150 will be a key part of Ford's earnings story in the second quarter. Image source: Ford Motor Company.

How did Ford's sales fare in the second quarter?

Ford does business in over 100 countries, but the U.S., China, and the 20 countries that make up western and central Europe, what Ford calls the "Euro 20," account for the vast majority of its global sales. Results from the three were decidedly mixed in the second quarter.

Ford lost about a week's production of several truck models, including the huge-selling F-150, after a fire at a key supplier's factory on May 2 caused a shortage of essential parts. That was good news, in context: The factory was severely damaged, and initial estimates were considerably worse.

Ample dealer inventories meant that Ford's truck sales didn't take much of a hit from the lost production, and the company expressed confidence that it will be able to make up most or all of the production it lost in the second half of the year. But because Ford, like most automakers, books revenue when vehicles are shipped, its second-quarter revenue and profit will be affected.

After Ford was able to restart production of the trucks, it said the impact of the lost truck production on its second-quarter earnings will be between $0.12 and $0.14 per share. But because it expects to make up the lost production later in the year, it stood by its full-year earnings guidance.

The upshot: Expect a subdued result, but a brighter outlook

Ford often beats Wall Street estimates by a penny or two, but I'm not sure that will happen this time around. Between the lost truck production and ongoing pressure from higher commodity prices, I think Ford will be doing well to match Wall Street's estimate of $0.34 per share.

That said, note that Ford is standing by its full-year earnings guidance of $1.45 to $1.70 per share. A dent in its second-quarter result won't be a big deal in the long run if its sets up a better-than-expected second half. We'll know more after Ford reports on Wednesday afternoon.