In just over five years, from January 1995 to April 2000, at the height of the tech bubble, Cisco Systems, Inc. (NASDAQ:CSCO) shot up an incredible 3,840%, and briefly became the most valuable company by market cap in the world. During that incredible market run, many inexperienced investors, consumed by FOMO, the "fear of missing out," became paper millionaires. Unfortunately, many learned too late that what the market gives, the market can take away, as, over the next several months, these large gains turned into large losses. Like many companies, Cisco never regained those lofty heights, and its stock price still stands more than 35% below the peak it reached in 2000.

Of course, what matters to investors now is what Cisco will do from here on out, not what it did 20 years ago. Could it go on another run for the ages? Will its stock fuel any more rags-to-riches investment stories? To better answer these questions, let's take a closer look at where the company is today and what its future might reasonably look like. 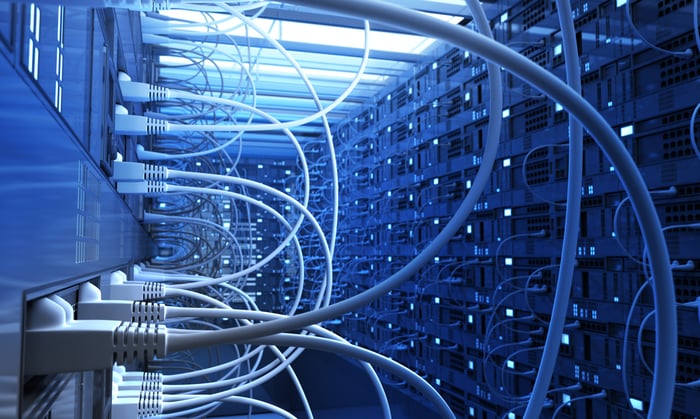 Cisco stands to benefit from enterprises spending more on cloud-based services and cybersecurity in the years ahead. Image source: Getty Images.

Where Cisco is now

When Cisco recently reported its 2018 full-year results, there was a lot for shareholders to like. Revenue grew to $49.3 billion, a 3% increase year over year, and non-GAAP earnings per share (EPS) rose to $2.60, a 9% increase year over year. While the revenue growth rate was modest, it did increase as the year went on. Better yet, Cisco is guiding for revenue to grow 5% to 7% in 2019's first quarter.

One of the primary advantages Cisco currently enjoys is the mountain of cash it is sitting on. After the new tax legislation was passed in late 2017, Cisco repatriated approximately $67 billion in cash and has since been putting this money to use for shareholders. In its Q4 alone, Cisco spent about $6 billion on share buybacks and $1.5 billion on dividends. In 2018, Cisco increased its dividend by about 13.8%, and it's probably not a stretch for shareholders to expect another double-digit increase next year -- since initiating its dividend in 2012, the company has always hiked it by at least a double-digit percentage per year.

Over the course of the entire year, Cisco returned about $17.7 billion to shareholders in the form of share repurchases and $6 billion in quarterly dividend payments. The company also has about $19 billion in authorized share buybacks it can make, meaning investors can continue to expect these tailwinds. Despite the liberal doses of dividend increases and share repurchases, at the conclusion of its 2018 fiscal year, Cisco was still sitting on $46.5 billion in cash and cash equivalents.

Where Cisco is going

Of course, no amount of cash could mask a declining business model forever, but fortunately for Cisco shareholders, that is far from a concern in the first place. There are two major developments that should drive Cisco's growth for years to come, even as some of its legacy businesses might show a decline: a shift to cloud-based architectures for modern-day IT infrastructure and the omnipresent need for cybersecurity. Cisco stands poised to benefit from both. In the company's Q4 conference call, CEO Chuck Robbins said:

[W]e believe that we are well positioned to capture growth across the portfolio with our pipeline of innovation. The broad adoption of multi-cloud environments is changing the very nature of how modern IT infrastructures are built and secured, and Cisco is at the center of this transition. ...

As we all know, the WAN is undergoing an architectural transition to a software-defined WAN to enable IT to rapidly respond to changing business needs in a digital and cloud world. Our customers are driving this transition and looking to Cisco to help them make this shift. Our SD-WAN portfolio leverages our leading networking products, automation, and robust security architecture to enable greater flexibility, increase bandwidth, and lower costs.

Don't get too lost in the IT gobbledygook speech. What Robbins is essentially saying is that software-defined wide area network (SD-WAN) offers companies multiple financial and operational advantages over existing connection hardware by using relatively cheap internet access and separating a network's performance from its hardware. Cisco's innovations in this area, Robbins believes, will ensure it stays on top of this trend. Gartner believes that by the end of 2019, more than 30% of enterprises will be using SD-WAN technology.

Cisco also stands to benefit from growth in its cybersecurity segment. In fiscal 2018, its security segment revenue grew to $2.35 billion, a 9% increase year over year. In August, Cisco announced its intent to acquire Duo Security for $2.35 billion. Duo Security specializes in multi-factor authentication, allowing users to securely log in to applications on a network. The acquisition nicely augments Cisco's growing bundle of cybersecurity services and products. In the conference call, while commenting on the acquisition, Robbins said, "Combining Cisco's network, end point, and cloud security platform with Duo's zero trust authentication and access solutions, we will be able to further enhance the industry's broadest and most effective security architecture in the market."

Can an investment in Cisco make millionaires out of shareholders? While it's tempting to insert a snarky joke here that it depends on how much money these investors are starting with, I think it's safe to say that Cisco's hyper-growth days from the late 1990s are probably never returning. That said, given Cisco's strong balance sheet and its positioning in major IT trends, I believe it stands a decent chance of offering investors market-beating returns. While that might not make millionaires out of today's shareholders, it might make a nice addition to several future millionaires' portfolios.