It's official: Boeing (NYSE:BA) has won the T-X Trainer contract.

That was the big headline last week when the Pentagon wrapped up its fiscal year with a flurry of high-dollar-value contracts, including the big win for Boeing. For $9.2 billion, Boeing will build anywhere from 351 to 475 new jet trainer aircraft to replace the Air Force's aging Northrop Grumman T-38C Talons, and supply from 46 to 120 ground training systems to learn how to fly them.

As I say, that was the big headline. But the big story could be a bit different.

Citing industry sources, Aviation Week says the U.S. Air Force was expecting to spend "more than $19 billion" to acquire its fleet of new "T-X" training jets -- more than $54 million per plane, including the cost of the flight simulators. Instead, if the Air Force orders the maximum number of planes now envisioned, it could end up getting them for less than $20 million apiece. 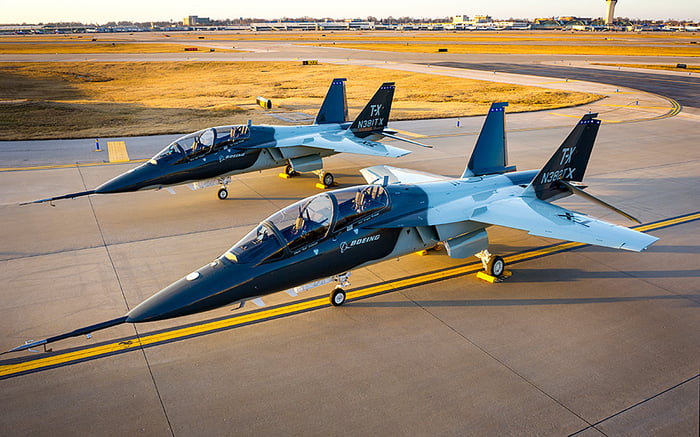 In winning the T-X contract (so called, by the way, because it's a "T" trainer jet, but still lacks an official model number), Boeing beat out competing offerings from Lockheed Martin and Italian aerospace giant Leonardo.

I, for one, don't find that surprising. As I explained back in 2016, at the height of this competition, both Lockheed and Leonardo made the strange choice to offer the Air Force training jets featuring just one vertical stabilizer on which to train to fly the Air Force's F-35 and F-22 stealth fighters -- both of which feature a twin-vertical stabilizer design. (This was especially strange for Lockheed, which builds both the F-35 and F-22 and should have known better.) In contrast, Boeing built a clean-sheet trainer jet utilizing two vertical stabilizers, mimicking the design of the F-35 and F-22, and a single engine like the more widely used F-35. (The F-22 has two engines, but is only used in the U.S., and only by the Air Force.)

And yet there's still a distinct possibility that Boeing's victory in the T-X contest could turn out to be Pyrrhic. Remember: Boeing submitted a winning bid some 64% below what the Air Force had expected to pay, a huge discount that Credit Suisse called "clearly aggressive" -- and one that probably doesn't leave much room for profit margin in Boeing's production contract.

Now, Boeing has resorted to similar lowball bids to win work in the past -- but at a cost. Boeing's offer to build 179 KC-46A refueling tankers for the Air Force back in 2011, for example, "cut its profit margin to the bone." So far the company has racked up about $3.4 billion in a series of "one-time" charges to earnings on that airplane's development, and it hasn't even begun production yet.

Will Boeing face similar troubles with the T-X contract? I suspect it might. Earlier in this contest, Boeing rival Textron tried to bid its Scorpion jet to become the Air Force's new trainer. At roughly $20 million, Scorpion's estimated list price is similar to what Boeing will get for its T-X -- however, Textron withdrew from the competition last year because the Scorpion, while perhaps cheap enough to win, wasn't good enough to win. Logically, for Boeing to build a better plane, it would need to charge more money. The fact that it isn't charging more money -- nowhere near the price the Air Force was prepared to pay, in fact -- suggests that Boeing will probably be building this plane at a loss.

Why would Boeing do that, and does it make any sense?

Perhaps. For one thing, there's a possibility Boeing is hoping to sell the Air Force T-X trainers at a loss, then make up the difference later when bidding to maintain and upgrade the plane over the ensuing decades. For another, there's the potential for Boeing to sell a lot more T-X trainers than just the 475 the Air Force says it wants. Globally, Credit Suisse estimates that there could be demand for as many as 2,600 units of training jets. If Boeing can capture a sizable portion of this market and spread its development costs over a large enough installed base, that could lower its unit costs to the point where incremental sales start generating incremental profits somewhere down the road.

There's also Boeing's strategic position to consider. As recently as a couple years ago, with sales of its F-15 and F-18 fighter jets drying up, Boeing defense division CEO Leanne Caret seemed to be preparing for a future in which Boeing would cease building fighter jets and focus on auxiliary aircraft -- bombers, subhunters, and refueling tankers, to be precise -- leaving its rivals Northrop and Lockheed to build smaller jets.

Winning the T-X contract, even at a loss, at least keeps Boeing alive in the small jet market, keeps its R&D department funded, and gives it a chance to win additional fighter contracts in the future.

Will those contracts be profitable? We may have to wait a while for the answer. Boeing isn't expected to begin delivering T-X trainers (or simulators) to the Air Force before 2023, with initial operating capability (a precondition for mass production) not expected before 2024. Thus it could be another half-decade before we start seeing this contract benefit Boeing's bottom line.

If it ever does.