One person's challenge is another's opportunity, and there are very few CEOs as bold and decisive in taking advantage of a chance to enhance value for shareholders as Emerson Electric's (NYSE:EMR) David Farr. Although the terms of Emerson's deal to buy General Electric's (NYSE:GE) Intelligent Platforms business weren't disclosed, it's likely that GE's desire to sell assets in order to raise cash means Farr's company wouldn't have overpaid to acquire a strategically important business. Let's take a look at the deal, and at what it says about both companies.

While the very-highly-regarded former Danaher CEO Larry Culp is now charged with turning around GE's fortunes, the executive with best recent experience in turning around a major industrial company is actually Emerson's David Farr. In just a few years, Farr has spun off the company's poorly performing network power business while maintaining Emerson's status as a Dividend Aristocrat -- 61 years of rising dividends and counting. 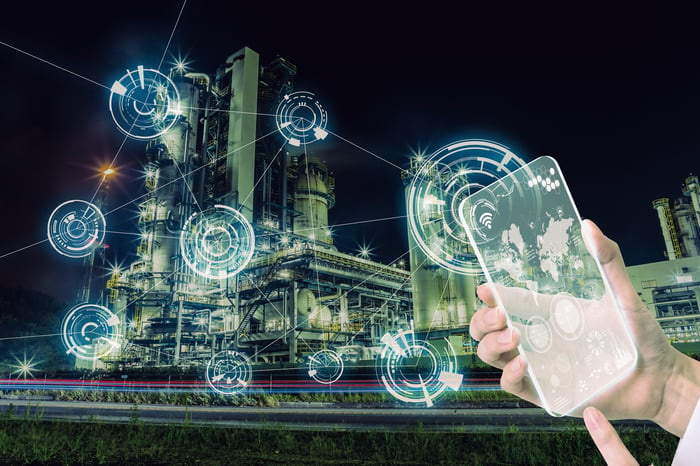 Process and discrete automation are both becoming more digitized, and Emerson Electric is investing in line with the trend. Image source: Getty Images.

It was no mean feat, considering the downturn that occurred in 2015-2016 from the impact of low energy prices on Emerson's core process-automation sales and the divestiture of a cash-generating business like Emerson Network Power. No matter: With the recovery in oil prices, and solid growth in its commercial and residential solutions businesses, Emerson's end markets have now turned up again. Moreover, Farr can't be accused of not trying to grab an opportunity to add value for shareholders.

For example, with Pentair deciding to focus on residential and commercial water solutions, Emerson struck to acquire that company's valves and controls business for $3.15 billion in 2017.

Similarly, in a bold and audacious step, Farr made a bid to buy Rockwell Automation (NYSE:ROK) for $225 a share (the price at this writing is around $172), though it ultimately failed. The idea was to add Emerson's strength in process automation (fluid materials process in heavy industries) to Rockwell's discrete automation (automated processes in manufacturing) while adding Rockwell's capability with programmable logic controllers (PLCs) -- a market dominated by Siemens and Rockwell.

PLCs are important because they act as the brains of automation and allow customers to better control and manage processing -- an activity acquiring even more importance as manufacturers digitize plants and connect factories, as part of the drive toward the Internet of Things (IoT).

All of this helps us understand Farr's desire to increase Emerson's presence in discrete automation, and add overall PLC capability, by acquiring GE's Intelligent Platforms business. According to the press release: "By interfacing Intelligent Platforms' PLC technology with Emerson's leading distributed control systems, customers will be able to connect 'islands of automation' within the plant to further enhance operational performance, safety and reliability."

It's a good move for Emerson: It adds PLC capability to the company's existing process, hybrid, and discrete markets, while taking advantage of GE's previous investment in the business. It's also in line with the trend toward digitization in the industry -- exemplified by Rockwell's recent $1 billion equity investment in PTC, owner of an industrial IoT platform called ThingWorx that enables companies to connect digital and physical assets.

All told, the GE Intelligent Platforms deal marks another step in Farr's transformation of Emerson Electric, and should be welcomed by investors.

While the deal won't be significant from a financial point of view, it's symbolic of what's happened at GE in recent years. Former CEO Jeff Immelt's desire to invest in digital capability wasn't matched by the strategic focus needed to best monetize the technologies produced. The lack of focus has had consequences in two ways relevant to this discussion.

First, the lack of sufficient cash flow generation appears to have hampered GE's development of other businesses. For example, ABB bought GE Industrial Solutions, with the aim of increasing investment in a business that was underperforming its peers.

Second, the merger between GE Transportation and Westinghouse Air Brake Technologies ("Wabtec") was partly promulgated by Wabtec's willingness to invest in the new company -- which GE might have had a hard time doing with GE Transportation, given the parent company's current difficulties -- while taking advantage of the digital solutions already developed by GE Transportation.

For GE investors the deal looks like a necessary move, albeit one that reinforces the idea that previous management lost focus on how to run the overall company. But there's no point crying over spilled milk, and the important thing now is that new CEO Larry Culp puts the GE house in order.

Meanwhile, Emerson Electric investors have reason to be happy. Buying GE Intelligent Platforms continues Farr's drive to increase sales and make the company relevant in the digital era while moving in on the PLC market. Throw in the fact that GE previously invested in producing ready-made solutions that Emerson Electric can now take full advantage of, and it looks like a good deal for Emerson's shareholders.