Please ensure Javascript is enabled for purposes of website accessibility
Log In Help Join The Motley Fool
Free Article Join Over 1 Million Premium Members And Get More In-Depth Stock Guidance and Research
By Harsh Chauhan - Oct 14, 2018 at 7:38AM

The company's latest results are pointing in the right direction, but delivering on this upcoming holiday season will be essential.

GoPro (GPRO -3.67%) has been giving investors a lot of hope after years of disappointment. The action-camera specialist recently unveiled its latest devices and claimed that the new HERO7 Black has achieved the strongest first-week retail sell-through in the company's history.

This comes close on the heels of the company's second-quarter results, which were so good that investors forgot the nightmare they were in earlier this year. The action-camera specialist has been bullish on 2018 and beyond thanks to strong demand for its high-end products. Management has even stated that the company should be profitable in the second half of the year. 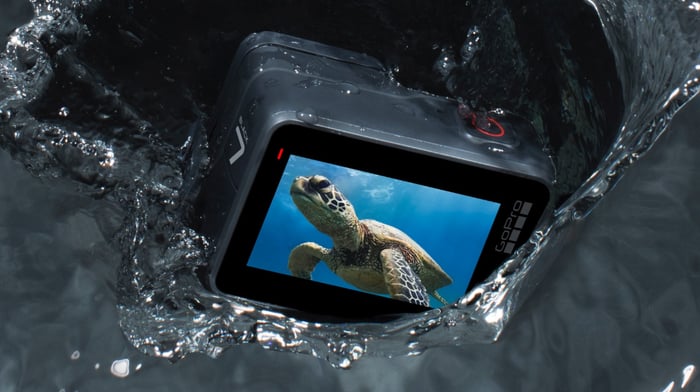 But will GoPro be able to live up to its newfound promise, or will it stumble once again?

Gearing up for a turnaround?

There are several things to like about GoPro right now, but two areas stand out in particular.

First, the company managed to keep its average selling price (ASP) at $264 in the last reported quarter, a decline of just 5% from the prior-year period's ASP of about $280. What's more, its ASP was stable quarter over quarter, so GoPro displayed solid resilience on the pricing front. This was despite the launch of a budget-friendly HERO camera in the first half of the year, which was priced at $199 to counter the low-cost competition in the action-camera space.

Second, GoPro's inventory levels came down by a third from last year to $86 million. At last year's ASP, this means that GoPro has around 325,000 cameras in inventory, and it shouldn't take long to go through them. This is the company's lowest inventory level since the first half of 2014, which indicates that the company's latest product strategy is working.

Consumers are still willing to pay a pretty penny for its premium action cameras, which is evident from the fact that 60% of its total camera sales came from last year's HERO6 Black flagship and the two-year-old HERO5 Black. So it was good to see that GoPro's action-camera sales increased ever so slightly year over year to 1.07 million units, bringing its year-to-date count to just over 1.8 million units.

The company believes that it can at least sell another 2.4 million cameras over the remaining two quarters, taking its total count to 4.2 million for the year. However, it is optimistic that it could end up selling more if it can source enough components, believing that the total end-market demand for its action cameras stands at 5 million units this year.

So GoPro management has done a good job of making investors believe that it's set up for a strong finish to 2018, driven by a refresh of its core product lineup. The company has launched three new action cameras in time for the holiday season at the $199, $299, and $399 price points, and the thin inventory channel means that it is well-placed to replenish its pipeline with these new cameras in a bid to boost sales.

Despite management's optimism, the company's history of poor execution means that investors shouldn't just buy its projections at face value.

GoPro investors were burnt badly last holiday season after the company overestimated demand for its new products. It had to subsequently resort to deep discounting to clear the shelves, but even that proved to be difficult as unit sales fell 40% year over year. As a result, GoPro missed its original sales guidance by a huge margin. Turn the clock two years back, and the situation wasn't any different. GoPro had witnessed sharp sales declines in each quarter of 2016, as it chose to discontinue its action cameras to reposition the product lineup.

CEO Nick Woodman continues to emphasize that there's no shortage of demand for GoPro cameras, and the latest quarter's sales numbers seem to justify that. Woodman also believes that GoPro now has a better idea of optimal pricing and demand, so it can avoid repeating past mistakes. This is why the company is confident in hitting $390 million in sales during the final quarter of 2018, which would mark an impressive jump from the prior-year holiday tally of $335 million.

But hitting that target will be easier said than done, since GoPro needs its new camera lineup to strike a chord with customers. The early signs are positive, but investors need to keep their hopes in check: Any weakness in demand could spell trouble once again during the most important time of year for GoPro.