MoviePass owner Helios and Matheson (OTC:HMNY) saw its market cap surge in value yesterday -- then gave it all back by day's end. Today, the rout gets even worse, with multiple news outlets reporting that the New York Attorney General's office is "investigating" Helios to determine if the company has "misled the investment community regarding the company's financials," says CNBC. 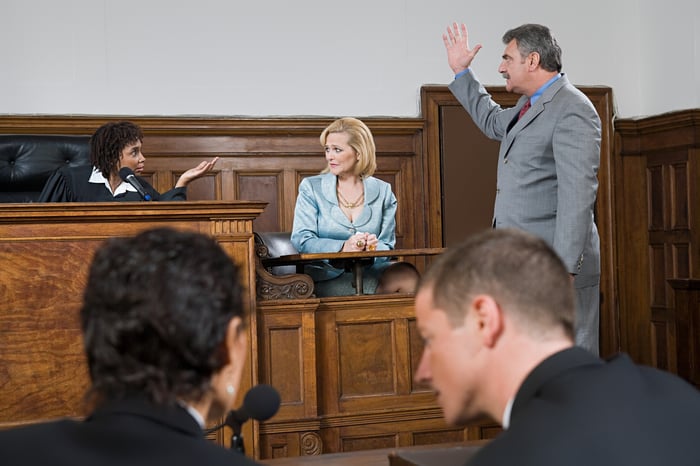 Is this a scene from MoviePass's future? Image source: Getty Images.

Details on what exactly New York thinks MoviePass's owner has done wrong remain sketchy at present. In a statement, Helios said it was "aware of the New York Attorney General's inquiry" and was "fully cooperating" with it, but the company had not filed any statements with the SEC containing the details of what it is "aware" of. Neither has the AG's office published any press release containing further details.

Twist my arm and make me guess?

I'd hypothesize that the most likely target of NY AG's inquiry is Helios and Matheson CEO Ted Farnsworth's controversial statement to the media earlier this month, to the effect that Helios had secured "$65 million in new funding last month" (emphasis added). That one confused a lot of investors and necessitated a quick SEC filing by Helios to explain precisely what Farnsworth meant. Unless and until we learn of allegations of actual financial shenanigans, the CEO's statement -- being the most recent statement by the company regarding the state of its "financials," seems the most likely suspect to have allegedly "misled" investors.

Details of the investigation will eventually emerge. The fact that investors have decided to shoot MoviePass stock first and ask questions later probably shouldn't change your opinion of the stock. Instead, focus on the facts:

MoviePass is a debt-laden, cash-burning, unprofitable company, facts that probably don't make it a great prospect for a winning long-term investment. At the same time, MoviePass's parent company is holding a shareholders' meeting to approve a reverse stock split today -- which could make its stock price rise (or fall, or both) anyway in the short term.