Chart Industries, Inc. (GTLS 3.24%) reported third-quarter results on October 18, delivering yet another period of solid results as its restructuring efforts during the energy downturn bear fruit. However, after multiple years of cost-cutting, operational improvements, and a handful of strategic acquisitions, it doesn't look like the company plans to slow down anytime soon.

Just prior to earnings, Chart announced two more big deals, one to unload its somewhat problematic oxygen-related healthcare subsidiary, CAIRE Medical, and another to acquire a more complimentary Europe-based pressure equipment manufacturer, which serves Chart's cryogenic equipment market as well as the "warm" side of the energy industry. 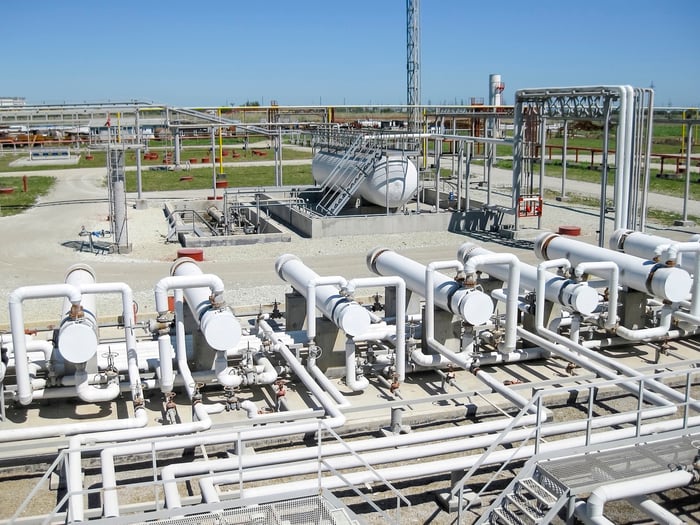 Let's take a closer look at Chart's strong third quarter, as well as how the company plans to continue driving growth going forward.

Here's a closer look at how Chart is doing across some key metrics:

First things first: In order to normalize Chart's results in the future, the numbers reported above -- both for last quarter and the comparable 2017 period -- exclude results from CAIRE Medical, which will be shown under discontinued operations until the sale is finalized, likely sometime before the end of the year.

The company delivered strong results across the board, with revenue, orders for future sales, earnings, and margins all improving from the year-ago period.

The big jump in earnings per share was substantially a product of higher margins. Chart's gross margin dollars surged $24.4 million higher year over year, delivering the vast majority of the company's $25.5 million increase in earnings before income taxes, or EBIT.

Chart also saw its operating expenses fall in the quarter. Selling, general, & administrative expenses were $45.8 million in the quarter, down $2.3 million from last year and from the second quarter of 2018.

One last -- important -- thing on Chart's sales: It's not just acquisitions driving the growth. Organic revenues were up 16% in the quarter, nearly half of its sales growth,

Returning to its industrial and energy roots

In 2012, Chart expanded its oxygen-related business into the healthcare arena, acquiring CAIRE Medical, which makes and sells oxygen therapy equipment. On the surface, this move made sense, as it would help the company diversify away from its highly cyclical core energy and industrial manufacturing customers. Unfortunately, it never worked out as well as planned.

CAIRE Medical's AirSep products proved to be highly problematic, generating far higher warranty claims than anticipated and costing the company millions in unexpected expense. Additionally, there was essentially no manufacturing overlap with Chart's other segments, something that became apparent during the company's ongoing restructuring in recent years.

This led to the company finally deciding to "cut bait" earlier this year, announcing in its first-quarter earnings release that it was conducting a "strategic review" of the business. On October 1, the company announced it had reached a deal with NGK Spark Plug Co. to sell CAIRE Medical for $133.5 million.

This deal was preceded by a September 27 announcement that Chart had reached agreement to buy Italy-based VRV Group for approximately $226 million (the final price in U.S. dollars will depend on currency exchange when the deal closes) in cash and assumed debt. With operations in Italy, France, and India, VRV manufactures pressure equipment for the cryogenic and energy & petrochemicals industries.

Management views VRV as a far more complimentary business for Chart than its soon-to-be former healthcare subsidiary. The company will gain a group of products with which it doesn't currently have much overlap, while also expanding its geographical footprint in Europe and India. Its Italian and French operations will also give it better access to the Middle East and Africa.

VRV is expected to generate $115 million in sales in 2019, and management expects it to be accretive to Chart's earnings within the first full year of ownership.

Both the sale of CAIRE Medical and the purchase of VRV Group are expected to close in the fourth quarter. In the earnings release, CEO Jill Evanko said:

...the strategic reallocation of capital from the pending sale of CAIRE to the acquisition of VRV will allow us to grow faster than originally forecasted in 2019 and achieve our margin targets earlier in our three-year outlook.

The company said the resegmentation of the business would result in $2.5 million of immediate annual SG&A expense savings.

Chart also updated its full-year guidance heading into the fourth quarter, both a result of shifting CAIRE Medical into discontinued operations and also based on slightly higher expectations for sales in the fourth quarter.

Heading into 2019, Chart appears to be in very solid shape. Management gave initial guidance for $1.24 billion to $1.30 billion for 2019 sales, or 16% to 18% of growth with 6% to 7% of that coming from organic sales. Adjusted earnings per share are expected to be between $2.40 and $2.75 per share, excluding any restructuring or transaction-related costs. The guidance is also based on closing both the VRV and CAIRE Medical transactions before the end of 2018.