Restaurant stocks have been a bit of a mixed bag recently. Investors need to look no further than Papa John's battle with its founder, John Schnatter, which has sent its stock tumbling more than 20% over the past year, as an example. Other restaurant companies aren't fighting with their founders but are still trying to adapt to America's changing food preferences and the rise of food-delivery services.

However, there are plenty of bright spots in this market as well. To help investors find a few top restaurant stocks worth watching, we asked three Motley Fool contributors for their recommendations. They came back with Restaurant Brands International (NYSE:QSR), Starbucks (NASDAQ:SBUX), and Domino's (NYSE:DPZ). Here's why. 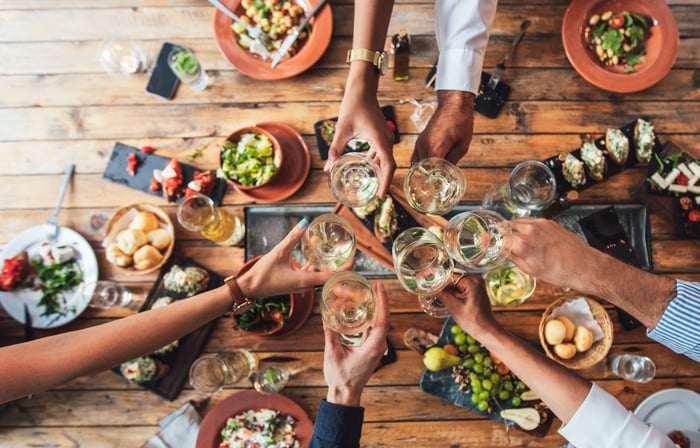 Nicholas Rossolillo (Restaurant Brands International): You know Restaurant Brands International as Burger King -- or Tim Horton's north of the border -- and the fast food chain purchased Popeye's Louisiana Kitchen in early 2017 to cover its bases in the fried chicken department. The stock is one of Warren Buffett's top holdings, and shares have been among the best performers among restaurants in spite of difficult industry conditions, rising 56% over the last three years.

But why Restaurant Brands now? Given stock market turbulence as of late and growing concerns that an economic slowdown is looming, value-oriented chains like Burger King and Tim Horton's should be able to weather the storm. Even after its strong growth the last few years, Restaurant Brands carries a trailing price-to-earnings ratio of 17.9 and pays an annual dividend currently yielding 3.1%. That's one of the best payouts in the restaurant stock universe.

Though restaurants are a cyclical business, fast food is likely to fare better than average. That's because, in the event consumer spending cools off, households tend to flock to cheaper alternatives. That's just what Restaurant Brands offers: cheap food. I would cite McDonald's (NYSE:MCD) as an example of this playing out. During the financial crisis from 2007 to 2009, sales barely skipped a beat, and profits continued to rise. That helped keep its stock afloat, in stark contrast with the broader market.

I'm certainly not predicting a catastrophic event, but if the economy does take a breather, Restaurant Brands stock could be a safe haven of sorts. With well-entrenched brand awareness catering to the budget conscious, an attractive valuation, and a good dividend yield, I think this chain is worth a look.

The definition of takeout

Danny Vena (Starbucks): While technically not a "restaurant" stock, it bears enough similarities that I'm willing to make the stretch -- and with good reason. Investors in Starbucks haven't been getting the buzz they previously got from the coffee purveyor. In fact, over the past three years, the stock has been essentially flat, while the S&P 500 (SNPINDEX:^GSPC) rallied 38%.

What's weighing on the once-high flyer? After years of impressive growth, an inevitable slowdown happened. Just three years ago, Starbucks was posting year-over-year domestic same-store-sales growth of 9%. For 2018, the company originally guided for 3% to 5% comps but recently announced that it would only achieve 1% year-over-year comps for the upcoming third quarter.

Several factors led to its slowing growth. The company struggled with throughput at its stores during the morning rush, and customers were skipping their high-margin afternoon Frappuccino. Starbucks has also had difficulty navigating China, one of the primary linchpins in its recent turnaround effort. And former CEO Howard Schultz has finally walked away from the company after orchestrating a masterful turnaround that began during the recession in 2008.

With all that working against Starbucks, why should investors take heart? The company is executing on its long-term strategy to return to growth. The Starbucks Rewards program is expanding to capture more casual visitors, adding 1.9 million new active members in the third quarter. The company is also innovating and says it has a full pipeline of new products that could drive future sales. Starbucks is also partnering with Alibaba (NYSE:BABA), aimed at expanding the brand in China.

With all the bad news baked into the stock price right now, it sports a P/E ratio of just 18 -- near the low end of the company's historic trading multiple. Starbucks also pays a dividend that currently yields 2.5% and has embarked on an aggressive share repurchase plan.

Starbucks is on sale and has significant upside -- and that certainly bears watching from here.

Chris Neiger (Domino's): Despite investors' disappointment in Domino's most recent quarter (more on that in a second), there is plenty to love about this company's continued revival. Over the past year, shares of Domino's have popped 40% as the company has delivered on improving its products and rolled out new technologies to make it easier and more convenient to order its food.

If you read the quick headlines from Domino's recent quarterly earnings, you'd think the company was in trouble again. Investors weren't happy that the company missed Wall Street's expectations for revenue growth and same-store sales. But those worries are little short-sighted when you consider Domino's actual results.

For example, the company's sales jumped 22% in the third quarter to $786 million, net income popped 49%, and same-store sales at company-owned stores grew by 4.9% from the year-ago quarter. For those of you who've been following along at home, Domino's has had 30 consecutive quarters of same-store sales growth in the U.S. Investors were too focused on analysts' predictions and missed the strong results Domino's continues to put up.

In addition to Domino's growth is the fact that the company has the opportunity to benefit as rival Papa John's continues its tumultuous distancing of its founder and former CEO and struggles to retain customers. Papa John's fell this year from the No. 2 favorite pizza brand in America to No. 5, while Domino's held the top spot, according to data from Brand Keys Customer Loyalty Engagement Index.

Investors looking for a piping-hot restaurant stock that's managed to turn its business around over the past few years -- and outpace its rivals -- need look no further than Domino's.